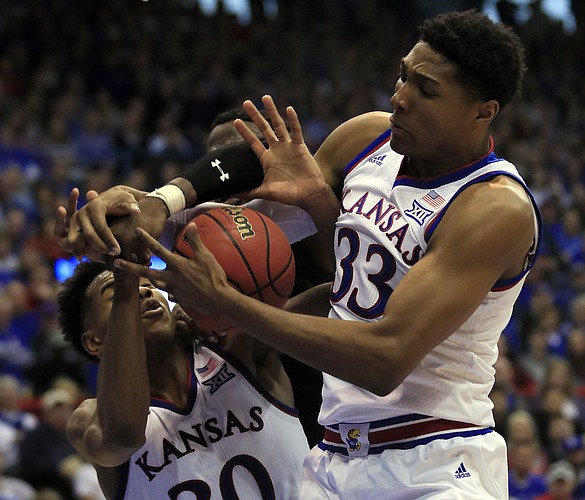 With the KU men’s basketball schedule now complete, here’s a quick rundown of what’s to come for the 2018-19 Jayhawks.

In addition to entering the season with high hopes and big expectations, Kansas will be looking to avenge last season’s third-place finish in the Big 12 Conference race that ended a streak of 14 consecutive Big 12 titles.

There’s no question that Bill Self’s squad has the talent, depth and experience to make a run — and likely will be considered the Big 12 favorite in the eyes of most pundits — but the conference is not without legitimate challengers again this season.

Whether you’re talking about a new-look and reloaded Texas Tech squad fresh off its first Final Four appearance under head coach Chris Beard, a tough Baylor team that has been ranked in most of those too-early Top 25 polls or the always challenging foes like Iowa State, West Virginia and even Kansas State, KU’s final 19 games of the regular season are sure to be full of challenges, twists and turns.

As big as some of those Big 12 rivalries are, and as exciting as that potential meeting with Michigan State in the title game of the Maui Invitational would be, it’s hard to look past the season opener for this one.

Kansas vs. Duke, 6 p.m. on ESPN at Madison Square Garden in New York City. It doesn’t get any bigger than that.

Whether you’re talking about the will to win or the stage it’s played on, kicking off the season in style with a showdown against another blue blood program is one heck of a way to get things started.

The Blue Devils might not have Zion Williamson on the roster any longer, but they’re still loaded with talent and even have a couple of almost-Jayhawks in five-star forward Matt Hurt and talented guard Cassius Stanley.

This one will be fun.

Easy call, right? Like clockwork, the Jayhawks will be making their every-four-years appearance at the Maui Invitational in late November, and this year’s field is loaded.

KU gets host school Chaminade in the opener, but then could face UCLA and Michigan State during the next two nights.

Kansas played UCLA in Maui the last time they were there (in 2015) and that win propelled them to the Maui title.

The Big 12 schedule is pretty balanced, with KU not having to venture too far from home for too long in January and February.

With that in mind, let’s go ahead and take a look at the six-game run from Dec. 21 through Jan. 18. It opens with an 11 a.m. game at Villanova in Philly and also features the always-tough, post-Christmas contest on Dec. 29, when the Jayhawks play at Stanford. After that, it’s right into the Big 12 grind, with Bob Huggins and West Virginia up first, a road game at Hilton Coliseum up second and Baylor coming to Lawrence on Jan. 11 for Game 3 of the Big 12 grind.

KU follows that up with road games at Oklahoma and at Texas before returning home to host Kansas State.

Those might not all be the toughest opponents, but there’s no gimme game in there and their play during that stretch will likely determine how rocky (or not) the road through the Big 12 will be this season.

While Monmouth, Chaminade, Kansas City and UW Milwaukee aren’t likely to pose much of a threat to the Jayhawks, there are a couple of teams with small names that could be big challenges during the upcoming season.

The first is UNC Greensboro. Three nights after KU’s clash with Duke, the Jayhawks will be back home for their Allen Fieldhouse opener against a team coming off of its best season in school history.

Head coach Wes Miller led the Spartans to a 29-7 record last season and UNCG was in the conversation for an at-large bid to the NCAA Tournament. As a result, they earned a No. 1 seed in the NIT and finished the year ranked No. 87 in the KenPom ratings.

Eleven days later, on Nov. 19, East Tennessee State comes calling. Head coach Steve Forbes led the Buccaneers to 24 wins and a No. 80 rating in the final KenPom rankings a season ago. And that was with a schedule that feature road games at Creighton and Illinois and two close losses to NCAA Tournament darling (and 2018-19 KU foe) Wofford.

KU will be favored in both of these games. And they should be. But just because those teams play in smaller conferences does not mean that they could not show up and give KU a run for its money.

Don’t overlook this one

No, it’s not a conference game any longer, but the Colorado Buffaloes’ return to Allen Fieldhouse on Dec. 7 is a game that should be taken seriously.

CU coach Tad Boyle, a former KU player, will be bringing a talented team to his old stomping grounds, and the Buffs are also ranked in a lot of those too-early Top 25 polls.

Wrote ESPN.com’s Jeff Borzello, who had CU ranked 24th in his latest updated preseason poll in August: “Colorado isn't getting the attention of Arizona or Washington or even Oregon, but the Buffaloes are going to be a factor in the conference title race. All five starters are back from a team that won 12 of its final 15 games... The Buffaloes can make a statement in early December with a trip to top-five Kansas.”

I’ll go with the regular season finale, which takes Kansas to Lubbock, Texas, for a showdown with Texas Tech.

I’m a big believer that KU will roll to a comfortable Big 12 title this season — winning the conference by two or three games would be my guess — but if it’s tight and if the Jayhawks need to play well down the stretch to hoist the hardware, you can’t help but think that this one could be an absolute monster of a game.

Not only is Texas Tech one of KU’s toughest challengers this season — and likely all seasons for the foreseeable future — but Lubbock also has turned into a pretty tough place to play, with the home fans creating a rocking environment and KU not having fared too well there during recent years, even when emerging victorious.

Mark it down: 1 p.m., March 7, 2020 on ESPN. Even if it’s not a game that’s for the league title, it could have seeding implications and also could be primed to send Kansas into the postseason on a high note with a strong showing.

No matter how good you feel about the hire of Ramsey Nijem as KU’s next strength and conditioning coach, (you should feel great, by the way) you’re likely going to keep an eye on how things are going with old weight room boss Andrea Hudy down in Austin, at least for the next year or two.

With that in mind, you might as well circle a couple of dates that will feature Hudy reunions as subplots to the action on the court.

The first comes Jan. 18, when KU travels to the Erwin Center on a Saturday afternoon to take on Hudy, Shaka and the Longhorns.

The next, Hudy’s homecoming, is set for Feb. 3, when UT comes to town for a Big Monday battle just two weeks later.

You may already know that the Final Four this year is in Atlanta. But do you know what KU’s road might look like before that?

Here’s a best guess, based on the fact that I think KU will be a 1 or 2 seed and won’t be sent out to a place like Salt Lake City for the opening rounds like last March.

Omaha and St. Louis are the closest first- and second-round sites, but I’ll predict Omaha as of today. There’s something about that city and Kansas’ ties to it in the tournament.

After that, it’s down to Indianapolis and Houston as the next potential stops. Given that Indy is hosting the Midwest Regional and Houston the South (where Duke, Kentucky and North Carolina reside), we’ll go with the Omaha-Indianapolis path for Kansas to reach Atlanta.

That’s not quite Tulsa and Kansas City or Wichita and Omaha, but it’s close. And both destinations would be easy options for KU fans to flock to.

No mention of not having all the games televised, 10 games including several conference games being relegated to a streaming service, this is by far the ugly of the schedule. I don’t understand how this as not received more attention, blue blood program in a power five conference no longer having all their games televised, does Kentucky, Duke or North Carolina have any of their games dropped to the ‘net? Only the Big 12 would agree to this, unreal.

That’s mentioned plenty in the story announcing the schedule (first link in this blog)... This was more of a look at the actual games.

As for the attention, I think it’s been received with mixed reactions but there’s little doubting that more of this is coming and this is the future of sports on TV. Amazon, Hulu, Facebook, Apple, Disney, Netflix, ESPN & more... they’re all formulating plans to stream all kinds of content, including sports.

You don’t have to like it, but it’s probably a good idea to start preparing for it and getting used to it.

Steve has a good point...

KU, a "blue blood program in a power five conference no longer having all their games televised, does Kentucky, Duke or North Carolina have any of their games dropped to the ‘net?"

Yes, they both have multiple games that are only available on their SEC/ACC streaming services.

ESPN+ is a must to subscribe. It is unbelievable what you can watch. Sports other than basketball and football. Reasonable cost yes different but great potential. Internet will be a necessity in the future.

Matt, I don't see KU's tournament path going through Indy if they're a 1 or 2 seed because of Michigan St. MSU is the best team on paper and if they play like that all year, there's a good chance they get seeded above KU and get the Indy path. I think it's more likely KU ends up going through Houston or sent out west to LA unless KU ends up as a the 7th or 8th overall seed in the NCAA tournament.

I do hope KU raises issues with 10 games being on ESPN+ as opposed to ESPN's TV networks.
I understand it to some degree with the lesser home non-conference opponents.

But 2 WVU games, ISU and TCU as streaming games? Especially at Ames not on TV? Sorry that's insane. KU games always get ratings for ESPN, so there's no way they can use that excuse.

Do you know any specifics of how this deal with Big 12 Now/ESPN+ is set up Matt? It just seems like we're getting less product for more money. And then having to pay extra to stream it.
Which I do by the way, but it seems like KU is kinda getting screwed with that.

I think the choice of which games are streaming is more puzzling than how many. Why didn't they stream the games against the teams projected to be bottom feeders this year and those who don't historically (at least recent history) produce nail-biting games?