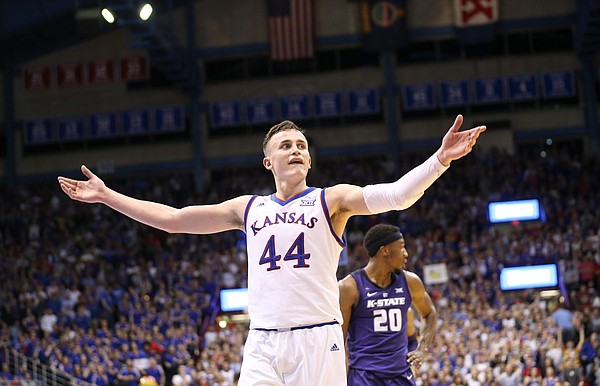 Kansas forward Mitch Lightfoot (44) raises up the Fieldhouse during a Jayhawk run in the second half, Monday, Feb. 25, 2019. by Nick Krug

I’m not going to lie, Jayhawk fans. I think this is actually the year.

After hearing chatter about KU forward Mitch Lightfoot possibly redshirting during each of the past two seasons, the KU men’s basketball roster finally looks stacked in Lightfoot’s favor — or against him, depending on how you look at things — to sit the season out.

Nothing is by any means official yet, and it might not be for a long time. Remember, there is no drop-dead date for a player to redshirt. KU fans know that well from the recent experience of Ochai Agbaji planning to redshirt last season and then being called into action midway through after injuries opened up an opportunity.

Agbaji made the most of it. And Lightfoot, whether he plays or doesn’t, will, too. He’s the ultimate team player, he’s a guy KU coach Bill Self can trust in just about any situation and he’s experienced enough to know what it takes to prepare right and stay ready for anything.

He also loves Kansas as much as anybody and would gladly do what’s best for the team. If that means he sticks around another season and possibly sees his potential for playing time go up, I can’t see him hating that one bit.

But who knows what will happen. For now, let’s get to it and take a quick look at two answers for each scenario with KU forward Mitch Lightfoot.

He Will (redshirt): Be the best insurance policy in the Big 12

If Lightfoot does in fact plan to redshirt, the only thing that likely would pull him out of that plan would be an injury — or perhaps two — to the KU big men ahead of him in the rotation.

Given the recent history of KU’s front court and how quickly apparent depth has turned thin, it’s certainly possible that Lightfoot still could find a role in this year’s rotation. But it would seem like a clear picture of how he could get at least 10-12 minutes per game would be needed for him to use his final season of eligibility.

He Will: (non-redshirt): Win a game or two for the Jayhawks almost single-handedly

Remember that TCU game in Fort Worth when Lightfoot had like 9,378 blocks? Or how about last year’s must-win K-State game at Allen Fieldhouse when Lightfoot’s energy and ferocious roar all but won that game for Kansas by itself?

Yeah. He has that in him. And if he plays this year, he’ll have another night or two like those. The guy cares too much, scraps too hard and competes with too much tenacity not to find his way into a couple of those types of nights.

He Won’t (redshirt): Let his status impact his ability to be a quality leader

Whether you’re talking on the court, off the court, on the bench or in practice, Lightfoot’s presence as an upperclassman who has been there and done that can fill an important role on this team even if he’s not playing.

His willingness to call guys out, hold teammates accountable and bark instructions during practices can go a long way — especially for the newcomers — and his experiences from seasons past can help even the most savvy Jayhawks, as well.

He Won’t (non-redshirt): Be quite as sore night in and night out

Because Lightfoot often has found himself as one of the few healthy big men on the KU roster, he often has had to battle with dudes much bigger than him. Luckily for the Jayhawks, Lightfoot has never once backed down from a challenge — not even that bruiser in Italy who tried desperately to get Lightfoot to fight — and has always been ready and willing to do whatever the coaches needed him to do.

This year, if he plays, he might have the luxury of getting a bit of a rest on the defensive end. That’s not to say that he won’t be required to hit the glass and protect the paint, but he might do so without the other team’s biggest players leaning on him all game.

Silvio De Sousa, Udoka Azubuike and David McCormack are all much better equipped to handle that kind of a beating. And even if one of them were to go down, therein forcing Lightfoot into action, KU still would likely have a player or two who could keep Lightfoot’s body in better shape than it has been in past years.

He Might (redshirt): Add to his cult hero persona even without playing

One of our photographer, Nick Krug’s, favorite things to do in recent years was to quickly pan over to the bench after a big time play on the floor just so he could get a shot of Lightfoot’s reaction.

It became so common that even Lightfoot seemed to know it was coming and often had something new waiting for Krug when his camera reached the bench.

That attitude, along with his newfound Prison Mitch persona, has created a cult hero of sorts and Lightfoot has exactly the right personality to embrace it. Even if he’s not playing, you can bet the KU senior will find a way to get noticed, whether on the bench or somewhere on social media.

KU coach Bill Self is never going to draw up a play to get Lightfoot a 3-point shot. But he might not be afraid of letting him shoot a few more this season.

The senior forward’s shooting stroke has improved each year he’s been here and his confidence has gone up with it.

Beyond that, he often looks good stepping into rhythm 3-pointers and has the basketball IQ and discipline to know the difference between a good attempt and a bad one.

If he plays this year, I could see that number going up just a smidge. Maybe not to 25 or 30, but definitely to 20, especially if he were able to hit 10 of them.