Just how good were KU and West Virginia's wins over ACC teams last week and what does that mean for Week 4? 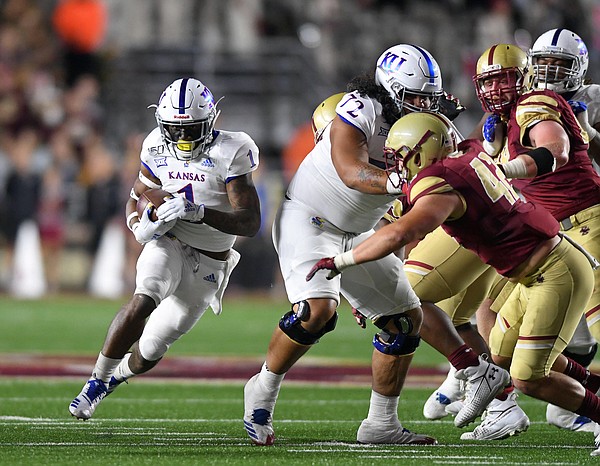 Quick question for the group: Did Kansas and West Virginia figure things out in time to turn around their seasons last week or is the ACC simply down?

The answer to that is not yet known, nor will it be for several weeks.

After all, Clemson is still in the ACC, so it’s kind of hard to trash the entire conference, and 3-0 Virginia is also currently ranked in the AP Top 25.

Beyond that, though, there’s not much to write home about on the Atlantic coast. At least not yet. Traditional powers Miami, Fla., and Florida State, which each entered the season with high hopes, are off to 1-2 starts, with their lone wins coming over Bethune-Cookman and Louisiana Monroe.

After that, Boston College, Wake Forest and NC State appear to be the toughest challengers in Clemson’s division, and two of those three (BC and NC State) were rocked by Kansas and West Virginia last week.

And Virginia Tech, which lost to BC in Week 1, along with Duke and North Carolina, appear to be among the tougher teams in Virginia’s division. So, yeah.

Don’t take this blog to be the end-all-be-all of a Big 12 vs. the ACC breakdown because comparing the two is not exactly clean and easy. Not only does the ACC have four more teams but it also already has had a few schools play conference games this season while the Big 12 opens its conference slate this week.

The ACC’s top 10, which includes just Clemson and Miami, Fla., in Sagarin’s Top 25, has a total of 365 and an average ranking for the entire 14-team conference of 49.4, with Boston College setting the low bar for both leagues at No. 96.

Per RealTimeRPI.com, the Big 12, through three weeks, ranks third nationally, with an overall record of 22-5 while the ACC ranks fifth with a 26-16 mark.

To be fair, the ACC’s strength of schedule as a whole ranks No. 1 in the nation right now while the Big 12’s ranks sixth. What’s more, four of those five Big 12 losses came to Power 5 foes, with the only one not residing in the Power 5 being KU’s home loss to Coastal Carolina.

Again, this is not designed to be a head-to-head comparison of teams in the Big 12 and ACC, and none of this will matter even a little bit the rest of the way. Even if the Big 12 and ACC find themselves squaring off in postseason bowl games, the only time people will truly care is if that comes in the College Football Playoff semifinals or title game.

The reason behind this blog was to examine just how good those recent wins by KU and West Virginia really were. Both teams obviously played quality football. There’s no denying that. And both were fairly substantial underdogs going into those games, with NC State favored by a touchdown and BC favored by 21.

Not only did the Jayhawks and Mountaineers beat BC and NC State, but they beat them by an average of 21 points and combined to score 92 points in the process. This against teams picked to finish third and fourth (of seven) in the Atlantic Division in the preseason polls. One of them (NC State) even received two first-place votes before the season began.

Comparison or no comparison, it is interesting that KU and West Virginia are facing off the very next week after they both picked up big wins over ACC programs. Maybe the result of this week's Big 12 opener will tell us which team had the better win a week ago.

Either way, confidence is likely sky high for both teams and the Jayhawks and Mountaineers no doubt are preparing for this week’s Big 12 clash — 3:30 p.m. on ESPN+ Saturday at David Booth Kansas Memorial Stadium — with the idea that this is a winnable game, partly because of who their opponent is on Saturday and partly because of the teams they just beat.

Moving on from the ACC, here’s a quick look at how the Big 12 has fared thus far against other Power 5 programs:

vs. ACC: 2-0 – KU and West Virginia both handed out beat downs against ACC foes in Week 3, with Kansas winning at Boston College last Friday and the Mountaineers knocking off NC State at home.

vs. Big Ten: 1-1 – TCU took care of business with a convincing win at Purdue, but Iowa State dropped a one-point, lightning delayed game to in-state rival Iowa with ESPN’s College Gameday in town.

vs. Pac-12: 2-1 – Oklahoma rolled at UCLA and Oklahoma State knocked off Oregon State on the road. Texas Tech, meanwhile dropped a low-scoring game at Arizona in Week 2.

vs. SEC: 1-2 – K-State knocked off Mississippi State last week in Starkville, but Texas dropped a home game to LSU, 45-38, before that and West Virginia was drubbed at Missouri in Week 2.

So even more perspective:

The SEC loss by Texas was probably the one that affects the championship perspective the most. I personally think Texas got some because their Texas votes, I think they are good, but they have some distance to go. OU I think is really good this year.

A win against WVU for KU will really setup some excitement for the school. I still think this is the "easiest" game left on the schedule and that shows how hard it will be to win games this year.