2 years after calling out KU, Baker Mayfield is back in the middle of a handshake controversy 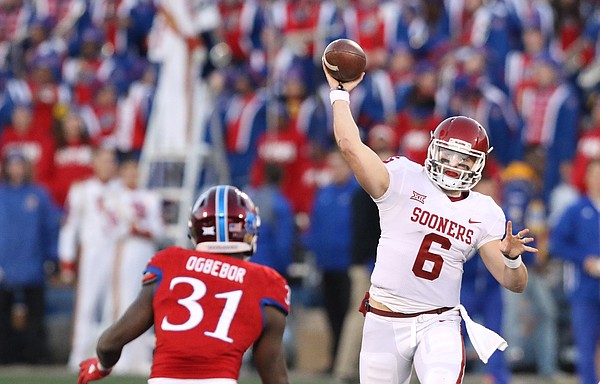 It’s been nearly two years since Joe Dineen Jr. and the rest of the Kansas football captains walked to midfield at Memorial Stadium and refused to shake hands with the Oklahoma Sooners and future Heisman Trophy winner Baker Mayfield after the opening coin toss.

Evidently, that’s long enough for Mayfield to forget how he felt about that move.

After that game, a 41-3 drubbing by the Sooners in November of 2017, Mayfield was asked about the pregame snub and said he had no idea where it came from.

Fast-forward to Monday night, with Mayfield and the Cleveland Browns in San Francisco for an equally lopsided Monday Night Football game with the 49ers, and you’ll find something that doesn’t quite add up.

This time, it was Mayfield and his team on the opposite end of both the drubbing and the handshake controversy.

Rather than shaking hands with the Niners to open the game, Mayfield chose the route taken by Dineen and the Jayhawks two years ago, drawing the ire of San Francisco’s all pro cornerback Richard Sherman.

"That's some college (expletive),” Sherman told reporters after the game, according to NFL.com. “It's ridiculous. We're all trying to get psyched up, but shaking hands with your opponent — that's NFL etiquette. And when you pull bush league stuff, that's disrespectful to the game. And believe me, that's gonna get us fired up.”

“Respect the game,” Sherman added. “You can have rivals, but pay your respect in that moment — especially when you’re young. He hasn’t earned anything in this league. How many games has he won? He’s acting like he was the MVP last year. If (Patrick) Mahomes did that, it would be one thing. But he would never do that, because he has too much respect for the game.”

Throughout the day Tuesday, as Sherman's comments made the rounds, videos from that pregame coin toss began to surface.

Several of them, from different angles, actually showed Sherman and Mayfield shaking hands before the coin toss. Mayfield appeared to shake hands with all of the 49ers players gathered on the field for the toss.

When asked about the videos, Sherman immediately apologized, saying, "Sometimes you remember things a little differently than it happened. Obviously it still motivated me the same way."

"It's definitely my bad," Sherman told the Pat McAfee Show. "I never want anybody to have to deal with some stuff that they didn't do. And so, you know, the questions that he's gonna get and the annoying, nonsense questions about some stuff that happened in a game that's already been done, you know, sure he'll get an apology for that. I'll probably reach out to him via text or social media to actually get ahold of him and talk to him ... on the phone. He definitely deserves an apology, and that's my bad on that."

I wouldn't want to shake Richard Sherman's hand either.

Yes, can we please get someone else's take on the incident instead of the lowlife Sherman. It would carry more weight coming from a respectable individual.

I really liked how the 49ers beat Mayfield around like a red headed stepchild!