The Kansas men’s basketball program on Thursday picked up its second Class of 2020 commitment of the week.

Four-star prospect Gethro Muscadin, a 6-foot-10, 215-pound center from Aspire Academy in Louisville, Ky., committed to the Jayhawks just after noon on Thursday through a video on his Twitter account.

Originally slated to announce his decision on Nov. 1, Muscadin adjusted his timeline because of his excitement over his choice.

“Man, it just felt right,” Muscadin (pronounced Jethro Mus-Ka-Den) told the Journal-World. “I’ve been thinking about it and I found out that’s where my heart wants to go and why wait.”

Muscadin told KU assistant Kurtis Townsend about his decision on Wednesday and called KU coach Bill Self Thursday morning to let him know.

Ranked by Rivals.com as the 131st overall prospect in the 2020 recruiting class, Muscadin is a player on the rise — he was not even ranked by Rivals until this fall — and is pegged by many recruiting analysts to have as much upside as most players in the class.

Some expect Muscadin to move into the Top 100 now that he has pledged his services to KU. Long, athletic and with a motor that matches his physical tools, Muscadin projects as a versatile big man at the Big 12 level who can play the 4 or the 5.

When asked how much room he had to improve still, Muscadin, who most often goes by “G,” described his game as, “barely coming in.”

“It was a great opportunity for me and opened up some other things so I took it,” Muscadin said. “But I loved my time at Sunrise and I got to know Kansas really well when I was there.”

That proximity to KU along with his recent official visit in late September cemented everything Muscadin needed to know about his top choice.

“I feel like it’s the right place for me to be,” he said of KU. “I loved everything, from the school to the tradition to the coaching staff. I have a great relationship with them.”

Muscadine becomes the second member of the Class of 2020 to commit to KU, joining juco guard Tyon Grant-Foster, who committed to KU earlier this week.

Like Grant-Foster, Muscadin said he discussed the looming NCAA allegations with the KU coaching staff and was comfortable with what they said about his future.

"They talked to me about it and I'm not worried at all," he said. "I love the school that’s where I want to be.” 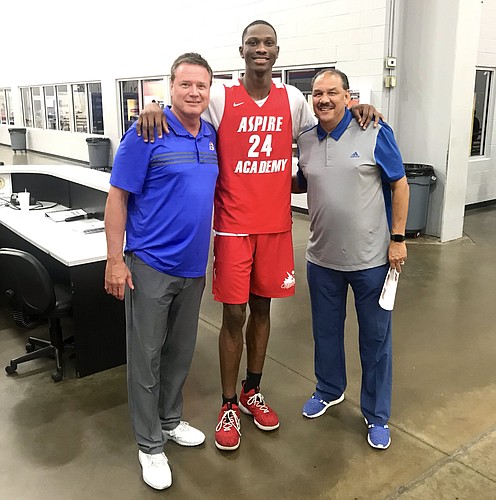 Gethro Muscadin during a recent visit with KU coaches Bill Self and Kurtis Townsend. Photo courtesy @aspireacademyky by Matt Tait

This is a good pick up...hopefully KU can lock up another commitment today with Todd...that would give KU a solid class early in the recruiting season..

This is a good pickup ! Agreed! I really like it when KU gets 4 star top 150 players that are not projected "One and Dones" and have no expectations to jump after the first year. Then they have plenty of time to learn the system, and if by chance they explode into an OAD in their first year then you gotta love it.

It's become obvious that too many OAD's have too many issues and if I were HCBS I would I focus on just one OAD per year and not worry about getting too much of a good thing.

Sweet Commit - - BUT Todd is NOT coming here - -Michigan Bound - -Hoping Javonte re-classifies and we can get his commit - get him - - KK - - Gethro - -& foster - - all things considered would be a good year. - - ROCK CHALK ALL DAY LONG BABY

Am I the only person who expected this kid to look more like Bryant 'Big Country' Reeves with a name like Gethro??? LOL. Is Muscadin the next Joel Embiid? Great pick up, keep 'em coming!!!

From Haiti? Oh boy. I wonder what issues will come up on academics, eligibility and guardianship.

Didn't have any issues with Embiid or Azibuike...no need to to think the DeSousa situation suddenly becomes a trend

Billy and Clif weren't from Haiti.

I like the fact that the coaching staff is not just targeting the 5 star one and dones. Logic tells me that those are the players whose decisions will be heavily impacted by the NCAA investigation. Players who are looking to develop over 3-4 years won’t be as worried about potential post season bans or a suspension of Self as a kid with a one year time horizon.

Seems like a solid, long-term type player. Maybe red shirt next year and focus on development and potentially have him here for 4-5 years. He might learn a lot from Mitch next year assuming he red shirts this year.

I don't believe he's here till the fall of next year, at which point we may/may not have Dok in the NBA (having used up his eligibility), DeSousa maybe playing pro as well as Mac, so there may be a need for him to play. Mitch might be the only big left, if he redshirts this year, but no, he won't red shirt "this year".

"He might learn a lot from Mitch next year assuming he red shirts this year."

He (Gethro) might learn a lot from Mitch next year assuming he (Mitch) red shirts this year. Obviously Gethro won't red shirt this year.

Eliott - The comparison to Embiid is accentuated by a comment in a 24/7 article that blocking shots is a strength. If he only started to play basketball at 15, then there should be so so much room for growth. We’re starting to develop quite the international big man trend. Love it.

your exactly right Dirk. - - The article I read said that and this is kind of crazy BUT the article said with him just because he signed with KU should put him in the top 100 recruits, that's cool but how does signing with KU cause him raise his stock 30 notches - -he becomes that much of a better player just by signing? - -that part I don't understand. - -However they also said that Gethro probably has the highest ceiling - -could make the biggest jump in rankings of anybody this year. So it's good to know that potentially anyways he has a very high ceiling. - -Good get - - -ROCK CHALK ALL DAY LONG BABY

it's good that everyone is being optimistic about our recruiting...but realistically? when have we been excited about juco players and players ranked closer to 200 than anything else.......we are not getting Todd today and don't really have a chance with many other top 50 players at this point......even this year our recruits were like 50 to 200......you can build solid programs with these type of players, but not conference champions and national contenders.....the truth is the ncaa investigation is kicking us in the !@@@ in recruiting and we are taking what we can get. I like to be optismistic, but we are not recruiting well right now......no matter how many time we say that every kid we get is a diamond in the rough and underrated.......

Texas tech nearly won a NC last season with a bunch of transfers and "diamonds in the rough"..their best player Culver was a 3 star player when he arrived in college...them the 2012 NC runner up team for KU..that team certainly wasn't loaded with OAD talent and high rated HS prospects..

Booooy, I'm excited. This kid reminds me of C-Diallo. Give him time, if he's trained properly, he'll become another Embiid. Seems like he should focus on strengthening his legs, though. Great pick, regardless! Welcome to the family, Gethro!

Here's a short (not professionally done) video of G in action. I like his two handed dunks (soft touch and very careful of his wrists around the rim)! He's not flashy. Also, his blocks stay in play. Again, not flashy but responsible play in that he gives his team at least a fifty-fifty chance of a takeaway instead of the ball going out of bounds back to the opposing team.

He will make a great addition to the Kansas team!