KU basketball notebook: Vitale has Kansas at No. 1, Dotson on watch list and a recruiting decision coming? 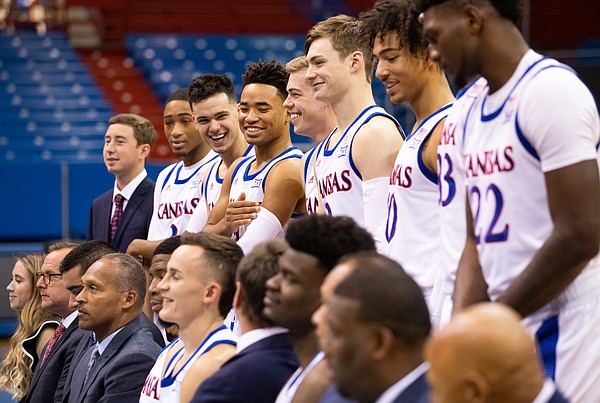 Members of the Kansas men's basketball team laugh as they prepare for the official team portrait during Media Day on Wednesday, Oct. 9, 2019 at Allen Fieldhouse. by Nick Krug

The No. 1 team in college basketball resides in Lawrence, according to longtime ESPN broadcaster Dick Vitale.

Vitale, who is set to begin his 41st season of calling college basketball games, on Monday released his Top 40 preseason rankings and had the Jayhawks on top.

“Bill Self has paid attention this offseason to an NCAA letter of allegations, and now Self is concentrating on competing for a second national title in Lawrence,” Vitale wrote next to KU’s position as his top team in the country entering the 2019-20 season. “Self was happy to have Udoka Azubuike return and if he stays healthy, watch out as the new rules should allow him more freedom in the paint. Devon Dotson will have more responsibility in the offense. It will be interesting to see how Silvio De Sousa contributes in his return.”

Self's Jayhawks consistently have been ranked in the top two or three by most national publications throughout the offseason and also have been the pick of many as the heavy favorite to win the Big 12 Conference.

Michigan State, Kentucky, Duke and Louisville rounded up Vitale’s preseason Top 5, and the Jayhawks could face two of those four programs in the first month of the season.

KU will open the regular season on Nov. 5 against Duke in the Champions Classic in New York. And KU and Michigan State are on opposite sides of the bracket in the Maui Invitation and could meet three weeks later if both reach the title game in Hawaii.

Kansas guard Devon Dotson has been named one of 20 watch list candidates to the 2020 Bob Cousy Point Guard of the Year Award, the Naismith Memorial Basketball Hall of Fame announced Monday.

This is the second straight year Dotson has been named to the award’s watch list, and he is looking to become the second Jayhawk to win the Cousy Award after Frank Mason III claimed the honor in 2017.

Dotson enters his second year as KU’s starting point guard on the heels of a strong freshman season that left him in the top 10 on several KU freshman lists. He was seventh in points (442), ninth in scoring average (12.3 ppg), tied for fifth in assists (127), seventh in steals (49), third in free throws made (115), eighth in free throw percentage (78.2), second in minutes played (1,168) and tied for second in games started (36).

Dotson is one of two Big 12 student-athletes on the 2020 Cousy Award watch list, along with Texas Tech’s Davide Moretti.

With a visit to Oklahoma on the schedule this weekend and the Nov. 13 signing period nearing, five-star prospect Bryce Thompson, of Booker T. Washington High in Tulsa, Okla., is closing in on a decision.

Thompson, who visited KU the weekend of Late Night, is down to a final seven that includes KU, OU, North Carolina, Oklahoma State, Arkansas, Texas and Michigan State.

He already has made official visits to KU, UNC, Texas and Oklahoma State this fall and plans to get serious about his choices next week.

“After the Oklahoma visit I will sit down with my family, we will go through the pros and cons of each school, see where I fit and see where I can contribute as a freshman and can win,” the 6-foot-4 shooting guard told 247sports.com at last weekend’s USA Basketball minicamp in Colorado Springs.

KU also is awaiting a final decision from fellow five-star prospect Isaiah Todd, who is down to Kansas and Michigan and is expected to announce his choice on Thursday, his 18th birthday.

Maan, I really hope we got commitment from Isaiah. We NEED this kind of player.

Small likelihood of that happening...

With all the Vitale bashing that goes on around in KU fan circles, i better not find anyone using this article to defend why we are going to be very good this year. Its already been established Vitale has no clue what he's talking about and is almost always wrong.

I love Dotson. He's a Frank Mason-type player, only better in his early years, and I'd love to see him stay all four years just to solidify his status as an all-time great Jayhawk. I know I'm dreaming, but a guy can wish, right?

If KU can land Todd, it will go a long way to showing other top recruits that they don't have to shy away from KU just because of the Adidas mess