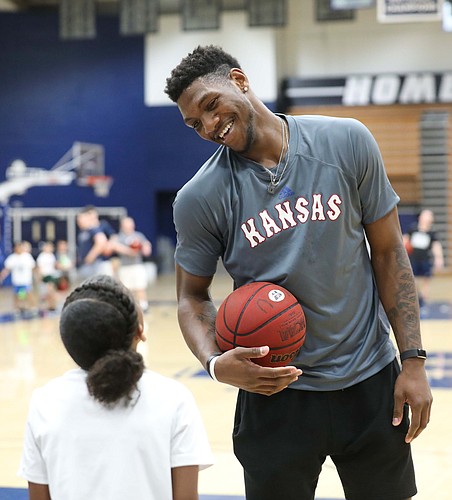 Kansas forward Silvio De Sousa (22) jokes with a camper during a Washburn University basketball camp on Tuesday, June 4, 2019 at Lee Arena in Topeka. by Nick Krug

You’ve been teased by his potential ever since the Final Four run of 2018 and watched him develop both as a player and a person even while he was sitting in street clothes.

Those two facts make the 2019-20 season for KU junior Silvio De Sousa one of the most anticipated in recent memory, as both De Sousa and the adoring Kansas fans are dying to see what the big man from Angola can do now that he’s eligible again.

In 20 games with Kansas during the 2017-18 season, De Sousa started slow and finished strong. There were moments during conference play toward the end of the regular season when KU coach Bill Self could not even put De Sousa on the floor for more than a minute or two.

But when center Udoka Azubuike went down with a knee injury just before the Big 12 tournament, something clicked, De Sousa started playing ball and his contributions were enormous for the Jayhawks the rest of the way.

If he gives that kind of production to this team, the coaches and his teammates surely will take it. But the belief among most people close to the program is that De Sousa has much more to give and that his stats will show it.

With that in mind, here’s a look at three things to watch with De Sousa this season.

With Udoka Azubuike and David McCormack both having the size and skills to challenge De Sousa for this title, it’s his drive and hunger that will set him apart.

Even as a young true freshman, De Sousa’s motor ran nonstop and it was obvious that he had great passion for the game and was hungry to improve his game.

That was particularly impressive given the fact that he was still fresh out of high school and had next to no time to get acclimated to the college game. Even with those limitations, De Sousa averaged 3.7 rebounds per game in 8.8 minutes. Expanding those numbers out over his a projected minutes-played number of 26.4 per game this season, De Sousa’s rebounds per game would jump all the way to 11.1.

If he comes anywhere close to that number, that should be plenty good enough to finish ahead of Azubuike (a career 6.4 rebounds per game player) and McCormack, who averaged 3.1 rebounds per game in 10.7 minutes played over 34 games a season ago.

Although he no doubt will still be a presence in the paint and on the glass, part of McCormack’s offseason was spent expanding his game toward the perimeter.

I think De Sousa will be this team’s best offensive rebounder and could get a quarter of his boards on the offensive glass this season.

He Won’t: Ever stop smiling

This one was too easy. If he hasn’t stopped smiling yet, there’s no way he’s going to stop now that he’s playing again.

I, like everyone else, have been so impressed with De Sousa’s demeanor throughout the past couple of years and I don’t think you can overstate how remarkable his attitude has been while his future was uncertain at best and in jeopardy at worst.

When I talked to De Sousa shortly before his suspension was reduced to one year by the NCAA in April, he credited his mother for his positive attitude. He said she always tried to teach her children to stay positive and look at the good in even the worst situations.

“I think it’s just a family thing,” De Sousa said at the time. “I was raised that way, and my mom always taught me and told me to be a good person no matter what, to care for others even when I’m not in a good position.”

De Sousa was not in a good position throughout the 2018-19 season, but you never would have known it by watching him. Whether on the bench, with his teammates, away from basketball or in front of the cameras, De Sousa stayed upbeat and showed the world a lot about his character.

He Might: Get the loudest single ovation in the history of Allen Fieldhouse

I’ve got De Sousa in my starting lineup for the 2019-20 Jayhawks, but whether he starts or not is more or less irrelevant.

If he’s in the starting lineup that night, the ovation could be endless and no doubt will rival some of the loudest we’ve heard in years. Even if he’s not, you know PA announcer Eric Danielson will make it a point to sit up a little straighter, talk a little clearer and project a little louder when announcing De Sousa’s move to check into the game.

The last KU-MU game at Allen Fieldhouse was ridiculously loud. K-State has drawn some loud nights, so have West Virginia, Kentucky and half a dozen others.

But when it comes to a single ovation for an individual player, I’m not sure we’ll ever have heard anything quite like this. We got a taste of it at Late Night, but game nights should be even louder.

Kansas fans love De Sousa. And he loves them just as much. Together they fought the NCAA’s two-year suspension — and won — and now they get to spend some time together, around 40 games if things go well.

Matt -- the loudest single ovation in the history of Allen Fieldhouse? I think you might not be old enough to remember Jacque Vaughn's return from injury in Allen Fieldhouse. It exploded that day. I remember.