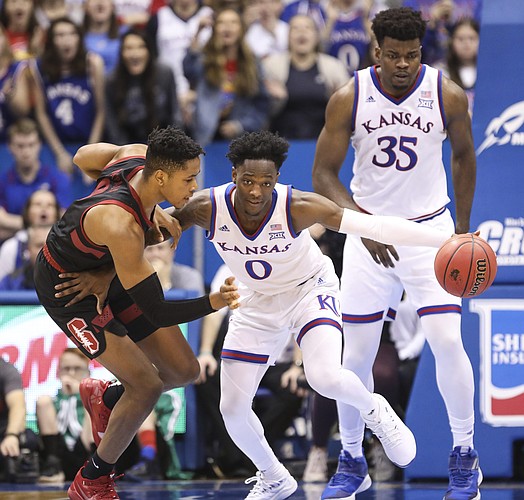 Down a guard after the sudden departure of freshman Issac McBride, Kansas basketball coach Bill Self recently said McBride’s departure did nothing to hurt KU’s depth in the backcourt.

According to Self, KU already had a more experienced option behind starting point guard Devon Dotson in place in junior Marcus Garrett.

“He wasn’t a point anyway,” Self said of McBride. “Marcus was probably going to be our backup point regardless.”

Listed by both Rivals.com and 247 Sports as a point guard out of Arkansas’ Baptist Prep, McBride came to KU known more as a scorer and shot maker than anything else.

And had he played for the Jayhawks this season, that’s exactly the role he likely would have had, Self said.

“I get such a kick out of this. (People say), 'Well he's a point guard because he's not very tall.' Or, 'He's a big guy because he's tall,’” explained Self. “Everybody's skill set is different and Mackey's skill set was one in which he was a scorer and not an initiator so much. So I wasn't really looking at him to be that anyway.”

With McBride now gone after citing KU no longer being a “good fit,” the Jayhawks will move forward with Garrett as the immediate backup to Dotson and plenty of capable scorers lining the rest of the roster.

“I think he's very excited about it,” Self said of Garrett and the opportunity to play a little more with the ball in his hands.

Primarily a point guard throughout his high school days, Garrett said last week that he actually missed playing the position since coming to Kansas.

During his time as a Jayhawk, Garrett has played more at the 4 position than the point, with a lack of depth to KU’s front court because of injuries and eligibility issues forcing him into action down low.

But Garrett said last Thursday, after the Jayhawks’ first official practice of the 2019-20 season that playing the 4 this season was no longer in the plans. It’s strictly 1 through 3 for the versatile junior from Dallas.

“I think so,” he said when asked if point guard duties would be a bigger part of his role this season than in the past. “I mean, if coach decides to move me there and have me play backup point guard.”

As for McBride’s future, the 6-foot, 180-pound scoring guard visited Arkansas over the weekend in search of a place to transfer.

Arkansas, like Kansas does now with McBride gone, has one scholarship left to hand out in the 2019 class.

There has been no word yet on whether the Jayhawks will look to fill the scholarship made available by McBride’s departure, but with a loaded roster and stability at the point, it seems likely that the Jayhawks will head into October with the idea of hanging on to it.

One interesting option could be Walker, who can play some point and has dabbled with the idea of reclassifying into the 2019 class and joining his chosen college team after the first semester.

My question would be......I wonder if Coach would say that about McBride if he were coaching in the NBA and McBride was available in the draft? Would he view McBride as a shooting guard or someone that has to play the point due to his size?

Congrats to Garrett, Probable 20-21 PG for the Jayhawks. When he was recruited all of the services labeled him as a PG and I can't wait to see him play the position. IMO, with his defense, if he can handle it, and can score a little & feed others, he has a chance at the next level as well.

Walker is a really good player, but he is a small forward. He has tremendous hang time, is a well above average shooter, a good leader and defender. He could work on his ball handling. I think he has 11 or 12 scholarship offers-all from really good programs. Memphis, Arizona, and Texas, to name a few! Of course Kansas and Arkansas have also offered! If he reclassified and enrolled with us at Semester, I’m sure he would Redshirt!

The 2020 point guard candidate is in Lawrence and on scholarship. Dejuan Harris from Columbia, MO. and MOKAN Elite. .Harris just might be the reason Isaac is moving on now. Dejuan was recruited by our coaches as a playmaker first, scorer second. He's currently planned for a redshirt this season, but that could change in an instant if necessary.

based on what others are saying he's a partial qualifier which would mean that he can't participate in team activities until the second semester and isn't eligible for games until next year (fall 2020).

I have not independently confirmed these as fact. But it sounds like he won't be eligible to play this season.

Also interesting: Isaiah Moss was set to attend Arkansas until the Kansas coaches convinced him to change his mind. If Mcbride ends up there it's almost like we traded the two.