KU coach Bill Self picks Garrett, Agbaji as Jayhawks most likely to step out of anonymity in Maui 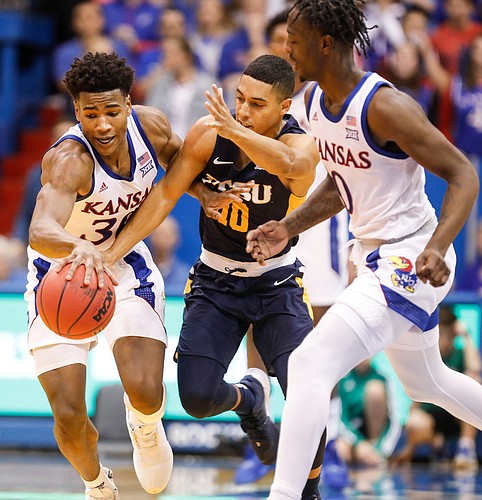 Kansas guard Ochai Agbaji (30) comes away with a ball from East Tennessee State guard Patrick Good (10) after it was poked loose by Kansas guard Marcus Garrett (0) during the second half on Tuesday, Nov. 19, 2019 at Allen Fieldhouse. by Nick Krug

During Sunday’s coaches press conference, bright and early above Ka’anapali Beach in Maui, Kansas coach Bill Self was asked by a couple of reporters to identify a player or two on his team that people might not know much about.

One of his answers made sense and the other seemed crazy.

Because it’s my job to cover and follow every detail of this team, and because so many Kansas fans do the same on a daily and annual basis, there probably wasn’t an answer Self could have given that would not have sounded strange.

But that’s because we’ve talked to, asked about and written about all of these guys — even the walk-ons — so many times in the past couple of years.

For fans of Dayton, Virginia Tech or the casual fan geeked about watching all 12 games of the Maui Invitational with the same excitement, Self’s answers might have actually been helpful.

First, the one that made sense.

“Our most underrated player is a guy named Marcus Garrett,” Self said. “He’s about a 6-5 guard that can do a little bit of everything. Really versatile.”

The Garrett answer makes a ton of sense. Heck, even though Garrett is one of this team’s most experienced veterans and has logged a ton of key minutes for Kansas during the past three years, he’s still a little under-appreciated among the fan base.

Not the team, mind you. Every one of those guys knows Garrett’s value and looks up to him tremendously. But because he’s not a lights-out shooter or a highlight-maker on a regular basis, several KU fans tend to celebrate other players more than the junior from Dallas.

But if there’s one player on this team who knows how to lead by example and grind through anything that comes his way, it’s Garrett. Having a good three games in Maui and landing on the all-tournament team would go a long way toward bringing Garrett some national recognition.

But I can guarantee you that the only thing that matters to Garrett is Kansas winning three games over here, even if he fails to score a single point and is voted worst starter in the tournament (which isn’t a real thing, by the way).

That’s just the way he’s wired and that’s why Self has been such a big fan of his from the minute he stepped on campus.

The other answer Self went with was another starter – sophomore guard Ochai Agbaji.

Agbaji, who has become a fan favorite and recognized on NBA mock drafts in the past 12 months, does not fall into the underrated category like Garrett.

But he might need a big tournament more than any player on this team. In KU’s first four games, Agbaji’s shooting sub-40% from the floor and just 25% from 3-point range and appear to be thinking way too much.

Self has said on multiple occasions in the past week that Agbaji just needs to let go and go play. He talked a lot recently about wanting him to compete with a free mind and there’s no doubt that coming over to Maui could do that for him.

Three games in three days. Grind through it however you have to. Survive and advance. Agbaji said it reminded him of AAU ball and he sounded genuinely excited about the opportunity. And for more than just being on the beach for a week.

The more I thought about this question and Self’s answers, the more I realized he couldn’t really go too many more directions with it.

Having said that, I thought for sure he was going to say Tristan Enaruna, but it might just be too early to heap that kind of praise on a true freshman. Remember, Self likes to push these guys by both building them up and humbling them at times and there’s no doubt that it’s still crazy early in Enaruna’s career.

Other than Enaruna, Christian Braun hasn’t been playing enough to be mentioned and the same goes for David McCormack in some respects, although for different reasons.

Silvio De Sousa got plenty of attention for his off-the-court battle with the NCAA and even the most casual college basketball fan probably has at least heard his name.

And then there’s Udoka Azubuike and Devon Dotson, preseason All-American and all-Big 12 picks who have had major roles at Kansas before this season. So saying either of their names would’ve been a reach.

Regardless of who Self picked, it should be interesting to see which Jayhawks best respond to the format, pace and style of three games in three days in Maui, starting tonight at 8 p.m. against Chaminade in Round 1.