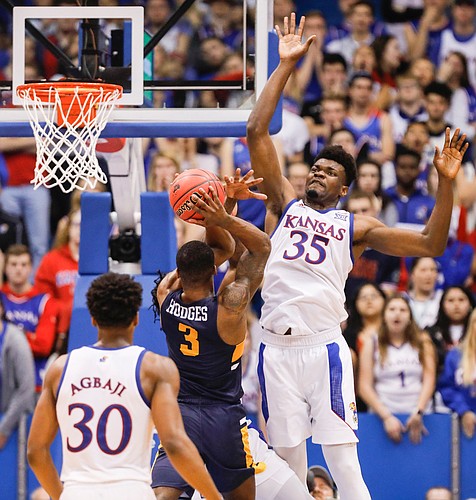 Kansas center Udoka Azubuike (35) elevates to stuff a shot by East Tennessee State guard Bo Hodges (3) during the second half on Tuesday, Nov. 19, 2019 at Allen Fieldhouse. by Nick Krug

1 – Udoka Azubuike – The big fella was fantastic in every way, imposing his will on the overmatched Buccaneers and finishing with 21 eye-popping points on 10-of-13 shooting. His blend of patience and power was a sight to behold.

2 – Devon Dotson – Started the game off with a bang, attacking the basket, being a pest on defense and helping Kansas deliver an early punch from which ETSU never fully recovered. Also hit 6 of 6 from the free throw line en route to a 19-point night.

3 – Tristan Enaruna – So smooth already and getting smoother by the game. His length, poise and all-around ability make him a serious weapon that can strike when opponents have their hands full with Dotson, Azubuike and the rest of the KU starting five. Tallied 4 points, 4 rebounds, 4 assists and 4 steals in 24 minutes.

4 – Marcus Garrett – Made 4 of 6 shots, dished three assists and swiped 3 steals. Would have made a push for the No. 3 spot if not for those 3 turnovers on his line.

5 – Silvio De Sousa – Bill Self said De Sousa contributed as much to KU winning down the stretch as anybody. That’s two pretty strong outings in a row for the KU forward who got off to a slow start to the season.

6 – David McCormack – Back in the starting lineup, McCormack played 12 minutes and scored four points and grabbed three rebounds. Not bad but nothing like we saw from him off the bench last Friday night.

7 – Ochai Agbaji – Another off shooting night has Agbaji 3 for 17 in his past two games. He played 34 minutes and he played hard. The shot’s just not falling right now. That’ll change soon enough.

9 – Christian Braun – Played eight minutes and had little to show for it. Remains a work in progress but is definitely capable and still worthy of real minutes.

33 pts from our bigs, that's more like it. Can you imagine if we hit even only 30% of our 3pts? We'll be averaging 90-100 pts each game if we can make buckets from both inside outside. Bigs got more touches when our team engages them effectively.

Enaruna is amazing. He's got it all. This kid plays high level basketball. His willingness to share creates opportunities for others. We've got him & Garrett that can glue this team and hold it stronger. I'm expecting our ATO improves as the season goes. We've been so bad keeping TO low in recent years. As long as we share more, we can at least keeping the ratio low, as well as enjoying more wins!

Well, Ochai, until you know how to handle ball like Kyrie, please don't hog the ball..!!

Definitely need better 3 point shooting from the team. Otherwise, the opponents will start packing the lane and forcing Kansas to beat them from the outside. I know that Self wants his back court players to drive the lane and force the action. But, there has to be an outlet player(s) hanging at the 3 point line (as well) to be ready for a 3 point shot attempt.

I thought that Isaiah Moss was going to be our three-point star.

His release wasn't in sync last night. He previously did one-motion 3pt, I thought he showed us he's not as consistent. Last night he seemed late releasing the ball after jumping.