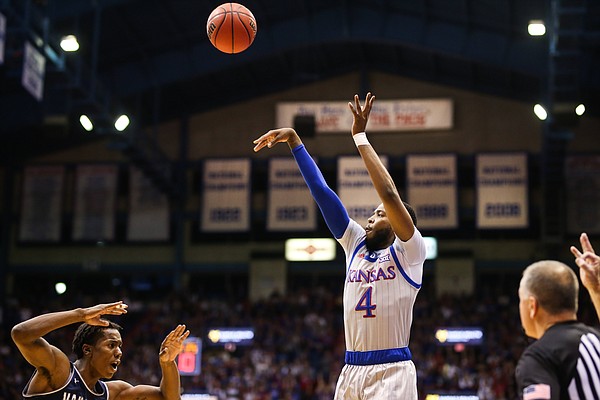 Kansas guard Isaiah Moss (4) puts up a three from the corner during the first half on Friday, Nov. 15, 2019 at Allen Fieldhouse. by Nick Krug

1 – Isaiah Moss – Looked a step closer to 100% and was absolutely lights out from 3-point range. Every shot looked so good when it left his hand and he finished with 21 points in 15 minutes on 5-of-6 shooting from 3-point range. You can see clearly what a weapon he can be for this team.

2 – David McCormack – Started this one on the bench and did not let that impact his effort. After playing just five minutes in the first half, McCormack was a man possessed in the second half, finishing the game with 17 points, 11 rebounds and 3 assists in 16 minutes.

3 – Devon Dotson – Wasn’t his best night from a shooting and efficiency standpoint, but he helped set the tone for the blowout with strong defense early and his relentless attacking of the rim.

4 – Udoka Azubuike – Played big, gave KU’s guards good targets and finished with 12 points and 8 rebounds in 23 minutes. Hit the front end of two trips to the free throw line, too.

5 – Marcus Garrett – Don’t look at the numbers here. Look at the way he played the game. After failing to look inside enough to please the coaches and the KU big men in the first two games, Garrett, more than anyone, made sure to get the ball inside whenever possible in this one. That helped KU dominate down low and opened things up on the outside, as well.

6 – Silvio De Sousa – Started and played 13 minutes in the first half but didn’t have much to show for it. That changed in the second half, however, when he scored eight straight points for Kansas to kick off the final 20 minutes. Still thinking a little too much at times, but he played a little freer in this one and got some quality stats as a result.

7 – Christian Braun – Hit a couple of 3-pointers and got more comfortable the longer he was on the floor. Easily his best game as a Jayhawk so far.

8 – Tristan Enaruna – It’s crazy when the guy who had hands down the offensive play of the night is ranked No. 8, but this is where Enaruna lands. Outside of his incredible windmill dunk — off of a McCormack outlet pass — and first-half alley-oop finish, Enaruna was relatively quiet. Still, that breakaway dunk was as big a highlight as KU has had so far this year.

9 – Ochai Agbaji – Wasn’t his night and Kansas didn’t need it to be. Agbaji finished 1-for-9 from the floor and made a couple of bad decisions with the ball to boot.

x = broke his ankle 20 seconds into the second game of the season and is expected to be out at least three monhts.

Four assists. Four missed lobs. From Dotson. Unbelievable. I'll keep commenting on his ability to pass, until I see some changes. This kid is a PG. A backbone of this team and yet, he can't throw a lob. 'Tae would've racked up 10-15 assists tonight. How do you make Dotson pass to bigs that lead to easy buckets? I don't agree with your ranking. Braun played with guts, he's smart, he's willing to pass and great pass inside to bigs. Garrett is fundamentally awesome. Enaruna played great both offensively & defensively.