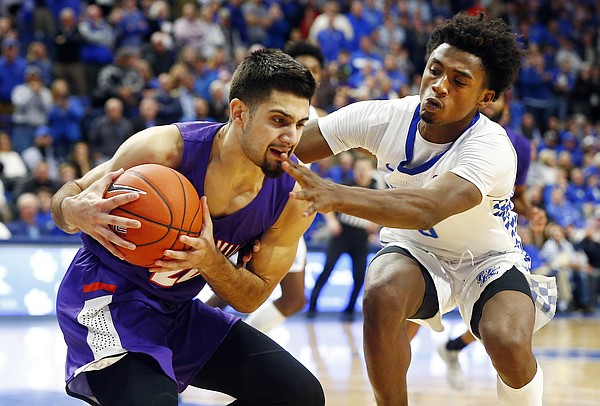 Any time Kentucky falls, a not-so-small section of the Kansas basketball fan base lets out a little cheer.

When that loss comes at the hands of someone who is tied to the KU program, that cheer gets a little louder.

That was exactly what happened on Tuesday night, when John Calipari’s newly-top-ranked Wildcats fell at home to unranked Evansville, 67-64, in a game the Purple Aces pretty much controlled from start to finish.

Former KU guard Sam Cunliffe, who sat out last season after transferring from KU following the 2017-18 season, played a rather significant role in helping Evansville pull off the upset.

In 29 minutes off the bench, Cunliffe scored 17 points and grabbed six rebounds to help lead the Aces to victory. He shot 6-of-13 from the floor, 2-of-6 from 3-point range and sank two clutch free throws in the final seconds to force the Wildcats to try to tie the game with a 3-pointer instead of having all options available.

After the game, Cunliffe talked with national college hoops analyst Jeff Goodman about the victory and had some kind words to say about Kansas and Bill Self, who sent Cunliffe a congratulatory text after the win.

“It was the first text I responded to,” Cunliffe told Goodman. “He was really hard on me. Seeing that text from him meant a lot to me. I wouldn’t have been able to do what I dd tonight without Kansas. Coach Self made me tougher.”

In two games with the Purple Aces (2-0), Cunliffe is averaging 17 points and five rebounds in 27 minutes per game off the bench.

After starting his career at Arizona State and transferring to KU after a semester, Cunliffe sat out the second semester of 2016-17 season and the first of the 2017-18 season before appearing in 15 games with the Jayhawks during their run to the Final Four in 2018.

Opportunity was always the issue for Cunliffe. At least at Kansas. And now that he’s in his first year of competition at Evansville after redshirting the 2018-19 season, the redshirt junior from Seattle appears to have found a place that is willing to give him consistent minutes.

That's just great in so many ways! Way to go Sam!

Yeah! It is good when UK goes down. Great to hear that Sam is doing well also and that he is understanding and appreciating what Coach did for him (and all his players).

Good for Sam. Could've used him in our team in many ways. I always thought he would be a great contributor. He looks really good in that match.

His inability to play defense is what hurt him the most at KU.

He was always a valuable offensive weapon.

I assume that he's going to graduate this year, and with one year eligibility remaining, he could come back! ;)

Great job Sam. He had ice in his veins while hitting those two free throws with 6 seceonds left.

Sam's comments about Self confirmed a trait that is such a part of our basketball coach's greatness. We should know by now to believe and trust in Bill Self.

Great to see that Sam Cunliffe is experiencing positive experiences in his Collegiate basketball career. It's sad that it didn't work out for him in Lawrence, Kansas. But, truly glad to see that he's found a home in Evansville with the Purple Aces. Walter McCarty was probably on cloud 9 last night.

He looked good last night. I had forget where he transferred, but when I heard his name, I paid closer attention. Good for him - very nice young man. We had a chance to meet with him during the Italy trip and was sorry when he left. He clearly has some raw athletic abilities, and it appears his basketball skills are greatly improved. I was not very impressed with KU, Duke, UK, or MSU in NY, so all might be vulnerable early.

Way to go Sam! I love this!

I always liked Cunliffe. Never could figure out why he ended up in Self’s doghouse. Happy about his success and getting that special text from his old coach.