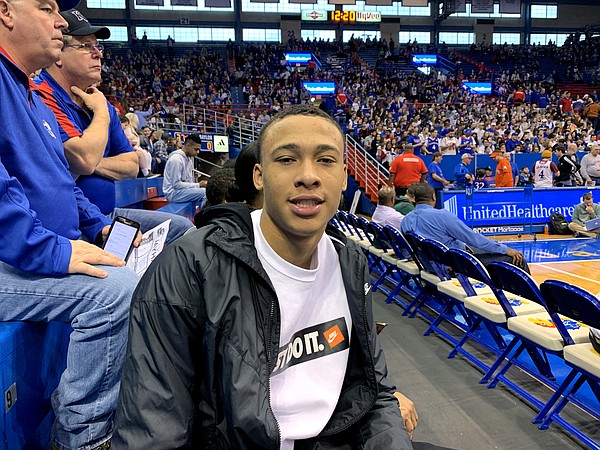 A decision from reclassified combo guard R.J. Hampton may still be several weeks away, but one of the top recruiting analysts in the country is ready to call it for Kansas.

On Monday afternoon, at exactly 3:42 p.m., Evan Daniels, of 247 Sports, logged his “crystal ball” pick in Hampton’s recruitment for the Jayhawks.

When asked by 247 Sports national writer Kevin Flaherty why he punched the pick in this week, Daniels said simply, “It just seems like a good fit. Right now, my gut would be Kansas for R.J. Hampton.”

Though entertaining to track, these crystal ball picks certainly do not mean anything is a done deal, though they often have been a good predictor and indicator of which program any given recruit might pick.

In the case of Hampton, the Class of 2020 5-star prospect who last week reclassified into the 2019 class, Bill Self and the Jayhawks are currently in a four-horse race for the 6-foot-5 guard from Little Elm, Texas.

Memphis, Kentucky and Texas Tech are the other three programs on Hampton’s list of finalists, and Self and his coaching staff have made Hampton a serious priority during the past couple of weeks.

Typically done recruiting the current class by this time of year, Kansas is still searching for 2019 prospects because of the departures that came following their second-round loss to Auburn in the NCAA Tournament in late March.

Any of those four could still pull their names out of the drat pool and return to KU if they do so by May 29, but the expectation is that KU will have to fill at least four, and possibly five or six, spots to fill out the 2019-20 roster.

With a returning core of Udoka Azubuike, Marcus Garrett, Ochai Agbaji and possibly Dotson, Daniels believes Hampton would be a prime addition for Kansas.

“I think he fits perfectly,” Daniels told Flaherty. “R.J. Is a true combination guard, who can (play with the) ball in his hands or play off the ball. And he’s at his best playing next to a ball-handling guard.”

During a recent interview with the Journal-World, Rivals.com recruiting analyst Kristen Peek, who just spent time with Hampton at the Nike EYBL event in Atlanta, called Hampton “the complete package.”

“He’s long, quick in the lane, a great passer and can hit the 3,” Peek said. “Plus, he’s also a big time presence on the defensive end, as well. There’s a reason why both LeBron James and Dwyane Wade stopped by to watch his game during the first EYBL live period.”

On Monday, 247 Sports released its updated rankings for the 2019 class and Hampton landed in the No. 5 overall spot as the top remaining uncommitted player available.

KU signees Christian Braun and Issac McBride were ranked No. 133 and No. 150 overall, both way up from their previous spot in the rankings.

would be a great pickup for KU to land him..maybe him coming would cause a domino effect for other unsigned top 100 kids to sign with the Hawks

come on down R J!

What does “the gut” predict about Grimes, Dotson & De Sousa?

Gone (regardless of whether he's drafted or not), coming back, penalty reduced so he can play all of next year or half of next year (the second option may bring a question as to whether he'll stick around for half a season or bolt overseas).

Grimes is Gone - -- Devon will be back - - an DeSousa - is still just a wait and see I think. - -heard there is some rumblings - -so things might be coming to a hear one way or another

RJ will want a guaranteed 30 min playtime at KU. He won't come, otherwise. I don't think he's a dominant player, but heck, at this point, any top recruit will look good on KU's recruitment ailing record.

Out of curiosity, what makes you think he's not a dominant player?

Based on my observation. We'll see later. I never claim an expert analyst, so he might prove me wrong.

Steve, a quick question. Did you think Josh was a dominant player? How do you think R.J. stacks up with Josh?

JJ is a beast. He's more physical, stronger, great rebounding skill - much much more dominant than RJ. Sorry to disappoint you all. I love JJ - he's one of KU's greatest recruits. Let's talk again next season.

I don't really know what Steve is thinking - -RJ very much a dominant player -- Total package -he can break your ankle with his change of direction - -outside J much improved -- good defense and can flat take over a game - - great vision - got it al. - -Also he will get his 30 minutes if needed - chances are - -Devon will be running the point and RJ will be manning the 2 -already said he can play off the ball along side other talent - it's ok - -we got this - - we are now at 60% in his CB compared to 20 % for Memphis - -we have came a long ways. -- -ROCK CHALK ALL DAY LONG BABY

Love to have him. Has anyone heard anything about Tristan Enaruna?

People saying looks like he is gonna end up in Omaha

And he commits to KU less than an hour after you say that...

I thought the decision on DeSousa was being fast tracked? It's been over 8 working days now

The NCAA only moves fast when the screw people or schools. When it's something that could benefit a player/school they move like pond water.