One day back, KU point guard Devon Dotson appears to be contemplating a number change 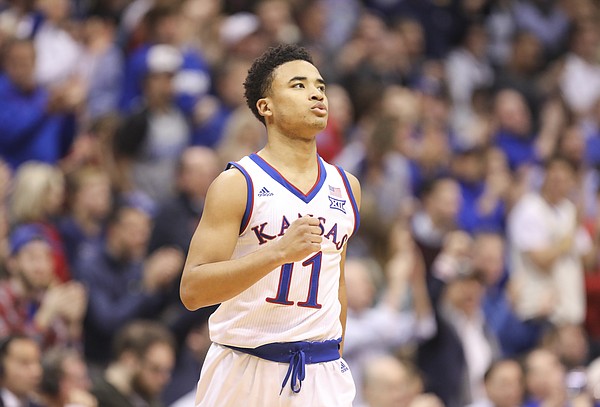 Kansas guard Devon Dotson (11) pumps his fist during a Jayhawk run in the second half, Wednesday, Jan. 2, 2019 at Allen Fieldhouse. by Nick Krug

As if Kansas point guard Devon Dotson has not had enough to think about during the past few weeks, now the sophomore-to-be appears to be contemplating a number change.

A day after announcing his decision to return to KU for Year 2 instead of opting for the uncertainty of the NBA Draft, Dotson took to Twitter and posted a poll that simply had two numbers listed — #1 and #11.

Dotson, of course, wore No. 11 as a freshman and did fairly well with it, earning all-freshman honors in the Big 12 and leading the Jayhawks in assists and steals while finishing as the team’s second-leading scorer.

So it’s not as if the number was unkind.

But, according to Dotson’s mother, the Charlotte native has worn No. 1 his entire life and now that the single digit is available again with the departure of former KU forward Dedric Lawson, Dotson easily could scoop up his old jersey number during the offseason if he so desired.

The poll was only up for a few hours and appears to have been removed from his Twitter feed. At last look, there were more than 4,000 votes and 60% of those were in favor of Dotson keeping No. 11.

Count me in that camp. After all, there aren’t too many more quintessential Kansas basketball point guard numbers than 11, which, over the years, has been worn by KU greats Jacque Vaughn, Aaron Miles and Mark Turgeon. Recent KU star Josh Jackson also wore No. 11, albeit while playing every position but point guard.

Changing numbers midway through a career is certainly nothing new at Kansas. Several players have done it and coaches always seem to be willing to accommodate the request as long as the number is available.

Of all the responses posted to Dotson’s poll on Thursday, including one from his mother, the one that drew the most interest among KU fans came from Class of 2020 point guard and KU target Kyree Walker, who has been rumored to be considering reclassifying into the 2019 class and who told Dotson he should keep No. 11.

Naturally, several KU fans immediately made the leap between that comment and Walker’s desire to wear No. 1 for the Jayhawks.

But a lot has to happen before that’s possible, starting with him reclassifying and then with him picking Kansas in his recruitment.

The way this offseason has gone, never say never about anything. But for now, it seems like concentrating on Dotson’s decision on the digits and not Walker’s on his future is the safer, smarter, less-stressful path for fans of Kansas basketball.

How many times can I vote??? 😂 You have been #1 your whole career (D Rose Fan) #11 was temporary and no championships with that number.

None by Angie Dotson

Mrs. Dotson is correct but I was hoping Devon would make history with number 11! Now, that would be something wouldn't it? Number 11 could be retired! He'd be a god forever in Kansas History like Wilt, Paul and the rest of the greats lucky to have worn the Kansas jersey and play in the Cathedral of Basketball

No offense to anyone, but over 2,500 people actually cared what number Devon will wear next season??!! I find that so amazing on so many levels, I'm speechless. I guess just color "me out of touch" with the present day's version of reality. :}

However, you did click on the article that was specifically asking that very question, and furthermore you posted on it.

Well for me what others think or wish is understandable. But I believe Dotson has the right to pick available number he desires. Changes in numbers is not uncommon. He probably would have picked one last year if it was available.