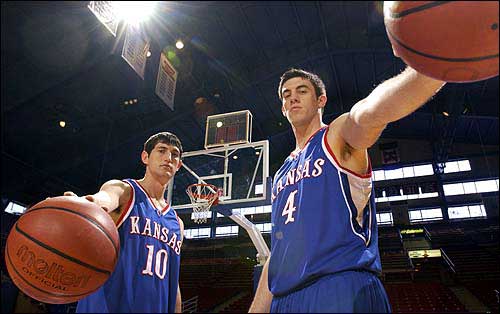 Former Kansas basketball players Kirk Hinrich, left, and Nick Collison were a part of the 2002 Final Four team that went 33-4 overall and 16-0 in Big 12 play. by Scott McClurg

Those two moves — along with others like them throughout the years — got me thinking.

Which former Jayhawks might be in line to someday follow in Stackhouse and Howard’s shoes and take over a college program, whether that’s KU or somewhere else?

Obviously there are a dozen or so former KU players who actually are coaching in the college ranks today, so let’s get rid of them from this list. No Manning. No Turgeon. No Walters or Haase. No Ballard or Boschee. No Tad Boyle, C.B. McGrath, Brennan Bechard, Jeremy Case, Brad Witherspoon, Brady Morningstar.

We’re talking names that could come out of nowhere to surprise you. And there are several that immediately come to mind.

First, for full disclosure, it’s not as if Stackhouse and Howard are walking into coaching out of nowhere. In 2015, Stackhouse was hired by the Toronto Raptors as an assistant coach and he later became the head coach of Toronto’s G League franchise for two seasons. This past season, he was back on an NBA bench as an assistant with the Memphis Grizzlies.

Howard, too, has spent the past several years on an NBA bench, following up his 19-year, 8-team playing career with a six-year stint as an assistant coach with the Miami Heat.

Whether their move to college coaching works out or not, these guys have experience on the sideline and with running a program and there’s little doubt that they know basketball as well.

Both were absolute stars in college and enjoyed big time success in the NBA, as well.

So, back to the original question.

Which former Jayhawks not on that list above fit that last line of having been stars in college before going on to NBA success, as well?

All three bring some level of intrigue to the coaching equation, but Pierce seems to be headed toward a career in front of the camera as an NBA analyst so we’ll eliminate him.

Hinrich and Collison — there they go being mentioned as a duo again — are both spectacular options who have remained around basketball and worked in coaching capacities already.

Hinrich, who enjoyed a strong career with the Chicago Bulls has worked numerous camps and grew up the son of a coach.

Collison, who only recently retired from the Oklahoma City Thunder, spent his past few NBA seasons as a sort of bench player coach in OKC.

There’s little doubt that both former Jayhawks, should they so desire, could quickly find themselves on the path to becoming a head coach someday. The road to holding that job at KU is a bit longer and may never fully present itself. But those two are at the top of my list for potential former KU players not currently in coaching who could make the jump.

Others on the list include Landen Lucas, Sherron Collins, Mario Chalmers, Russell Robinson and Devonte’ Graham.

Watch out for Miles in that group. The guy could be a coaching star someday.

I really think this story should focus more on former college stars who experienced success in the NBA coming back to be college coaches. That's the real trend emerging. Danny Manning, Penny Hardaway, Jerry Stackhouse, Juwan Howard, Avery Johnson, to a lesser extent. The draw of players who made millions in the league coming back as coaches. The recruits seem to flock to that now more than ever. Sorry, folks like Lucas, Collins, Robinson, Miles and Lee are a dime a dozen as NCAA coaches now. Basically anyone who played for KU could become a coach one day, why not mention them all. It will be interesting to see when Self finally retires if hiring former college stars who became NBA stars will still be the trend. Maybe KU hires Kirk Hinrich, Nick Collison, or Paul Pierce. It will certainly be interesting to see if this trend continues long-term and which former NBA stars become head coaches next.

I thought the article was more about which former KU players might become head coaches at the Div 1 level someday rather than which superstars would become coaches.

Recently retired NBA star players should have enough money not to need the headache of college coaching. If they really crave the job is it for the challenge or the attention? There's the clue why most fail.

There's a long history in all sports of most superstars turning out to be lousy couches, because a lot of them have a difficult time imparting to others what they themselves have been able to do. It will be interesting to see if this trend follows along those lines or manages to change the history.

I was thinking along the same lines wondering if there have been elite players that have had successful NCAA coaching careers. Avery was the latest attempt, but flamed out. Penny is collecting quite a class of characters, but it will be interesting to see if it can translate into NCAA success.

I think I can safely say that both Heinrich and Nick Collison would start on next year's team.

Kirk and Nick would, but Heinrich wouldn't.

It would be interesting to see this couple coaches' sons/elite players come back as a pair.

What Kirk are you referring to, if it's not Kirk Hinrich?