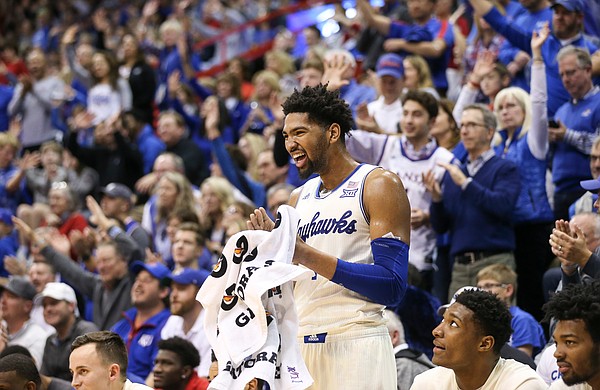 Former Kansas guard Lagerald Vick was in Charlotte, N.C., on Wednesday, participating in a pre-draft workout with the NBA’s Charlotte Hornets.

And we’ll keep the series going with a look at the Jayhawk most likely to get drafted, junior forward Dedric Lawson.

According to the scout, Lawson’s current draft range sits in the 35-50 range. That’s solidly in the second round, with a chance to go in the first five or so picks of Round 2.

A good showing at the combine, or during individual workouts with NBA teams, could boost Lawson’s stock, but, according to the scout, it would take a pretty monster effort to move him into the first round.

When asked about Lawson’s weaknesses, the scout broke down his analysis into offense and defense.

The way the scout sees it, there are plenty of things to like about Lawson’s game.

• Possesses great skill and has all the footwork necessary to get off any shot he wants in the paint. The scout dubbed Lawson a “slightly above average” finisher around the basket.

• His confidence in his jumper out to the college 3-pointer is improving and his stroke looks good.

• Gets to the free throw line and knocks them down.

• Can put it on the floor with ease and is a really skilled passer in and out of the post.

• Has a good feel for the game and how to defend.

• Walls up well and can stay out of foul trouble.

• Solid on the glass because he boxes out and pursues each miss.

Now let’s move to the areas that drop Lawson into that 35-50 range.

• Lawson figures to test as one of the worst overall athletes in the draft.

• Lawson lacks speed and blow-by ability, even when guarded by bigs.

• Lawson can get going too fast and miss shots in close. “He needs to slow down.”

• Lack of athleticism makes it hard for him to stay in front of offensive players laterally.

• Needs to continue to work on his overall strength so he can handle the battles that go on in the interior.

This time of year brings back fond memories.

All of these opinions from scouts etc are just ... opinion....

Remember how Joe masterfully projected Perry Ellis as the next Harrison Barnes based on this amazing form of analysis...

Using this proven method Dedric can reliably be forecast to be drafted and perform similarly to Larry Bird, Kevin Durant or Zdeno Chara. Take your pick.

Where has Joe been lately?

Jay, my thoughts as well..I haven't seen a Joeism in weeks. It's just not the same without a Brett, Jay, Joe and Suzi firing salvos at each other over an article.

P.S. I'm pretty sure Suzi is smarter than all the rest of us put together. She must be one patient gal to put up with us!!!

Regarding the article, since the NBA no longer plays basketball but rather some combination of professional wrestling and rugby, I fear Dedric chances are somewhat diminished.

That's funny Tony...thanks. I still follow KU Bball as closely as ever but honestly, the team we had this past season left me relatively flat. Then the whole Silvio/NCAA thing made me sick to my stomach. I love KU Basketball but absolutely despise anything to do with the NCAA. I think, back it up with case law and their selective punitive administrating, they are a criminal organization. How can anyone in the USA support any organization that denies a person the right to their own person. If the NCAA can fix themselves, I'll be on here as much as anyone.

Then spell his name correctly.

When he returns, I will spell his name correctly.

Where did Keegan go? I didn't know he left.

I'm willing to be corrected by Suzi but I doubt that I've ever "fired a salvo" at her.

My MO is to mock nonsense. Suzi posts nothing of the kind. Joe and BM post almost exclusively nonsense.

Jay, you are right...My apologies..a literary generalization for effect but not grounded in fact. Luckily there is none of that in the world today. [My sarcasm font must exploded!!!]

Matt...seems to me Dedric [1]can work his butt off for this draft, [2] return to KU and work his butt off for next years draft or, [3] play overseas as his career. Regardless of his options, he is not going to become NBA first round athletic, EVER! Did this scout feel he has sufficient game to be productive now, or at some point, as a 10 to 15 minutes per game backup. I hope that's his forte and he'll still become a millionaire.

I still think Suzi is the reincarnation of Jaybate . . .

To Allan's point, I'd like to hear what this scout's projection of Dedric would be as a NBA player as a career. Can he stick for a number of years?

I, for one, totally appreciate Dedric for what he brought this year. I hope he finds a way to kill it in the NBA and make a ton of $$$$$.

I understand the reasons for both comments, but does anyone else find it humorous that he lacks speed yet needs to slow down?

People who have played sports at a competitive level understand this completely.

It's one think to have the physical gift of speed. It's another to have the mental gift that allows a player to slow the game down and make the right decisions. The mental gift doesn't even necessarily transfer from sport to sport.

No. Famous John Wooden statement is play fast but do not hurry.

Matt/staff, can you share some insights on transfer candidates who are considering KU? Tons of them listed at the transfer portal: https://247sports.com/Season/2019-Bas... but can't really tell much who's interested in which school. I wonder who the staff is interested in, too.

Come back and work on your 3 point shot. It’s his only option and choice. Did anything about him last year scream NBA? He rebounds well that’s going for him. This isn’t hard to see that it’s a mistake to leave and end his career. I don’t hate Dedric, I am fed up with college kids getting bad advice or no coach or parent stepping in say “uh, your not good enough yet” This includes Bill Self not being blunt with his players about the NBA.

NBA is a make-miss 3-point league, which means that for Lawson he must demonstrate the ability to generate and knock down 3's, while being able to defend the 3. Lawson does not have the size, strength and athleticism to defend the rim, or be a factor around the rim defensively or offensively at the NBA level. I hope Lawson's 3-point shooting and ability to generate his own 3-point shot really impresses at the combine, because that will be his ticket to NBA interest at least.

Dedric compares favorably to the Morris twins in college, and they have had decent NBA careers. They don't jump out as super athletic, but probably more athletic than Dedric.

Lawson shouldn't leave he's not that good and has not guaranteed contract. We will see him in Europe within two years.

I agree he should stay.....but keep in mind he can also make millions in Europe. Maybe not quite as much as the NBA......but still very lucrative.

Let's see......making a ton of money playing ball on a team in Europe while having all kinds of new experiences versus making no money playing on a team that might go on probation???

I think I answered my own question.

probation? i thought we good, are we not?

I think KU will be fine. The NCAA may want to impose a penalty-but has zero interest in putting a team like Kansas on probation........ Bandle usually has good posts but seems to get a bit pessimistic at times.

I think they might have had interest in putting KU on probation but KU didn't give them nearly as many reasons ($10K/month) that Arizona apparently has given the FBI and the NCAA for putting UA on probation. That might lessen the pressure on KU.

There are advantages to staying. And it would only be a year so not like it's a permanent decision. Besides he has many years to play pro somewhere.....just one more at KU.

I like Dedric a lot more than most of the above. I think he's getting criticism, mainly because he had to play Center this year at KU. Had he been able to play Power Forward, his natural position, I certainly believe he would be rated much higher.

I am selfishly rooting for him to not be drafted. I think he'd still be able to return to KU - he's smart enough not to make his position permanent until he sees how (if) he's drafted. I just am confident both he and KU will do much better if he returns for his senior year.

"Solid on the glass because he boxes out and pursues each miss."

If that's what it takes, every KU player should be solid on the glass.