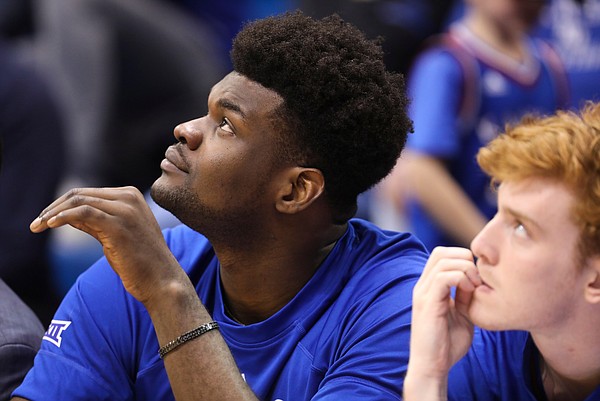 Norman, Okla. — The streak is over and as the rest of the Big 12 Conference no doubt was doing a happy dance at the expense of 14-time defending champion Kansas following Tuesday’s loss at Oklahoma, one man’s name came up that had not been mentioned in a while.

It was that of Kansas junior Udoka Azubuike.

After a 30-minute meeting with his team in the locker room following the Jayhawks’ 81-68 loss to the Sooners on Tuesday night in Norman, Okla., Kansas coach Bill Self was asked by a member of the Oklahoma media, in big, broad, general terms, if he thought things would be different had the Jayhawks still had the 7-foot Azubuike in the lineup.

In many ways, the question could have been rhetorical. Of course things would have been different. Azubuike and his mammoth size and record-breaking field goal percentage provide Kansas with arguably the toughest individual matchup in college basketball.

And with all due respect to what Kansas State and Texas Tech — along with the six Big 12 teams that refused to let KU come to their place and win — have accomplished this season, there’s little doubt that KU would have been a different team and, therefore, perhaps in a much better position to extend its streak of 14 consecutive Big 12 regular season titles to 15 right about now if it had Azubuike in the lineup night in and night out.

Instead, though, Azubuike played in just one Big 12 game this season — coincidentally, it came in the opener against the very Oklahoma team that played the final note in KU’s Big 12 swan song — and the Jayhawks have been trying to figure out how to operate without him ever since.

There were good moments — like rocking Texas Tech and K-State at home or fighting to survive an overtime scare from TCU in Fort Worth, Texas — and bad moments — pretty much all of the road losses, but especially no-show nights at OU and Texas Tech — but not one time did Self or his team ever talk about not having Azubuike as the reason why any of it was happening.

That’s what made the question on Tuesday night so interesting. But even then, Self did not take the bait.

“We had a pretty good team when we had our full complement of guys,” Self admitted. “But I tell our guys all the time that injuries are a part of what many teams go through throughout a season and everybody deals with some adversity or obstacles and the good teams are able to fight through that.

“Basketball’s a little different than some other sports, where one person can make such a big difference,” he continued. “But the reality of it is, I don’t look at that as an excuse. I know that we would certainly be better with our full complement of players, but you could say that about a lot of teams across the country. Bottom line is we just haven’t got it done in the manner in which we hoped we could.”

One of the biggest reasons Self refused to use the Azubuike injury as an excuse for what transpired this season — or the fact that the team played the parts of the past couple of months without four players who were key parts of the 2018 Final Four team in Azubuike, Lagerald Vick (leave of absence), Silvio De Sousa (NCAA suspension) and Marcus Garrett (ankle injury) — was because of what this young Kansas team has proven it can do without them.

None of that foursome was there, back on Feb. 2, when KU rocked Texas Tech by 16 points in what was arguably the team’s best win of the season. And only one of them was in uniform (Garrett) when KU whipped K-State at home last week in a do-or-die game that kept the Jayhawks in the Big 12 race until the end.

“I think we’ve shown teams that, when we play right and play well, we’re turned up enough that we can play with anybody,” Self explained. “So to say losing a player is the reason why something happened, I’m not going to buy into that because we’ve shown that we can play at a pretty high level. We just haven’t done it consistently enough.”

That consistency, or lack thereof, was perhaps the biggest reason the Jayhawks found themselves in the position they were in on Tuesday night, watching the Sooners celebrate a big win and knowing the rest of the Big 12 was celebrating right along with them.

And, Azubuike or no Azubuike, injuries or no injuries, tough breaks or no tough breaks, Self was not about to call what this team accomplished and tried to keep alive for the past few months was anything other than an effort worthy of his admiration.

“You know, I haven’t talked of the streak to the team very much,” Self said. “But it’s pretty cool, at least from our perspective, that we’ve hung in there for a pretty substantial amount of time and taken most people’s best shot most every night and we’ve had teams that were tough enough to be able to combat that and talented enough to because you can’t do it without talent.”

“We’ve certainly had our fair share of talent. And we have talent now. It’s just young talent. A coach, better than anybody, knows the potential and the ceiling for each and every team and for us to be 22-8 right now, even though we’ve had some pretty bad losses on the road, I don’t think is anything for this team to hang their head on considering some of the stuff they’ve had to go through.”

It will be so interesting to see how we play against Baylor. Will we play with pride and purpose and be pissed, or will the young flowers simply wilt, and go quietly into the conference tournament night, and quite possibly a first round tournament loss, or will the sacred monkey off their back, they decide to double down and play like a team, and a very determined one.

I must say I am not overly optimistic. It happens at work and in life that you sometime get the wrong group of people together. Did we have injuries and bad luck, you bet. But this group has not matured at a fast enough pace. They still act very much like freshman.

So wait to see if it's wait till next year, or we've just begun to fight.

Personally I'm not too concerned or upset about the streak. Sure it sucks, but it obviously couldn't go on forever. We got the record and that's great. I'm actually looking forward to a season where the narrative isn't constantly about the Big 12 title. Let's work on getting better and peaking in March.

This team obviously isn't peaking in March and they don't look like they have the potential to do so. It will likely be a 2nd round exit in the NCAA tournament. Could turn out to be a forgetful season all the way around, but that doesn't mean I'm any less excited about what next year could bring.

It's not really anyone's fault this season, we just didn't have that leadership we have had in the past. It was obvious that without a Graham or Mason type leader on this years team we didn't respond to being punched in the mouth well. Dotson tried, but he hasn't been through the battles yet. Lawson doesn't have the demeanor to lead like that. He let's his play do his talking. I don't think anyone else felt like they were in a place to be that guy. Dotson will learn from this year and become our leader for next season and beyond depending on how long he sticks around. Still not a bad season, just not up to KU standards.

There is no intuitive team chemistry. They do not trust each other and there is no team leadership. Just a collection of outstanding talent that will become dominate in the next two years if they stick together. Wonder if Doke will pull an Embiid and never play again for KU. Wonder if legal trouble at KU is keeping the kid from Rochester Minnesota from signing with KU. Don't expect KU to make it beyond the first weekend in the NCAA. Next year (if Self stays).

Yes no chemistry and because Dedric gets doubled and tripled, Devon forces the issue to get anything out of our offense. Problem is Grimes was back to his old self and Ochai is not hitting.

Sad to see the streak end, but need to have some perspective on this. As a fan, I've been on the other side of streaks and once they are broken, it's an incredible feeling.

Most recently, the gophers football team beat the badgers to end Wisconsin's 14 game winning streak against them. People were over the moon about that, and rightfully so. But no one's making the mistake of confusing Minnesota's football program with Wisconsin.

Kansas will be back and if they can get Matthew Hurt next year, probably a top 5 team again.

The boys in red and blue will start a new streak. #Faith. ROCK CHALK.

It took four decades for someone to break UCLA's record streak. I imagine it will take someone a lot longer to break ours.

Let's continues the other streaks: 1. We are only 23 weeks away from UCLA's record for being in the top 25. Should break that next year.

Hope we don't fall out of the top 25this season, might be a possibility.

I try to think what if coach K or coach Cal lead this same young team would we see different outcomes? I don't believe so.

For all the talk about KU not going far in the tournament, keep in mind that we've all seen plenty of teams over the years that had mediocre regular seasons and got hot in the tournament. I'm not saying that that will happen, just that you can't really make a definitive statement that this team will do this or that in the tournament.

Also keep in mind that KU's record as a 1 seed hasn't been great over the years, so sometimes it's not the worst thing to be the hunter rather than the hunted.

Given all of that, I don't think this team will go far; I just think you can't make a blanket statement about it.

I don't think this team is going anywhere in the NCAA. They will have to play on the road and they just have not shown me anything this year as far as toughness. They might win one and then done.

The fact that no senior will speak on Saturday lets you know all you need to know about the season. Just wasn't anyone to guide the team thru all the downs this year. Shouldn't expect 4 freshmen to lead. Give me the 3 or 4 year PG. Not a knock on Dotson because he's going to be one of the best.