Breaking down what's left in the Big 12 race for KU, K-State and Texas Tech 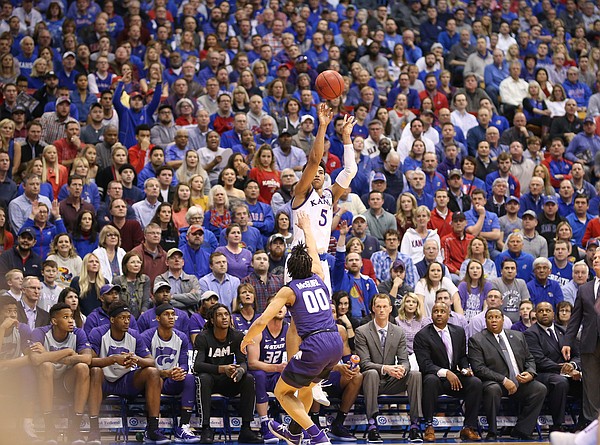 Kansas guard Quentin Grimes (5) puts up a three from the corner over Kansas State guard Mike McGuirl (0) during the first half, Monday, Feb. 25, 2019 at Allen Fieldhouse. by Nick Krug

A big Saturday in the Big 12 Conference has come and gone and the only change at the top trimmed things down from a 4-horse race to 3.

Baylor’s loss at Kansas State on Saturday night dropped the Bears two games back of co-leaders K-State and Texas Tech with two games to go, and all but eliminated Scott Drew’s squad.

Meanwhile, the Red Raiders’ win at TCU — another thorough domination by Chris Beard’s club, by the way — and Kansas’ close-call win at Oklahoma State kept those three teams separated by just one game entering the final week of the regular season.

For the Jayhawks, who got a strong showing from freshman Quentin Grimes to survive in Stillwater, Okla., the idea of playing into a share of the Big 12 title while sitting one back with three to go did not seem all that crazy.

But now, after K-State and Texas Tech both passed real tests in the hours that followed KU’s latest win, things are starting to look like a little bit more of a long shot.

Nothing has changed for Kansas. The Jayhawks still must go down to Norman, Okla., on Tuesday night and take care of 7th-place Oklahoma and return to Allen Fieldhouse on Saturday to knock off Baylor.

Lose either game and the streak is over.

The Wildcats and Red Raiders still have to take care of their business, too, but in order for KU to extend its unprecedented conference title streak from an NCAA-record 14 in a row to 15, the Jayhawks need both teams to lose a game in their next two. That’s what makes this so tricky.

If KU were just chasing one team, the odds would seem to be more in their favor. But needing both Texas Tech and K-State to slip up stacks the deck against the Jayhawks and puts the streak in serious jeopardy.

Here’s a quick look at where things stand, top to bottom, in the Big 12, followed by what Texas Tech and K-State have left.

Both teams are capable of handing the Red Raiders a loss, as shown early on in Big 12 play, when, coincidentally, the Red Raiders played at Texas and home vs. Iowa State in back-to-back games in January, knocking off the Longhorns in Austin, 68-62, before falling to Iowa State, 68-64, in Lubbock, Texas.

After losing tough road games by a combined 3 points at Oklahoma and Baylor last week, the Longhorns got right over the weekend by whipping Iowa State in Austin, 86-69.

With their athleticism, size down low and streaky ability to get hot from the outside, the Longhorns are capable of defeating just about anybody and certainly could give Tech a scare.

Beyond that, we all know how things go in Hilton Coliseum in Ames, Iowa, and that game — 1 p.m. March 9, the same time that KU will be playing Baylor in its regular-season finale — probably represents KU’s best chance at seeing a Texas Tech misstep.

Kansas State also plays Monday night — 8 p.m. at TCU on ESPN2 — and then closes its regular-season schedule with a home game against Oklahoma in Manhattan at 5 p.m. Saturday.

The Wildcats aren’t losing to OU at home. So the Jayhawks’ chances of extending the streak may very well come down to Monday’s game in Fort Worth, Texas.

KenPom.com has K-State slated to lose that game, 64-63, with the Wildcats’ holding a 48 percent chance of winning the game. And their predicted odds of topping OU skyrocket to 69 percent.

Amazingly, K-State, like Tech with its two remaining opponents, played OU and TCU in back-to-back games earlier in the Big 12 schedule, beating both by double figures, including a 13-point road win at Oklahoma.

So there you have it. The Jayhawks are down, but they’re not out. They are, however, in a much tougher spot than they were in entering the weekend, needing positive results in four of the six remaining games that could have an impact on the Big 12 title race.

KU must win both of its games. That’s two.

And K-State and Texas Tech must each lose one game — that’s two more — the final four combined games those teams have left.

History, the schedule and KenPom say it's possible.

And things will become much clearer after both teams play Monday night.

Matt - For simplicity sake, if each of the top 3 win out, how is the seeding for the Big12 tourney figured?

And it's the bottom 4 that play the first day to get things going? Could UT possibly fall to a play-in game?

Texas definitely could, although I'm not sure what the tiebreaker would be there. In order to fall into a tie for 7th, the Longhorns would have to lose out (at Texas Tech and vs. TCU) and OU and/or TCU would have to win out.

Seems like Shaka and company are in good shape to avoid the Wednesday games.

Working on something about the tiebreaker at the top right now so stay tuned...

The away game at Oklahoma might be the problem for KU. The Sooners recently have played better. Iowa State might have a win against Texas Tech. K-State might have the best chance to win both games. I am not predicting a 3 way to win the title.

I think K-State has the easiest remaining schedule. I think Texas Tech is the most likely to win it outright. And I think KU will have to play great to go 2-0.

My best guess at what things will look like next Sunday...

A few weeks ago, I would've thought 13-5 would've been guaranteed to share for it, but Tech and K-State have really played good basketball during that stretch.

Going to be a fun week and, best guesses aside, anything is certainly possible!

had Azibuike not gotten injured, we wouldnt be having this conversation about IF KU can make it 15 straight LOL =-[

Despite prepared statements, I always thought Agbaji was for Moore, not Udoka. The Udoka linkage was PR to make Moore not feel as bad. It's also possible that Self was getting a little wobbly with Vick by that point and needed options.

maybe not Ochai, though I lean toward Brian's comment, but Q & Devon would be growing almost no matter what/who was playing around them. It's what Coach does with elite freshmen.

So many if-onlys this season.

If only Udoka hadn't gotten injured...

If only Silvio hadn't been ruled ineligible...

If only we hadn't crapped our pants against WVU...

If only we had shown up against ISU and TTU...

If only we had put up a better effort at KSU...

If The Streak dies, it won't be because of one huge wound, but a series of little cuts along the way.

This is surprising. KU-K-State the fifth best basketball rivalry.

KU-K-State was a huge rivalry when I was in school in the 70s, in both basketball and football. But back then, K-State was better in basketball than they are now, and we were way better in football that we are now. I don't consider it a rivalry at all anymore. Maybe that's because the K-State fans don't throw chickens at us or riot and burn down their own downtown anymore, they just show their lack of class by swearing on national TV.

But that rivalry still paled in comparison - especially in football - to KU vs that school in the state to the east of us. In football, it was the oldest rivalry west of Mississippi, and the 2nd oldest in the nation. Until that other school walked away from it.

For awhile Texas was a pretty good rivalry and today I think Iowa State is a better rivalry than K-State. I want to beat the Wildcats whenever we play them but for it to be a rivalry don't the wins and losses need to be more evenly distributed? We have owned them for about three decades now.

KU’s loss in Morgantown was the big downer.

A lot of people will be wondering if there's any way the streak ends if it extends this season...

"Lose either game and the streak is over."

Not mathematically. KU could still lose one game and share the title, if TT and KSU each lost both of their remaining games. Not likely, but mathematically possible.