Key dates for Jayhawks who might be considering leaving KU early 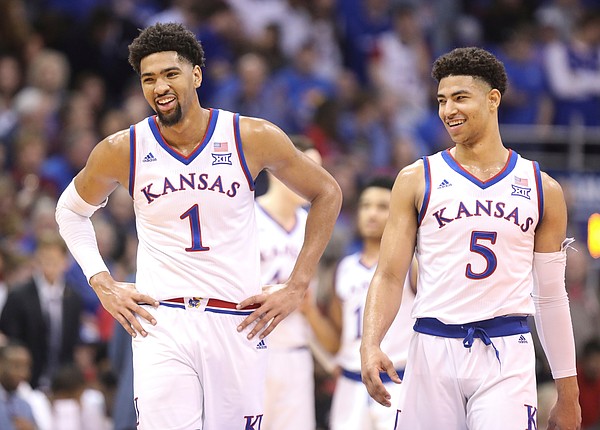 Kansas forward Dedric Lawson (1) and Kansas guard Quentin Grimes (5) have a laugh during a timeout in the first half, Saturday, March 9, 2019 at Allen Fieldhouse. by Nick Krug

With another Kansas basketball season now in the books and uncertainty on the horizon for the KU roster, it’s time to take a quick look at some key dates that could have an impact on the Jayhawks both today and in the future.

We all know that KU is losing just one senior from the 2018-19 roster. And we also know that Bill Self and company have signed two Class of 2019 guards — Christian Braun of Blue Valley Northwest and Issac McBride of Little Rock, Ark. — and are still on the hunt for a few more players to round out the current recruiting class.

What we don’t know is exactly how many spots Self will need to fill. KU could have as many as six of its 13 scholarships available in the coming weeks, and adding that many players to the 2019-20 roster would be a chore and almost certainly would require Self to add a couple of graduate transfers to the mix along with landing a few more players in the prep class of 2019.

Some of that was addressed earlier this week in my player-by-player look at the future of the KU roster. This one will dive a little deeper and focus only on the players who might be turning pro.

Dedric Lawson, Udoka Azubuike and Quentin Grimes sit at the top of that list, with K.J. Lawson also a possibility.

In order to do so, that group — and any other Jayhawks who feel like making the jump — will have to follow a strict process to make sure they’re (a) eligible to be drafted and (b) eligible to return should they not like what they hear in terms of feedback from the NBA in the weeks ahead.

Hiring an agent and staying in the draft of course, takes all of the guesswork out of the equation and immediately forfeits any player’s remaining college eligibility. The only wrinkle there is in the case of those players who stay in the draft and hire an agent but do not get drafted.

Those players, thanks to a new rule in play for the first time this year, are now eligible to return to school provided they terminate all agreements with their agents. It remains to be seen how this impacts both the individual players and the college game, but it certainly provides the players with a little more freedom to explore their options.

Neither Lagerald Vick nor Udoka Azubuike hired an agent a year ago, and, as a result, both were able to return to KU for the 2018-19 season.

We should know more about the intentions of Lawson, Azubuike, Grimes and potentially others in the next week or so. But while we wait for them to announce their plans, here’s a quick look at some dates they surely have circled on their calendars.

**• April 11 - The deadline for underclassmen to file paperwork for an evaluation from the NBA Undergraduate Advisory Committee, which, if granted, would allow them to hire an NCAA-certified agent to help guide them through the pre-draft process. The new rule, which went into affect last August, is yet another way of allowing underclassmen to retain their college eligibility while exploring a jump to the NBA.

Any player wishing to test the waters and/or be eligible for the 2019 NBA draft must declare his intentions by 10:59 p.m. Central on Sunday, April 21. Failure to do so will make the player ineligible in the 2019 draft. Doing so without hiring an agent will allow the player to retain his college eligibility.

This six-day event in Chicago is just like the NFL’s version by the same name, with workouts, medical tests, team interviews and full five-on-five scrimmages highlighting the event. Here, players can gather feedback from NBA officials about their game, what teams like, what they don’t like and what they believe the player needs to work on. Attendance is by-invitation only and the combine has proven to be an incredibly valuable tool for those trying to make up their minds to stay in school or turn pro.

This is a big one and it’s the day that both Azubuike last year and Svi Mykhailiuk the year before made their final decisions to return to KU instead of turning pro. That decision, if any of the current Jayhawks elect to go that route, will have to be made by 4 p.m. Central on Monday, June 10 (or earlier).

It’s too early to know exactly which Jayhawks will be draft eligible and which won’t, but with Azubuike, Lawson and Grimes all having the potential to leave early, it’s hard to imagine this date not meaning something to the KU program. There aren’t any lottery picks on the current roster and might not even be any first-round picks — although I do think Grimes could play himself into the end of the first round by testing well at the combine — but it’s hard to imagine at least one or two of these guys not getting picked in the second round.

Real quick, here’s a little more about the combine and eligibility requirements.

Prior to 2016, players could only declare for and withdraw from the NBA draft one time. However, that rule changed with the NBA’s new collective bargaining agreement and players are now allowed to withdraw from draft consideration twice during their collegiate careers, provided they follow the proper timeline and do not hire an agent.

That’s a lot of information and a lot of dates to keep straight, which is why it’s so important for these guys to have good people in their corners working on their behalf. Usually that’s family and friends — Vick’s mom, LaLa, did a masterful job of keeping her son’s eligibility a year ago — but Self also has proven to be a tremendous asset for his players when it comes to the stay-or-go decision and all of the details that come with it.

We should all know a lot more when we find out which players are planning to test and which are not.

In the past, combine invitations went out a week or so after the early entry eligibility deadline, so look for the KU crew to know which players are headed to the combine sometime in late April.

Not only will that help shape their individual decisions, but it also could play a key role in KU’s recruiting plans for the rest of the Class of 2019.

Interesting to note that Matthew Hurt's decision date is April 19. I'm sure we'll know by then who is at least testing but we might not know who is for sure staying in the draft. I wonder how it might impact his decision (if at all) if Dedric doesn't hire an agent right out of the gate.

Matt Tait - If a player hires an agent, enters the draft, and is NOT drafted,

1) is there a date by which he must terminate the agent(s) agreement(s) to be eligible to return to college?'

2) In the above scenario, is he eligible to return only to the school he was at?

3) Is the school required to accept him back onto the roster?

Good questions. I know they can return (if the coach allows it) after hiring an agent.

Big, bad Auburn roasted the Tar Heels and Uncle Roy last night. At least KU was not the only team they picked on.

I'd like to see them roast UK as well but Auburn will have to do it without their top rebounder. Will be a tall order for Auburn who have already lost to the wildcats twice this season.

no problem, they did it

I just can't see Q leaving unless the NBA sub league, whatever they call it now, is viewed as a better grooming league than college. Q needs at least one more year and put up 15 pts per game. Dok, still think he needs to develop a FT shot that can get him closer to 60%. Right now he is a hack a shack and that detracts from his late game minutes. Dedric, 100% I think he should go now after that monster year. I just can't see him exceeding that. This jazz about his strength can be built in the NBA like Embiid. That is it as far as movement other than Charlie leaving. Not sure about KJ.

That being said, it is silly to compare Dedric to JoJo. Dedric has had 4 years plus more youth league. JoJo had 1 and 2. JoJo was also a top pick and the commitment from the team for the 2 or 3 years to develop before actually playing. Dedric won't get extra time unless it is in the minors.

Again who the hell is being drafted on this roster? I can’t believe their is a “decision” for anyone. The decision should be to find a heart in the off-season.

“May 29 – NBA Draft early entry withdrawal deadline … That decision, if any of the current Jayhawks elect to go that route, will have to be made by 4 p.m. Central on Monday, June 10 (or earlier).”

How about this approach:

Hey Matt, it appears you may have put the wrong date on the early entry withdrawal deadline. Could you clarify the date please. Thanks.

If Grimes leaves, it appears we have several people potentially replacing him:

And then there is still potential recruit in Cassius Stanley.

This next month will be pretty telling for KU next season. Could turn around our aspirations quickly.

I find the Quentin Grimes going pro routine... quite comical. He is an "inconsistent" shooter (kindest word I could find).... and he is slow-footed for a shooting guard. He can't keep people in front of him when defending.