Saturday's 2nd half was all about pride, but the season-ending loss was still devastating for Kansas 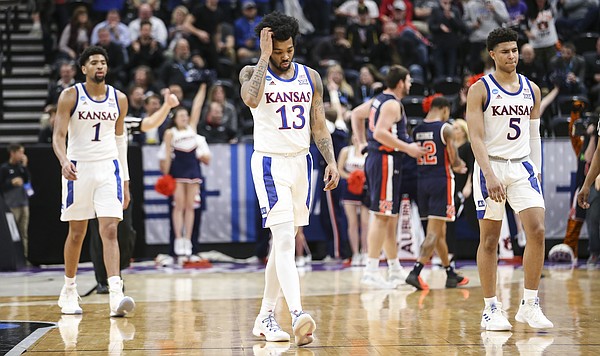 Salt Lake City — It was not words that were the currency of choice in the Kansas locker room following Saturday’s 89-75 loss to 5th-seeded Auburn in the second round of the NCAA Tournament, but sounds and sniffles and pauses and sighs.

That was all that was needed to describe the devastation and disappointing pulsing its way through KU’s small corner of Vivint Smart Home Arena that will forever be known as the place that the challenging 2018-19 season went to die.

Devon Dotson sat with a towel on his head and did his best to answer questions from reporters about what went wrong and what comes next.

Mitch Lightfoot stayed strong early but eventually let the tears go as more time passed. And then there was Dedric Lawson, KU’s All-American forward who recorded yet another double-double but finished the season sobbing into a towel on his lap and painfully preaching about how this was his fault, he let his team down, he didn’t do enough.

“It hurts. It hurts bad,” Dotson said in a muted tone. “The season’s over. It just hurts. Really, it just hurts.”

The end always hurts. That’s nothing new. But there was something different about this ending, for this team, during this particular season.

After months of adversity, ups and downs, disappointing moments and even a few high hopes, the Jayhawks finally fell for the last time. And this wasn’t one of those of can’t-get-over-the-hump falls. This was a tumble-from-the-tree-house-with-no-time-to-free-your-hands-to-break-your-fall loss.

And those are the kinds of losses that leave you gasping to catch your breath and wondering what you could’ve done different for hours and days on end.

Down 10 before they could blink, 17 a few minutes later and 26 by halftime, the Jayhawks, if they were being honest, knew in the locker room after the first 20 minutes that a comeback was probably not in the cards.

Sure, their hearts wanted it. And, yeah, even parts of their brains might have believed it was possible. But they also knew what kind of animal was on the opposing bench and even if the Jayhawks had played their absolute best for the entire 20-minute second half, they knew they probably still would not have found enough good fortune to deliver what would have been the largest comeback in school history.

So at that point, their minds shifted to the one thing they could still control — playing with pride and going out with their heads held high.

“That’s what it’s about,” Dotson said. “I mean, we were down by like 20 and we just wanted to give them something to guard.”

Added Lightfoot, who said Saturday’s feeling was the worst of the three NCAA Tournament losses he has experienced while at Kansas: “So many guys care so much about it and it’s more about the pride and the place you play at and the people who back you and each other and coaches. We were fighting for everything.”

Doing so allowed the Jayhawks to keep the final score respectable. The 89-75 margin on the scoreboard certainly was not reflective of the way Auburn dominated the game. But it was fair in that it showed that Kansas never laid down.

Sophomore guard K.J. Lawson, who just wrapped up his first season as a Jayhawk, said that aspect of Saturday’s setback was incredibly important to everyone in the Kansas locker room.

The program means too much to too many people for this group of guys — a crew that has been ridiculed and criticized, cussed and consoled, that will always be remembered as the team that didn’t win the Big 12 regular season title — to let what happened in the first half be the lasting memory of a season gone wrong.

So they scrapped. And fought. And somehow played well enough to outscore Auburn by a dozen in the second half. And this was no pity party either. This was a real effort against an Auburn squad that had its starters on the floor into the final few minutes. So that was at least something.

K.J. Lawson drew a comparison to a boxing match in which the challenger was being thoroughly beaten and out-boxed by the champ.

“You’re just playing for pride, playing for those guys that came before us,” Lawson said. “At that point, you just have to make it respectable. You know, this is the NCAA Tournament. It doesn’t really help any, but you still have to do it. That’s like a moral victory, trying to get to the 12th round. I know I’m about to get knocked out, but it just shows we didn’t give up and just let them crack us in our dome.”

Had the halves been flipped, it might have been Kansas that left Utah moving on to the Sweet 16 with its dreams of playing for a national championship still in tact.

But those numbers only show indirectly how utterly different the first half was. After all, even though KU caught fire and made Auburn work, the Tigers still did shoot nearly 50 percent in the second half. That came in stark contrast to the 29.6 percent shooting the Jayhawks delivered in the first half.

“I’m proud of our kids,” KU coach Bill Self said with complete sincerity. “We hung in there (in the) second half and didn’t get a lot of stops.”

The tears will flow for a while still. The pain will last. And some of these guys will never fully get over the disappointment they felt on Saturday night. But at least that second half will help. At least they have that. At least they didn’t lay down and lose by 52, even if it might have felt like it.

“Definitely better effort,” Dotson said of the second half. “We showed signs. But, you know, a loss is a loss. And this one hurts. I don’t know. I’m just sad, heartbroken from this loss.”

Great the way the team fought to make it respectable. In many ways a great year in terms of effort, not in production. Coach Self had to remake the team 3 times. We had more injuries than you can shake a stick at. The NCAA thing has been a deep shadow, Silvio couldn't play. LaGerald Vick was doing his own thing. Teams knew they could gang up on Dedrick, because we could not consistently make them pay. When Garrett is in the lineup, effectively it is 5 on 4,same for Mitch, and certainly Charlie.

That same pride that let this team fight its way back to at least respectability, needs to drive this team next year. Our program, our fans, our heritage demand it, and if you don't want to be part of that, then you should be some place else.

If any of our recruits for next year can play aggressively, shoot the 3 and get to the hoop and score, then they will play a lot. If they can play defense and do those things, they could end up starting. Coach was really pretty patient this year. Next year, I don't think so.

Outscoring Auburn by 12 in the second half was just not enough to overcome that huge deficit. But I'm proud of our guys for that winning second half, for how they tried, and how they overcame so many difficult obstacles throughout this season. I'd love to see them all back next season but know that's not likely to happen. I just hope we can keep Grimes and others who are rumored to be considering a transfer. I think next season we'll see the Grimes who was MVP last summer.

Lets look at the cupboard: Grimes the biggest disappointment on the team for a guy rated as the 8th best player in the country; Garrett he cannot shoot from the outside with any force; Charlie Moore cannot shoot period; Mac I love him but coach doe not play him; KJ Lawson love him but coach does not play him; Dotson great player but not a point guard; D Lawson will fill up the stat sheet but soft on defense not athletic misses a lot of bunnies and cannot jump, Lightfoot can be pushed around inside and cannot shoot very well. Coach Self, can be set in his ways. What we need: A point guard, athletic players, power forwards, someone, anyone who can shoot a three. NBA: Doak a poor choice injured too much, cannot shoot from more than 5 feet and cannot make free throws. D Lawson, not athletic enough for the NBA and his defense will kill him. Grimes a year maybe two from the NBA can't hit 60% from the free throw line.

Grimes is quite effective when he drives to the basket and he needs to do more of it. Also, when his way is stopped he needs to take a short to midrange jumpshot, often just the driving itself opens up rebounding spots for our other players, and if he shoots and even misses, then it can still work for us. The same for Ochai. He has to get shots, and driving for the mid to short jumpshot could do it. In many games we simply do not get downhill and if we do we charge into a mass of players or turn the ball over. These jumpshots will help open up the floor for us. And also passing lanes.

Fact is if Lawson does not come back we will have to develop all over again and if Doke does not come back, double that. What we have are 5 or 6 6/5 players who can play, but can they dominate, can they show the spine necessary for success, that is very much the question.

Still we have a great coach, and a great tradition and great fans, and if one year is not sufficient for our return then perhaps it will take two. I look back and I remember when Nadir sharpe was our point guard and it seemed that all was lost, and then we pulled it all back together.

"Dotson is more of a scoring guard than a point guard."

Completely wrong. Self recruited Dotson to be our PG. Dotson has played the PG through HS, AAU and now one season at Kansas. Next year, Dotson will be our starting point guard AGAIN.

He is our best FT shooter, ball handler and driver and assist leader. TFF

Where did you dig up this little nugget of falsehood.

"Had the halves been flipped, it might have been Kansas that left Utah moving on to the Sweet 16 with its dreams of playing for a national championship still in tact".

As Fred White (Royals Announcer) used to say if "Ifs and Buts were Candy and Nuts, we would all have a Merry Christmas".

Congratulations to "positive" Matt! He has been promoted to KU Sports Editor replacing the "negative" Tom Keegan (I just found this out today, stumbled across that info.)

Pride? Auburn just slowed the tempo down further which did allow Kansas to close the gap but there was never any thought of Kansas coming back.

I don't know. Maybe they did play with pride, I hope they try with pride AND talent in the future.