2nd Round matchup between KU and Auburn set to tip around 8:40 p.m. Saturday 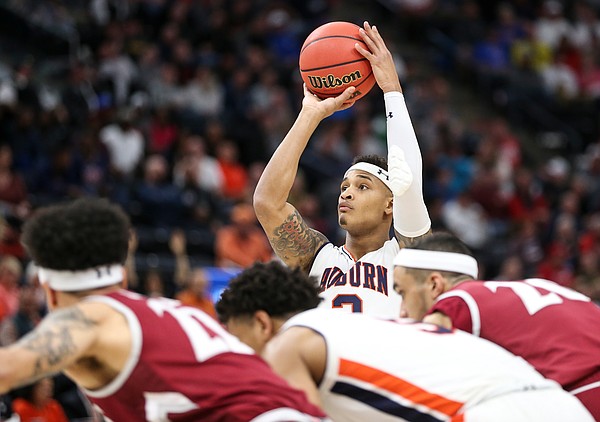 Salt Lake City — For just the second time in the history of the two programs, Kansas and Auburn will square off on the basketball court on Saturday night, with the winner earning a trip to the Sweet 16 in Kansas City, Mo.

And we now know that that game will tip off around 8:40 p.m., roughly 30 minutes following the 6:10 tipoff between top-seeded Gonzaga and No. 9 seed Baylor in the first of two games in Salt Lake on Saturday.

That much was made official on Thursday afternoon, when Kansas, the No. 4 seed, and 5th-seeded Auburn won first-round games at Vivint Smart Home Arena over Northeastern (87-53) and New Mexico State (78-77) respectively.

Auburn is led by head coach Bruce Pearl and features a team of ultra-athletic guards that, like Northeastern, can shoot the daylights out of it. Auburn, which finished tied for fourth in the SEC at 11-7 (26-9 overall) and won the SEC tournament by beating Tennessee by 20 in the title game, ranked second in the SEC in 3-point shooting, at 37.6 percent, third in scoring offense (79.6 ppg) and fourth in scoring defense (68.1 ppg).

Said Pearl in a self-assessment of his team after Thursday’s victory: “We play 10 guys and we fly around and we turn you over and we shoot a lot of 3s.”

Auburn and Kansas have met just once, with the Tigers winning a 1985 NCAA Tournament game in South Bend, Ind., 66-64.

Stay in touch with KUsports.com throughout the day Friday for much more on this matchup, including a breakdown of the game from both locker rooms.