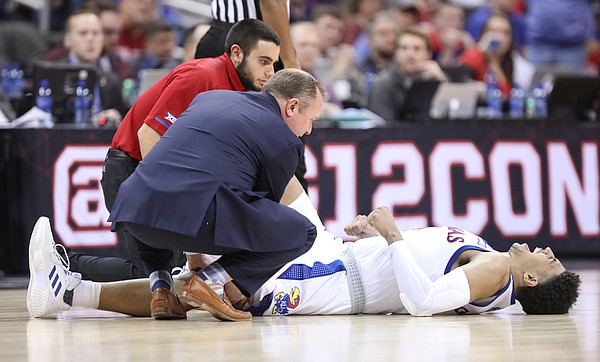 Kansas guard Quentin Grimes (5) is visited by trainers as he lies on the floor with a cramp during the second half, Friday, March 15, 2019 at Sprint Center in Kansas City, Mo. by Nick Krug

Kansas City, Mo. — Kansas freshman Quentin Grimes, who carried the Jayhawks to a halftime lead and 88-74 victory over West Virginia in the Big 12 tournament semifinals on Friday night at Sprint Center knew a couple of things right away when he went down with a leg injury with 6 minutes to play in the victory.

First, he knew exactly what was wrong with him. Second, he knew he needed to be anywhere but on the floor.

“Right when I shot it, the cramp came in right when I was releasing the ball,” Grimes recalled after his 18-point, 5 3-pointer night helped pace KU to victory. “I went to pass it but nobody was open so I just had to shoot it and then the cramp was pretty bad when I came down. … My whole leg cramped up and I was like, ‘Dang, I need to get up out the game now.’ I got some fluids in me and I should be good for tomorrow. I’m feeling better now.”

Helped off the floor by KU trainers, Grimes limped his way to the bench, where he quickly took in some Gatorade and electrolyte pills to get the fluids flowing through his body.

Before that, though, Grimes stayed down on the floor for a few minutes, writhing in pain and struggling to regain his feet.

Grimes was not the only one who was unafraid of the severity of the injury that had fans in the stands craning their necks the rest of the night to see if they could catch a glimpse of what was going on with Grimes.

Added point guard Devon Dotson: “Oh, I knew he was fine. We were kind of joking a little about it, talking about how he was cramping up last game, so I knew it wasn’t too bad. That’s how cramps can be.”

Like the rest of his teammates, Grimes spoke with reporters in the KU locker room after the game and said he planned to get some extra treatment late Friday night to ensure that he would be ready for Saturday’s Big 12 title game.

Kansas will take on Iowa State at 5 p.m. Saturday with the Big 12 tournament title on the line.

Please provide some kind of source for methylene chloride as a treatment for cramps because it's potentially toxic when absorbed through the skin or during prolonged exposure.

Dave, It was a "feeble attempt at a pun" linking organic solvents and grime. My bad! I am well aware that the fumes also cause narcosis, I worked around it. Ed

Methylene chloride? I don't think so.

Call up Devonte, and chat a bit. He was chronically plagued with cramps until he switched from sodas to water. Sodas are loaded with phosphorus which is opposed to potassium; forces it out of the body. There's not even a need for electrolytes in most cases. Just water and skip the sodas. Even gatorade has oils and stuff that aren't needed, and can even be counterproductive when you get to the point of cramping. Prehydrate early in the day too. I was also that guy all through HS, college, and well into adulthood.

Lots of water and skip the sodas.

Phosphorous does not force potassium out of the body. Gatorade is not counterproductive for an athlete that is cramping because of dehydration. Yes, water is great for you, but it doesn't have the necessary electrolytes to help with cramping when those electrolytes are depleted. There is a reason the KU trainers still use Gatorade and electrolyte pills, because they work.