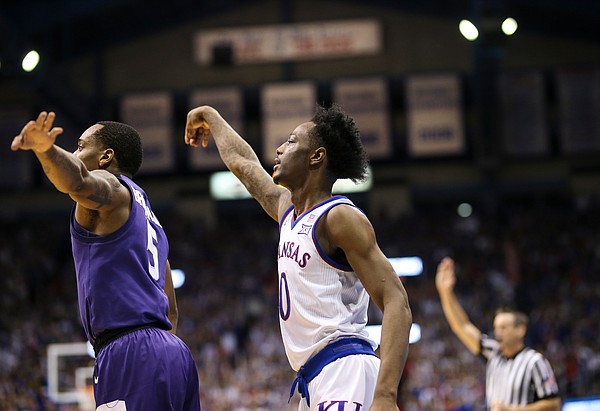 Topeka — The college basketball 3-point line is moving back at the Division I men’s level during the 2019-20 season and the Kansas Jayhawks aren’t too worried about it.

That was the vibe given off by four current Jayhawks who were at Washburn University working former KU player and assistant coach Brett Ballard’s summer camp on Thursday.

Ochai Agbaji, Marcus Garrett and newcomers Tristan Enaruna and Issac McBride all were well aware of the change coming to the college games during the upcoming season. But none of them seemed to think the rule change, which will move the 3-point line back roughly 17 inches, — from 20 feet, 9 inches to the international distance of 22 feet, 1.75 inches — will have too great of an impact on the game or the way they play it.

“I don’t feel like it’s too much different,” said Garrett, a junior guard who made 12 of 49 3-point attempts last season. “When we played in Italy (summer 2017) we played with that line and it didn’t feel that far back.”

McBride, a true freshman from Little Rock, Ark., who shot 48 percent from 3-point range during his senior season at Baptist Prep, said the new line has already been put on the KU practice courts and does not seem that out of place.

“Once you’re playing in a game, you don’t even recognize it,” McBride said. “You just shoot.”

Agbaji, a sophomore who made 23 of 75 3-point attempts in 22 games for the Jayhawks last season, shared that same philosophy.

“For now, just getting used to it really," he said. "But I feel like in a game setting or game environment when we’re not really thinking too much, to step in and shoot a 3 from that far, you don’t really notice. I think once we’re just playing, once we get going, it won’t really be anything.”

Garrett, who again has sought out to tweak and retool his jump shot during this offseason, said most of the workouts his uncle and former AAU coach Matt Watts put him through during a quick trip home to Dallas after school ended consisted of a steady diet of NBA-range 3-point shots anyway.

And Garrett reasoned with the NBA line still sitting a foot and a half farther back in most spots — 23 feet, 9 inches around the arc and 22 feet in the corners — being able to consistently shoot and hit that shot should make the new college line much more manageable.

“My whole workout was just NBA 3s,” Garrett said. “People say the same thing about high school and once you leave college and go to the NBA. It just keeps moving back.”

There was one Jayhawk who spoke about the change on Thursday who was willing to admit that the new distance could have a noticeable impact, at least at times.

But Enaruna, a true freshman from Wasatch Academy in Mount Pleasant, Utah, who originally hails from Netherlands, seemed to think that the new line was something he quickly would adjust to.

“Yesterday, with my shooting, I was actually walking in a little bit, having my foot on the line because the high school line is closer,” Enaruna said. “So I’ve got to get used to that. After a while, when you get tired, you’ll feel it. That’s where the difference comes in.”

(all distances measured from the center of the basket)

There should be one line for amateur basketball across the board.

ok, Garrett probably shouldn't have been the one quoted on the change in 3 pt shooting....he'll miss just as badly with the new line as with the old line.....thus not affecting him at all....lol still love him as an all around player though........

True that, kind of funny that he would comment.