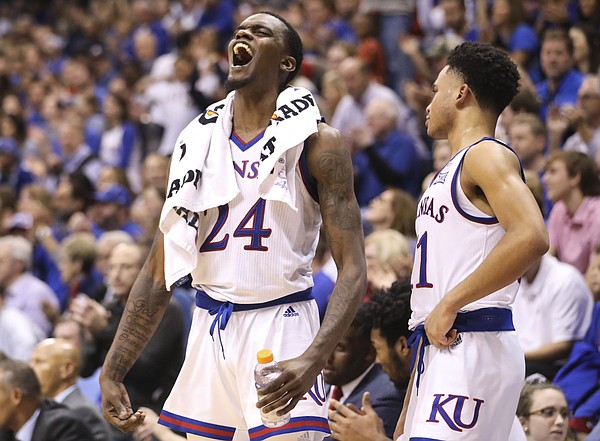 Kansas guard Lagerald Vick (24) celebrates a dunk by teammate David McCormack (33) during the second half of an exhibition, Thursday, Nov. 1, 2018 at Allen Fieldhouse. by Nick Krug

Former Kansas guard Lagerald Vick is getting his shot in the NBA.

Vick, who had an up-and-down, four-year career at KU, both on and off the court, has agreed to join the Houston Rockets’ Summer League squad, according to a report from Ian Begley, who covers the Knicks, Nets and NBA for SNY TV in New York.

Undrafted in last week’s draft, Vick, who graduated from KU in May, earned the opportunity with the Rockets on the strength of several individual workouts with NBA teams in the days leading up to the draft. Vick had workouts scheduled with the Washington Wizards, Charlotte Hornets, New York Knicks, Oklahoma City Thunder and Chicago Bulls.

Prior to the June 20 draft, KU coach Bill Self said he had heard that Vick looked good during those workouts and that he shot the ball extremely well.

That skill, along with his athleticism, is the reason Vick is getting a chance to audition for a spot on an NBA roster.

After helping lead the Jayhawks to the 2018 Final Four, Vick, a native of Memphis, initially elected to leave KU a year early in pursuit of his professional opportunities. But a change of heart and lack of buzz in the pro ranks led him back to Kansas for his senior season, where he caught fire to open the 2018-19 season and shot 45.5% from 3-point range for the season.

However, his senior season and KU career ended 13 games early when Vick left the team on an open-ended leave of absence to tend to personal matters back in Memphis last February. Vick never returned to the Jayhawks’ lineup and ended his career as a 1,000-point scorer who may be best remembered for a series of highs and lows, both of which showed up during the 2018-19 season.

Despite the hot-and-cold nature of Vick's career, KU coach Bill Self said he appreciated all of the hard work and production the athletic wing from Memphis brought to the program during his four years in Lawrence.

“People should remember Lagerald in a very favorable way, no question,” Self said leading up to KU's final home game of the 2018-19 season. “We won three (league titles) and won 10 games in the NCAA Tournament in (his first) three years. You know, there’s not too many players out there in the country who can say that. And he’s played a role in that and, certainly, he got better over time.”

Prior to that, when Self was asked what kind of jump he could see Vick making before the 6-foot-5 guard’s junior season, it was Self who first brought up the NBA.

“I think Lagerald went from nowhere to being an NBA prospect (during the 2016-17 season) and I think he could play himself into being an NBA player not just a prospect.”

A lot has transpired since then, including Vick becoming an even better shooter and scorer, and his chances of sticking with the Rockets or any other NBA franchise remain up in the air.

This spring, while back home in Memphis, Vick served as a coach of sorts, working with players on the basketball team at his old high school to help develop their skills on the court.

The NBA’s Summer League is set to run July 5-15 in Las Vegas.

The complete Summer League rosters have yet to be released, but there's a decent chance that a few other former Jayhawks could be playing in Vegas, as well, with Frank Mason III, Devonte' Graham and Svi Mykhailiuk being the most likely former KU players to land on other Summer League rosters.

Vick I could see as making it in the NBA if he shoots lights out, like he did in the early part of the season (I realize not against NBA players). He needs to improve his handle clearly, but I'm rooting for this guy. A four year guy with KU and did some really impressive things.

I think shooting is a need in today's NBA and someone who can drill it from outside consistently will make a roster.

Yes best wishes for a successful future. Surprised the personal matter was never identified The fact he never returned and even didn't show for the banquet might make one wonder what the reason might be.

From what i gather each time Vick went home he had to go take care of his child and family. Whatever the issues, he was supposedly being man of the family and taking care of things.

Pretty snide remark! Lots of ppl care about Vick, I've always liked his play and for 4 years, he gave us his all. I'll never forget his breakaway 360 in the sweet 16 game plus we don't beat Duke in elite 8 game without his play imho.

It's too bad Vick never heard the crowd cheering him for what he did during his time in Kansas.