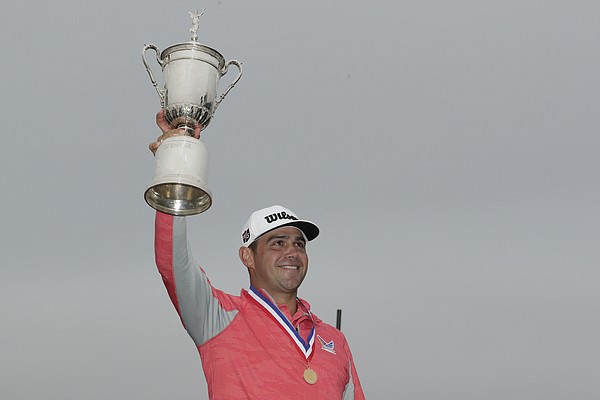 It takes a lot to move the sports needle in basketball-crazed Lawrence, Kansas. But former KU golfer Gary Woodland did just that over the weekend.

All that was missing was the sound of honking horns downtown and on campus.

Just like one of those weekends in March when the Jayhawks are playing in the Final Four, or for the right to get there, there were watch parties and rally cries, unbridled excitement and nervous energy, all with people tacking on as many “Rock Chalks” as humanly possible to show they were both clued in on and behind Woodland’s quest to claim the 2019 U.S. Open title at Pebble Beach.

Equal parts steady-Eddie and shot-making magician, the 35-year-old Woodland, who finished at 13-under for the tournament — three shots better than two-time defending champ Brooks Koepka — turned in the tournament of his professional life in California this weekend.

His run of 34 consecutive holes of par or better that stretched from the final nine holes of Round 1 to the first seven of Round 3 was nothing short of spectacular. And so many of those pars and birdies were the result of his extreme focus and ability to stay in the moment, something Woodland’s friends and foes alike say is one of his biggest strengths these days.

All of it made Woodland’s weekend must-see TV around Lawrence, and his pursuit of the title brought out all kinds of Woodland stories, both from those who knew him and those who merely felt like they did.

Lawrencians who barely follow golf were not only on top of what Woodland was doing out west, but many of them also actually made it a point to pull up the Open on their phones to watch a few holes here and there when time allowed them to do more than just check the leaderboard.

The whole thing created a sense of community and university pride on the local sports scene that I’ve only seen or felt in Lawrence when the Jayhawks have been in the middle of a deep NCAA Tournament run or when Todd Reesing was playing quarterback.

Woodland’s run had the feel of one of those events that the Granada could’ve put on its big screen and drawn a packed house.

Pride runs deep in these parts, and Woodland’s push for one of golf’s four majors brought that to the forefront for so many Kansas fans, whether they gave a flip about golf or not.

Woodland’s is one of those stories that everyone likes to find a way to connect to them. Maybe you know a guy who knows a guy who played golf with Woodland’s dad.

Maybe you went to the same Topeka high school as Woodland. Or your parents did.

Or maybe you simply caught word of Woodland’s Washburn basketball beginnings and it inspired you to learn more and follow along a few weekends a year as he became a bigger and bigger deal on the PGA Tour, tumbling inevitably toward this moment.

Heck, you might’ve even seen him at a KU basketball game one time. He likes those. He might’ve even given you a quick head nod or briefly said hello.

Whatever the link, no matter how big or small, it’s one you want to have at the ready for weekends like this.

A week ago, Woodland was just another guy with whom you had a lot in common, save for his insane ability to absolutely bomb a golf ball and then, a few hundred yards later, show the delicate touch of a microsurgeon.

Today, Woodland has something that neither you nor dozens of the greatest golfers to ever play the game have in their possession — a major championship.

That, and all the confidence and time in the world to add a few more.

I don't know Gary, and he wouldn't know me from Adam, but I've been following him closely for a few years now (watching the PGA shot tracker and play-by-play stats in each round of each tournament), because he's a Jayhawk, and by all accounts, a really great guy.

It's wonderful that he got the win, but so far not a lot has been made of the quality of it. His 65 in round 2 is one of only five in all of the U.S. Opens to be played at Pebble Beach, and his 36- hole total of 133, and his 13-under tournament are all-time records for a U.S. Open there. And, he won this tournament by three strokes, which is impressive enough, but the next nearest competitors, i.e., tied for third, were six strokes in back of him, so you could say he almost dominated this one.

In his interview following the win, he mentioned that some aspects of his game still need improving. I have to believe that we haven't seen Gary's last major title yet.

Family members know Gary and his parents and report he is a genuinely nice person with a good heart. Its also apparent he is KU passionate as seen occasionally when he uses Jayhawk head covers although missing during the Open. I don't know for sure, but his Sunday and just about every other day golf outfit is blue which might be related to the crimson and blue. Regardless, I was so happy to see him win and do so in class and style.