The jersey numbers are official for KU's 2019 newcomers 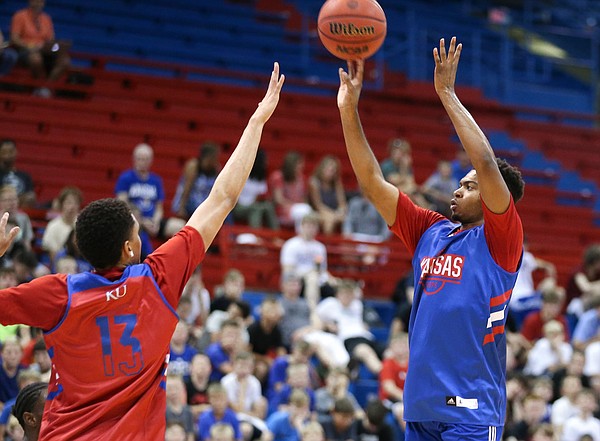 Kansas freshman Isaac McBride puts up a 3 over fellow freshman Tristan Enaruna during a scrimmage on Tuesday, June 11, 2019 at Allen Fieldhouse. by Nick Krug

The jersey numbers are out for the five newcomers who have joined the Kansas basketball roster this offseason.

And while there’s no telling exactly what their futures hold, this group, at least as of today, appears to be a group that Kansas fans should expect to see around for a while.

Of the group of newcomers, only Isaiah Moss, the senior grad transfer from Iowa, is expected to be gone a year from now. And many of the players on that list are likely to be three-, four- or even five-year Jayhawks.

So gobble up those jerseys at your discretion.

And then, of course, you have the recent news about sophomore point guard Devon Dotson switching from No. 11 to No. 1, a move that brings him back to the jersey number that served him so well during his basketball-playing days that predated Kansas.

Walk-on Elijah Elliott, who redshirted and wore No. 10 last season, has taken over the No. 5 jersey, which became available when Quentin Grimes decided to transfer.

I made a comparison about two of them on Twitter the other day that threw a few people for a loop. So I figured I might as well get into it a little here.

Although they both have a long way to go in terms of matching their talent, McBride and Braun could very well become the next Devonte’ and Svi at Kansas.

Both are tough competitors who love to play the game and love Kansas (already). Both are likely four-year players who fans will get to watch grow up, both as players and as men. And both figure to become fan favorites at some point during their careers, with each playing with a fearless style and sense of pride that so many Jayhawks before them have brought to the table.

So, no. I’m not saying that either player is a sure-fire All-American, Big 12 player of the year or future NBA draft pick. But I think both will be loved by Jayhawks everywhere and I think both will play huge roles on a whole bunch of future Kansas teams.

In that way, at least to me, they very much have the makings of Graham and Svi Part Deux.

And now that you know what numbers they’ll be wearing, you can start getting used to seeing a lot of good things from the No. 2 and No. 55 jerseys in the days ahead.

I’m looking forward to asking McBride why he chose 55. There has to be a good story there.

Only six Jayhawks all-time have worn No. 55, with the most recent being walk-on football player James Sosinski in 2017-18.

Those other newcomer numbers are pretty common and have been seen around Lawrence a lot over the past few decades.

Sherron Collins, Devonte’ Graham, Nick Collison and Ryan Robertson all wore No. 4, which was also Moss’ number at Iowa.

Svi Mykhailiuk, Tyshawn Taylor and Kirk Hinrich, among others, wore No. 10.

Wilt Chamberlain and Jeff Boschee were the best-known Hawks who rocked No. 13.

Kenny Gregory, Steve Woodberry, and, most recently, Tyler Self, were three of the most popular players who wore No. 20.

And Wayne Selden Jr. and Dedric Lawson were the most recent Jayhawks to wear No. 1.

A quick search of his YouTube highlight clips showed that McBride wore both No. 4 and No. 5 throughout his prep and AAU playings days. So, again, there has to be a story there about why he went with the double-digit, big man number.

2019-20 newcomer uniform numbers are set (with one returner changing it up 👀).#KUbball pic.twitter.com/fmlSfTsh7U

So I guess ELIJAH ELLIOTT is getting a new number?

Elliott taking 11 since Dotson changed to 1.

My bad, KUAD official roster has him as 12, not 11. Earlier info I had was wrong.

Haven’t even had anything to drink today.

BTW, thanks, Matt! Much appreciated!

Looking forward to both the football as well as basket ball seasons! Not sure I would still live in KS if it wasn't for the wonderful times all past, present & future teams! ROCK CHALK!!

number 10, Tyshawn Taylor, will always be special to me. Tyshawn made me feel so comfortable with him bringing the ball up court and breaking down the opponents defense. Sure he had a few off court missteps, but that kid spent four years at Kansas and was the first in his family to get a college degree. Coming from some mean streets where things could have gone wrong, I give him mad props! I think Jalen could carry on that tradition!

McBride looks like a very good ball-handler and I'm quite excited for his addition.