Jayhawks not shy about shooting from distance during Tuesday's camp scrimmage 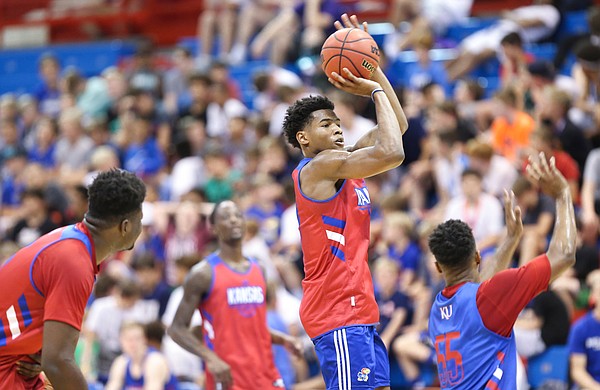 Kansas guard Ochai Agbaji pulls up for a jumper during a scrimmage on Tuesday, June 11, 2019 at Allen Fieldhouse. by Nick Krug

It was just one scrimmage with no real strategy or sets being run, but it still seemed worthwhile to track the 3-point shooting of the Kansas men’s basketball team during Tuesday’s camp scrimmage at Allen Fieldhouse.

In all, the Jayhawks shot 16 of 48 from 3-point range in the untimed, first-one-to-80-wins scrimmage, but that number, though interesting, is a bit misleading.

Big men Mitch Lightfoot, Silvio De Sousa and even David McCormack pulled 3-pointers that they might not otherwise have shot and the up-and-down, frantic nature of the game inspired the type of play that led to at least a few shots being jacked up in ways that you probably won’t see throughout the 2019-20 season.

Still, it was interesting to watch closely what a few of KU’s key shooters were able to do in our first live look at this new bunch of Jayhawks. More interesting still was the fact that more than half of the triples the Jayhawks attempted on Tuesday came from what appeared to be well beyond the new 3-point distance that will go into effect in college basketball during the 2019-20 season.

A KU official on Tuesday told me that while the new line — 22 feet, 1.75 inches compared to the old mark of 20 feet, 9 inches — has been put down in the Jayhawks' practice gym, it is not scheduled to be added to the Allen Fieldhouse floor until sometime in July.

You might recall from a recent story about KU’s 3-point shooting that these Jayhawks return just 28% of the team’s 3-point makes from a season ago. That means, if the Jayhawks are going to be any kind of threat from behind the arc, a handful of guys who didn’t make many triples last year are going to have to find a way to improve their consistency from the new international distance.

And it should be interesting. During the past couple of weeks, we’ve talked to just about everybody on the roster and to a man they all believe that the 2019-20 Jayhawks will have enough 3-point shooting to accomplish what they hope to accomplish.

Adding Iowa grad transfer Isaiah Moss, who shot 42% from 3-point range for the Hawkeyes last season, certainly won’t hurt, and adding newcomer Issac McBride, along with the presence of returning veterans Ochai Agbaji, Devon Dotson and Marcus Garrett certainly gives KU plenty of options to take the 3-pointers. Now we just need to see who will make them.

On Tuesday, the answer to that question began with KU’s starting backcourt.

Devon Dotson, who showed not only improved confidence but better range on his 3-point shot, made his first two 3-pointers, drained his last two, hit one deep jumper with his feet straddling the line and finished the day 4 of 9 from 3-point range.

If Dotson can hit 44% of his 3-point attempts this season, that will go a long way toward answering the question of whether the Jayhawks have enough shooters.

I’m not sure I can envision Dotson hoisting up nine a game, but again, this was a scrimmage. And the point here isn’t how many he took but what percentage he hit.

Ochai Agbaji, who has been hard at work on tweaking his jump shot so far this offseason was next and he hit 3 of 5 from downtown, good for 60%. To be fair, even the two Agbaji missed looked good on their way to the rim and I think there’s a strong chance that Agbaji can and will emerge as more of a knockdown shooter and consistent 3-point threat than many people realize.

Agbaji said after the scrimmage that he was working on eliminating the dip in his shot after the catch and that he had emphasized catching and going straight up with the shot during his offseason workouts. The goal? To speed up his jumper and shoot with a quicker release.

Based on what he showed on Tuesday, he’s definitely getting there.

“I’m back to where I’m shooting it with a lot of confidence,” Agbaji said Tuesday. “I feel good about my shot right now.”

Said Agbaji of Dotson’s strong performance on Tuesday: “He’s shooting with a lot more confidence, and I think that’s something we need.”

The three other most notable performers from behind the arc on Tuesday were junior Marcus Garrett, who hit just 1 of 6 from 3-point range, freshman Issac McBride, who hit 2 of 8 in the scrimmage but shot lights out during a Monday camp workout, and freshman Christian Braun, who hit 3 of 6 from behind the line, – all three pure swishes — including one from the left wing that might have been the deepest make of the afternoon.

There’s a long way to go before this team puts all of its pieces in place and draws up a blueprint for exactly how it wants to play on offense.

We know it won’t include 48 3-point attempts per game like we saw on Tuesday, but the mere fact that this team currently has enough players who are getting more comfortable and confident with their outside shots — with more help on the way — should be viewed as a good sign for what’s to come.

I bet Garrett shouts 33% or better. Any takers?

I think Bill Self will SHOUT more than Garrett this year.

De Sousa and Azubuike are going to take a lot of pressure off our perimeter shooters.