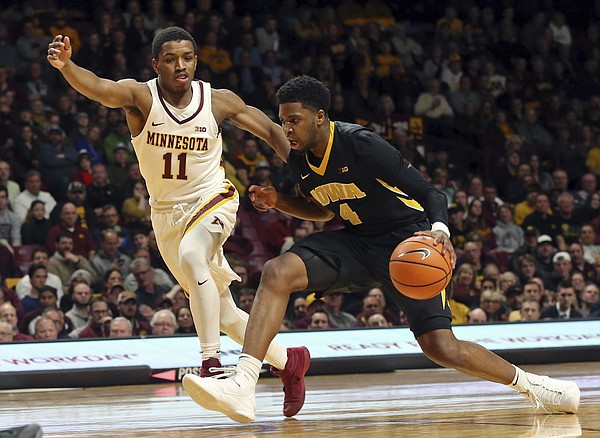 There’s a story going around about new Kansas guard Isaiah Moss scoring anywhere from 14 to 19 points in anywhere from 1:30 to 3 minutes during a game at Minnesota while he was at Iowa.

I first saw the eye-popping numbers on Twitter, didn’t quite believe it and then asked Moss about it directly when I was on the phone with him yesterday shortly after the 6-foot-5 graduate transfer known as “Zay” committed to KU.

Unlike some of the tweets, Moss downplayed the performance, saying simply that his team was down big and he was trying to help the team catch up.

“It was a stop-clock (situation),” Moss recalled. “But we were down like 14 points and we had this inbounds play, it’s an iso play, and they just kept giving me the ball so I just kept trying to take it down for pull-up 3s, fouls, I went to the (free-throw) line a couple of times, we were just playing catch-up.”

Here’s how it played out.

In late February of the 2017-18 season, the Hawkeyes played at Minnesota in the second-to-last regular season game of what was Moss’ redshirt sophomore season.

Iowa lost the game, 86-82, but not before Moss lit the net on fire to make it close down the stretch.

With 1:41 to play, the Gophers scored a fastbreak dunk that pushed their lead to 14 points — 74-60 — and pretty much sealed the game in the eyes of everyone watching.

But during the next 96 seconds, the new KU guard went off, scoring 19 points to help pull the Hawkeyes within two before Minnesota iced the game with a pair of free throws in the final seconds.

Moss started the party with an and-one jumper in the paint, added another jumper a few seconds later and then hit back-to-back 3-pointers for a quick 11.

From there, Moss hit another mid-range jumper, added three consecutive free throws (including a miss on the fourth attempt, which kept his run from being a 20-point outburst) and then drilled his final 3-pointer of the night with 3 seconds to play to pull the Hawkeyes within a bucket at 84-82.

“It was pretty much typical of being in the zone,” recalled Moss during Monday’s phone interview. “I don’t even know how to explain it, really. They just kept giving me the ball and I just kept trying to do what I do. But to know I can get into that zone felt good. I’m not gonna lie.”

Dargan Southard, who covers the Hawkeyes for The Des Moines Register and Iowa City Press-Citizen, said nights and stretches like that were typical of Moss’ Iowa career.

The minutes might not have always been consistent and his shots didn’t always fall, but when they did, you usually remembered it, Southard said.

“When he gets hot he can do some pretty crazy things,” Southard told the Journal-World. “He has games where he goes off and hits five or six 3s, and when he’s good, he’s really good and is a pretty potent outside threat. But it kind of came in waves this year.”

In a 20-point game against Iowa State during the 2018-19 season, Moss hit 8 of 12 shots from the floor, including 4 of 5 from 3-point range in a 14-point Hawkeyes’ win. The very next time out, in a win over Northern Iowa, Moss finished with 4 points and misfired on all three of his 3-point attempts.

But even at that, 4 of 5 one night and 0 of 3 the next still produced a 50% stretch, a fact that inspired Southard to call Moss, “one of Iowa’s more reliable offensive pieces for sure.”

That kind of up-and-down reality, however, kept him from gaining more notoriety and becoming a bona fide star at Iowa. But Southard said he could see Moss’ skill set translating well to what Kansas is looking for from him.

Moss said exactly that when I caught up with him on the phone.

He’s not looking for highlight moments or to have his name plastered across the headlines. If those things come, he’ll take them. But as long as the wins come, as well, Moss said he would be thrilled with whatever the future holds for him at Kansas.

“I just want to win at the highest level,” Moss said. “And I feel like if I play hard and do whatever coach asks me to do, that will help me fit in just fine.”

Scoring 19 points in 96 seconds certainly will never be frowned upon, but, at Kansas, the need for him to do that is less likely to arise.