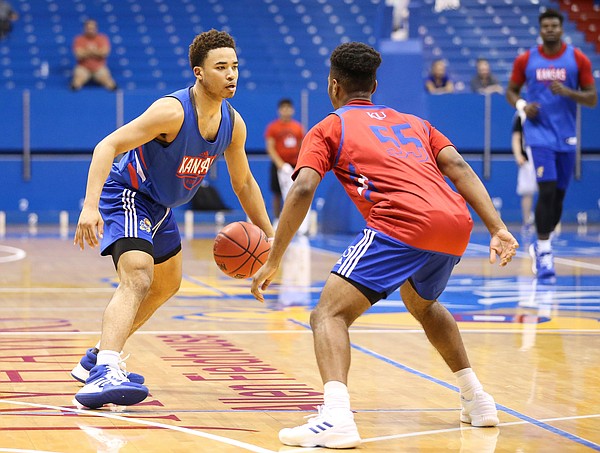 Kansas guard Devon Dotson looks to make a move against Kansas guard Isaac McBride during a scrimmage on Tuesday, June 18, 2019 at Allen Fieldhouse. by Nick Krug

Loaded with a deep and talented roster full of new faces and returning veterans, summer workouts for the Kansas men’s basketball team have been intense.

From players trying to prove themselves and earn their spots to individual battles and constant pushing for the sake of team improvement, the past couple of months have featured a hungry team fighting every day for the chance to get back on track.

“Our summer’s been way different, especially from last year,” said sophomore guard Ochai Agbaji. “It’s just a different vibe. A lot of guys, we’re going after each other every day to make each other better and I think that’s something that’s going to make us better later on in the season.”

The final day of the second session of summer classes is Friday and, from there, the Jayhawks will get three weeks off before returning to campus in August in time for the start of the fall semester on Aug. 26.

All of them, of course, will continue to workout and fine-tune their games on their own. But this new-look group will get a break from the daily grind of working out, lifting weights and playing pickup at all hours of the day.

“Yeah, yeah it does,” said Agbaji when asked if the deep roster has inspired more intense competition this summer. “Some practices we’ll get into it and some guys will get after it, but that’s how brothers are and that’s how we help each other get better and grow.”

Junior forward Silvio De Sousa, practicing with the knowledge that he’ll be eligible to actually play for the first time in 16 months, credited KU’s freshman class for a lot of that.

“I’m just real impressed with the newcomers,” De Sousa said. “We’re not even supposed to go this hard during the summer and during practices. I’ve just been watching the newcomers go against the older guys and it’s just a great thing. I see that we have a lot of dogs on this team and they want it bad.”

Added freshman Christian Braun, who seemed to embody the mindset of all of KU’s fresh faces: “It went really well. We’re almost done. Everybody’s doing a really good job of working hard and improving their individual games. We had a really good summer.”

With that in mind, here’s a quick look at four summer battles that could pay dividends for both the players and the team as a whole during the upcoming season.

It’s freshman vs. sophomore here and there’s no doubt that the two are striving to learn from and push each other. But the simple fact that they play the same position creates a constant opportunity for the two to guard each other in practices. There are few players in the college game with Dotson’s blend of speed, quickness and tenacity. And trying to keep up with that no doubt has been good for McBride. Beyond that, having a player of McBride’s caliber, who is quick in his own right and unafraid of any challenge has to have been good for Dotson’s development, too. McBride will back up Dotson when the season rolls around and battling with him all summer will make him more prepared to do so.

Earlier this summer, KU coach Bill Self called McCormack by far the most improved player on the Kansas roster. His ability to extend his offensive game and continue to put in the kind of work that thoroughly transformed his body into Division I material led to Self’s comments. But at the same time, there may not be a player in America who is more hungry than De Sousa. After missing an entire year because of an NCAA suspension, De Sousa is back and looking to make up for lost time. Because these two play the same position, there’s no doubt that they collide with one another at the rim and above it, in pursuit of loose balls and near the walls on a daily basis. Only one of them will start. But this kind of summer conditioning will absolutely make both of them better.

Two of the three (Braun and Garrett) can play multiple positions, making their battle as much about which player fits where as anything else. With Dotson entrenched at the point and Udoka Azubuike at the 5, that leaves some flexibility for KU at the 2, 3 and 4 positions. And all three of these players figure to factor prominently into each of those roles at different points this season. For Agbaji, the offseason has been all about taking that next big step forward. His attention to detail has been off the charts and he has reshaped his shot, his body and focused on adding to his ability as a leader. For Braun, it’s all about finding your footing. But teammates continue to marvel at not only how talented the freshman is but also how competitive and tough. And for Garrett, a legit upperclassman on this team, healing his injured ankle has been important but not as important as taking more ownership in the team than ever before.

It remains to be seen how the minutes are handed out to the bottom half of KU’s rotation this season. And it seems as if there’s a pretty high likelihood that at least one or two Jayhawks will redshirt during the 2019-20 season. Because Enaruna and Wilson bring similar things to the table in terms of size, athleticism, skill and experience, their summer production and performance in practices during the first several weeks of the school year could be crucial for their hopes of getting on the floor during the 2019-20 season. Enaruna arrived first but also has been back home in Netherlands preparing for the 2019 FIBA Europe Championship so some of that early advantage might have been negated a little. Self likes Wilson’s toughness as much as nearly any freshman he’s had and both are active in transition on defense and around the glass. There’s no doubt that both could play. And both have big time futures at KU. But if it winds up being one or the other for the coming season, this one could come down to whichever player shoots it better.

Excellent blog Matt Tait. It is always such a treat to pull up KUsports around noontime and have a fresh basketball piece to read over my lunch break. I do have a question for you: I feel like I've noticed a lot of quotes from Agbaji lately. I am not a journalist, but I have always wondered how exactly this works. Do you, as a reporter, have more access to some players than others? Is it a rapport thing, where you just get along well with certain guys? Or is it based on 'quotability', where some of the players are just really well-spoken and articulate? Or all of the above? Just curious. Thanks for all your awesome work!

No mention of Mitch or our transfer Moss? your thoughts Matt on their place on this squad?

Mitch is a huge part of this team and exactly the same dude he’s been the last three years... all heart, hustle & team-first. What his role will be remains to be seen but whether he plays big minutes or not, he’s huge because of his veteran status.

Moss hasn’t made it to town yet but I see him playing 12-15 minutes a game as long as the adjustment to KU goes well.

I think Silvio will edge out David, but David has plenty of minutes backing up Dok along with Mitch.