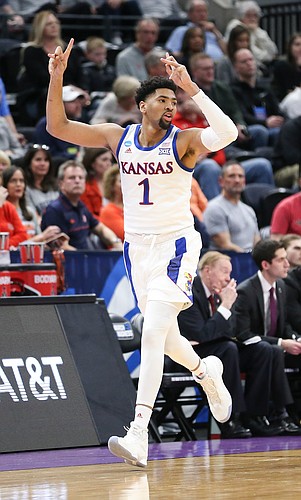 Quick, think for a second about the one current or former NBA player who you would hire to help mentor and tutor former KU forward Dedric Lawson as he starts his NBA journey.

How about Tim Duncan?

The Big Fundamental, who recently retired from a Hall of Fame career with the San Antonio Spurs seems like the perfect choice to help facilitate Lawson’s development from sleepy smooth college star to legitimate NBA player.

And now it appears as if Lawson will get that opportunity.

After playing limited minutes with the Golden State Warriors’ summer league squad in Las Vegas, Lawson evidently has agreed to a contract with San Antonio.

Several reports about Lawson’s deal popped up on Twitter Monday night and when you combine that news with the recent news that Spurs coach Gregg Popovich was hiring Duncan to be his newest assistant coach, it sure seems like the stars are aligning pretty perfectly for Lawson right about now.

Undrafted in June after an All-American season at Kansas in 2018-19, Lawson reportedly has agreed to an Exhibit 10 contract with the Spurs. This is different than a two-way deal in which a player splits time between the NBA club and its G League affiliate and, in some ways, is better.

Exhibit 10 contracts are basically non-guaranteed, one-year deals worth the league minimum. That number, for a player with 0 years of experience last season was $838,000. Not bad.

The good news there is that as long as you remain a valuable asset in the eyes of the team, you’ll be on the NBA roster, cashing legitimate paychecks and learning the game and life from people at the highest level. The bad news is if at any point they decide you no longer have any value, you can be cut without compensation.

Still, for Lawson, who has proven to be incredibly coachable and has a bunch of skills that could be groomed into a long NBA career, the opportunity to play for Popovich, in the Spurs organization and with Tim Duncan helping you out is about as close to hitting the lottery as any player can get.

Now it’s up to Lawson to make the most of it and show the Spurs that he’s worth their time and investment.

Talk about Christmas in July for McLemore. To go from unemployed and wondering where your next gig might take you to suddenly joining James Harden and Russell Westbrook in Houston. That's a much, much better scenario than anything the former KU star has experienced in his brief NBA career, even if the money and playing time aren't quite as high as the others.

McLemore still has a lot to offer any team, both in terms of shooting and scoring and as an athlete. This fit — from the way the Rockets play on both offense and defense to what his role might be — seems to be about as good as McLemore could've found in today's NBA.

Being told #Spurs have agreed to terms with forward Dedric Lawson out of Kansas. Deal is a non-guaranteed Exhibit 10 contract. #NBA @TheAthleticNBA pic.twitter.com/KGzSROQ92h

None by Jabari Young

I certainly wish Lawson all the best in his pursuit of an NBA career but it doesn’t appear to me that knowing how to play the game is a significant roadblock standing in his way. Lack of athleticism seems to be the issue and how do you learn that? Maybe a heck of a lot of weightlifting to build the bulk to be a force under the hoop. Good luck, Dedric.

None of that matters. All that is necessary when forecasting the the pro future of a player is to apply the Joe Ross Axiom.

Using this famous formula, Joe was able to predict that Perry Ellis would play the same position, exhibit the same skills in achieving the same professional success as Harrison Barnes simply because they were the same height and weight.

All that is necessary is to determine which fellow 6'9 240 athlete from among Larry Bird, Kevin Durant and Zdeno Chara will be his Lawson's benchmark.

I promise that if you ever go on a 2 week rant attacking everyone who disagrees with such an asinine premise, and NEVER back down from it, you'll be mocked for your stupidity until you do.

So he went on a two week rant and you've been carrying this on for 5 years. Who's the bigger arse in this scenario? As Eliott Reeder posted and as I have posted in the past: GET OVER IT ALREADY. You are starting to sound like a little boy obsessed with a little girl so you keep harassing her so you will be noticed.

The Spurs may be a good match for Dedric. You have to have exceptional basketball skills to play for Pop, and that is Dawson's strong suite.

Sounds like a match made in heaven, as Lawson and Duncan had much the same background in college.

Like Duncan, Lawson is really a power forward, but unfortunately, due to the the season-ending injury to Azubuike, he had to play center all year. Thus, I contend that he was unable to show his real talent during the past year, and that hurt his evaluation during the NBA draft.

I'll bet that learning how to play Power Forward under Duncan, and playing under the guidance of Popovich will help him to become a force for the Spurs.

That's nice for Dedric, but signing an Exhibit 10 contract doesn't mean he'll land on the roster. More likely he will spend the majority of the season on the Spurs' G-League team. The advantage he'll have is that he won't be limited to a total of 45 days on the NBA roster, like guys on 2-way contracts are. So he technically could spend the entire year with the Spurs but it's unlikely. I hope he is able to have a real chance to learn from Tim Duncan -- the future HOFer has the nickname "The Big Fundamental" for a reason. I hope Lawson has a chance to get some playing time in the NBA, but to expect him to be anything more than an end of the bench guy as a rookie isn't realistic.

Speaking of the Spurs, congratulations to R.C. Buford, who just got promoted to CEO. Who would have seen him having the type of front office career he has had back when he was a volunteer assistant coach for the Jayhawks?