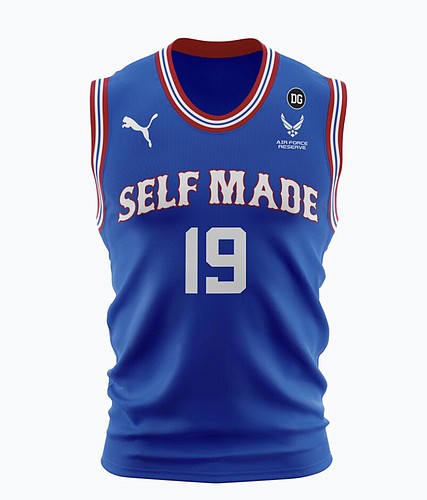 The uniforms for this year's "Self Made" squad in the TBT in Wichita in late July were unveiled this week. by Matt Tait

Team Self Made, the all-KU alumni squad that hopes to be playing for a $2 million prize in The Tournament in the weeks ahead, is hosting a meet and greet for fans at Jefferson’s West in Lawrence on Sunday.

Self Made general manager and lead guard Elijah Johnson will co-host the event from 3-6 p.m. Sunday and the club will be selling T-Shirts and mingling with fans as a small break in their training camp for the event, which is slated to begin Saturday.

“It’s just a meet and greet,” Johnson said Friday. “We’re trying to hang out, get some food and meet some KU fans. But we’re really just trying to interact with people as much as we can before we go down to Wichita and we want as many people to show up as we can get.”

Johnson said fans who purchase food and Self Made T-Shirts will also receive autographs from some of their favorite former Jayhawks. He did not know yet how many of the 10-man squad would be able to make it to Sunday’s event, but the team roster includes Johnson, Tyshawn Taylor, Travis Releford, Kevin Young, Darrell Arthur, Darnell Jackson, Mario Little, Perry Ellis, Jeremy Case and Landen Lucas.

In addition to hanging with fans and grabbing a bite to eat, Johnson and Nick Schwerdt, host of “Rock Chalk Sports Talk” on KLWN, will be recording a live episode of their new “Foul Shots” podcast from the venue.

Self Made opens play at the TBT at 6 p.m. Thursday against No. 6 seed Sideline Cancer at Wichita State’s Koch Arena. The former Jayhawks are a 3-seed in the Wichita region and need three wins there to advance to the Elite Eight in Chicago, where the eight teams still standing will fight for the winner-take-all, $2 million top prize over the final three rounds.

“I’m very hopeful that it goes well,” KU coach Bill Self told the Journal-World when asked about Self Made’s chances. “But there’s a lot of guys out there that can really play and take it really serious, so I hope our guys are locked in.”

According to Johnson, that’s not a concern.

In addition to a fun reunion for a handful of players who played together during their days with the Jayhawks, Johnson said Self Made’s journey in the TBT is all about taking it as serious as possible and treating it like they used to treat game days when they wore crimson and blue.

To that end, the team is expected to arrive back in Lawrence this weekend and run through a five-day mini-camp of sorts designed to fine-tune skills and get everyone on the same page.

Each day is broken down into individual work and team sessions and Self Made is planning to head to Wichita on Wednesday to make final preparations for Thursday’s tourney opener.

“We want to give people a little flashback to when we actually used to do it,” Johnson said.