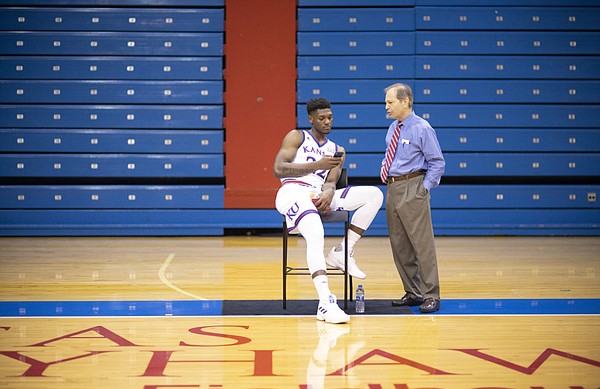 From his own temporary posts on Instagram that express his frustration to the tired tone in his head coach’s voice, the Silvio De Sousa waiting game appears to be taking its toll on the Kansas basketball program.

While both De Sousa and the Jayhawks remain hopeful that the NCAA will provide some kind of answer regarding his eligibility for the remainder of the 2018-19 season, waiting on that answer continues to be a disappointing endeavor.

Asked Wednesday night on his weekly “Hawk Talk” radio show if there were any update on De Sousa’s status, Kansas coach Bill Self once again had nothing new to report.

“No, no. It’s beyond frustration,” Self said. “And if we’re frustrated, imagine what the kid is. But he’s handled it beautifully.”

Although De Sousa has continued to work hard in practice and kept a good attitude around his teammates, Self said the sophomore forward who no doubt would provide the Jayhawks with a big lift for the final 10 games of the regular season if he were cleared, continues to struggle with the situation more and more each week.

A couple of weeks ago, Self characterized De Sousa as “crushed” by the situation. On Wednesday night, he went into a little more detail.

“He comes in every day and asks what’s new and comes in happy and leaves out sad, it seems like, because we don’t have any information to tell him,” Self said. “We’re still holding out hope that we’ll have information for him, but it’s been very disappointing that we haven’t been told anything yet. I’m sure that in whoever’s mind, there’s good reason that’s the case. But, for the youngster’s sake, it’s certainly been very frustrating.”

Meanwhile, De Sousa, who has not been made available for interviews since KU’s media day back in October, has posted temporary messages on Instagram during the past several days, all falling under the theme of begging someone to make some kind of decision.

However, even if that decision came back today and was positive for De Sousa and Kansas, Self cautioned against expecting too much too soon from the power forward from Angola.

In short, De Sousa might, for a week or two anyway, more closely resemble the player who struggled last winter than the player who helped the Jayhawks big time in the Big 12 and NCAA tournaments last March.

“He’s gotten better, there’s no question,” Self said. “But the reality of it is you can grow and get better but you can’t really practice him with the first group unless you have a good hunch that he would be declared eligible because you’d be taking reps away from guys that need that.”

“We don’t have the depth to practice 2 and a half hours every day. So he’s been basically with the scout team. And his attitude’s been great and he’s picked that stuff up really quickly. So he’ll be better because one thing that he’s learned how to do is he can (is understand), ‘OK, Iowa State runs this and he’ll remember how to run it, or Oklahoma does this,’ and for him to have to force himself to remember how all these other teams do things, that will help him with executing what we’re trying to do.”

But running scout team offense and trying to help a struggling Kansas offense on game night are two completely different things, Self said.

“The reality of it is, there’s no pressure playing on the scout team,” the coach explained. “If you throw it away, it’s not like it’s the end of the Earth. And getting guys to play the same way they would with Dedric (Lawson), when you’re playing with walk-ons, is a little bit different. Because on the scout team he knows he’s got to score or do whatever and sometimes you can develop some bad habits.”

Noting that he was speaking with more than a little blind faith, Self added: “Whenever he’s told that he could play, if that day ever comes, it’s still going to take a while before he’s ready to step in and be an impact guy. … If it does happen, it’s still not going to happen overnight, as far as impact. But we have no indication it’s going to happen, though, although we still ask every day and (are) holding out hope.”

I'm still betting we hear something on Silvio, probably a clearance, today .... tomorrow at the very latest.

The NCAA is totally unfair to these kids. They should be able to make a decision in 30 days. How many kids are in this situation, hundreds? No way, there cannot be more than 5 or 6 tops.

Frankly it looks like they don't have enough evidence to declare him ineligible, but they think he's guilty, so let's just let him sit, and the problem will go away.

Innocent until proven guilty, at least it used to be that way in this country.

God bless Silvio, God bless the USA, and to hell with the NCAA

Suzi, I would love for you to be correct. However, I must ask what makes you think that a decision is going to be made? Is there a lead or credible source that believes this? I don't doubt that you might be right, but I'd like at least someone from the university or a member of the media who has a solid fact base on this.

Suzi, you're wishing and dreaming. The NCAA is not about the kids. They are not going to make a decision. Any decision they make will be derided in the press by someone who thinks it should have been less/worse. As I've been saying for months, they just are not going to make one. They are going to say there are policies and protocols they have to follow. They are going to let it sit until after the season, wait for Silvio to declare for the draft or sign a pro contract and then say the issue is moot. The NCAA does not, and never has, cared about the players. If it doesn't put more money in coaches, AD's and Administrators' pockets, then they are not going to do it. Until Jay Bilas, Dick Vitale, Gary Parish et al take up the cause and embarrass them into acting, they just won't act.

No doubt I am wishing and dreaming. Clearly the NCAA wants to settle all the outstanding issues, which they have largely done the last week and this. Although that June hearing remains outstanding. Last week and this week have been very active. I thought last week would be a bit premature to hear something because we needed to wait our place in line. All indicators pointed for late this week, probably today, for some sort of decision. I have tons of faith in Silvio's attorney (Scott Thompsett). If we don't hear anything this week, I doubt Silvio plays this year and expect Thompsett will hit the NCAA a complaint asking for significant damages.

I am very impressed you correctly predicted a decision was going to be made this week, albeit not the one we were hoping for. I always enjoy your insightful comments.

So play him! Make the NCAA make a decision. Enough is enough.

So much of what Self is saying in regards to DeSousa and if he is ready to make an impact is just protecting him and keeping fan/media expectations in check. I have no question he will be ready. It will just take a game or two to get his game legs back. Players that can play will be ready.

Quick practical example from this season:
It did not take long for Ochai to get ready and in the flow and he had zero game experience. To be honest, I'm a bit baffled by our coaching staff with our roster. It's always difficult to project how someone will perform against a high level of competition, but I'm frustrated that our coaching staff put a redshirt on Ochai. After a summer and entire pre-season and comments from Self that Ocahi is probably their most athletic guy, why in the world did we want to redshirt him. Even with Udoka, you're telling me that our coaching staff didn't see his overall game being better than Moore, KJ, Vick, Dotson, Garrett, Grimes. Some of these guys have parts that are better, but Ochai does so many things well. In my opinion, the only potential argument here would be Grimes as he was such a high profile recruit and projections where high for him.
If we get DeSousa back I think our lineup is pretty solid and if Vick is not engaged then Garrett gets the start.

The more I hear about Silvio, the more I'm impressed by his maturity and patience.

Hey look, we aren't winning the league or anything else of any significance this year anyway WITHOUT Silvio, so just play him, flip the finger to the NCAA and make them do something about it.

Silvio - I don't know you and am confident you will probably never read this, but your actions, patience, restraint, and attitude are exceptional. I am glad that you are a member of the Kansas Basketball Team and hope the organizational grind of the NCAA can make a decision for you soon. Keep up the good work.