First came the phone call, then the decision and, finally, a wild debut for KU freshman Ochai Agbaji 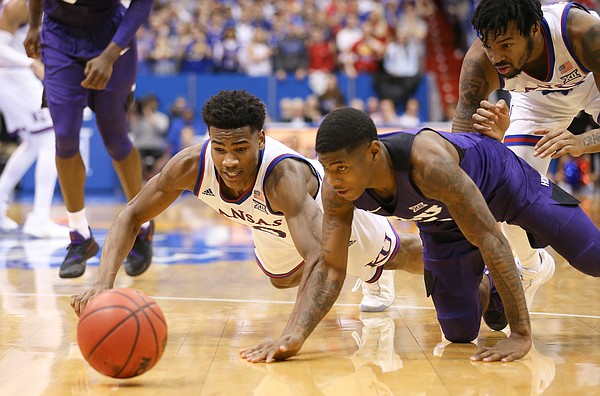 Kansas guard Ochai Agbaji (30) gets on the floor for a ball with TCU guard Kendric Davis (5) during the second half, Wednesday, Jan. 9, 2019 at Allen Fieldhouse. by Nick Krug

It’s been 34 years since Kansas basketball coach Bill Self last scored a point in an NCAA basketball game. But credit Self directly with seven key points during No. 7 KU’s 77-68 victory over No. 25 TCU on Wednesday night.

Last Sunday night, roughly 24 hours after a 17-point road loss at Iowa State, and less than 12 hours after learning that he would lose 7-foot center Udoka Azubuike for the rest of the season, Self grabbed his phone and made a call to a player he believed would be a big part of KU’s distant future.

What Self did not know when he began dialing was that the future was now and that the call had the potential to change the way the rest of the season plays out for the Jayhawks.

“Sunday night, I got a call from Coach Self just saying they want to pull my redshirt,” Kansas freshman Ochai Agbaji recalled Wednesday night after scoring 7 points in 25 dazzling minutes of his KU debut. “And after that they just said I’ll be practicing with the blue squad, running with them, seeing how I feel the next two days before the game.”

What the Jayhawks saw Monday and Tuesday was the same thing they have seen since the Kansas City, Mo., prospect from Oak Park High first reported to campus last summer after shooting up the recruiting boards from unranked to Top 150 in a matter of days last winter.

“The first time we played pickup, he got bouncy, he dunked one, he hit a shot and I was like, ‘He’s straight, ain’t he,’” recalled KU junior Dedric Lawson after Wednesday’s victory. “We knew what type of player he could be.”

Energy. Effort. Passion. Poise. Pride. And more than a little game to go with it. Agbaji flashed all of that during this week’s practices and again on Wednesday night, when he helped No. 7 Kansas hold off No. 25 TCU at Allen Fieldhouse.

His presence on the floor and energy off the bench, helped spark a Kansas offense that had looked stagnant in recent games and was still searching for how to move forward without Azubuike.

“It all came really fast, but it was good,” Agbaji said of the sequence that led to him being in uniform, instead of in street clothes, on Wednesday night.

Conversations with Self, his parents and a few other people close to him, helped Agbaji reach the decision that he was ready to play. He admitted Wednesday that he paused a little before deciding to ditch the redshirt only because he wanted to make sure it would be worth it.

"He trusted me, so I just went along with it," Agbaji said of his head coach.

Self, who Wednesday called Agbaji, “a cool kid,” said on Monday, before any final decision had been made, that he would not pull Agbaji’s redshirt just to give him spot minutes. And the Hall-of-Fame Kansas coach backed it up during Agbaji’s first night in action, giving him 13 first-half minutes and 12 more in the second, including the final few as KU fought to hold off a late TCU run.

Asked what it meant to him to still be on the floor with the game on the line, Agbaji lit up.

As for who he credited for keeping him calm and allowing him to operate more like a veteran than a wide-eyed rookie, Agbaji spoke of those who had experienced it before.

“It was really my teammates and the coaches,” he said. “They put me in the right position. They didn’t (put) any pressure on me to do anything, they just wanted me to make the right play and play to my athletic ability.”

Kansas sophomore Silvio De Sousa, one of Agbaji’s teammates who had been in the same situation more recently than most, also played a small role in Wednesday’s Agbaji launch party.

After checking out of the game for the first time following a stint of 7:08 on the floor in the first half — “They kept subbing and I was like, ‘I’m still in,’” Agbaji marveled — the 6-foot-5 freshman took a seat next to De Sousa on the KU bench.

“He was like, ‘It’s really different being out there,’” Agbaji recalled of De Sousa’s words in that moment. “I was like, ‘Oh, I’m tired,’ I was breathing really heavy. It really is (different) because you’re just having to think and there’s a lot going on.”

Said Self, referencing a similar path walked by De Sousa nearly one year ago to the day: “I asked Silvio, ‘What was it like your first time coming in?’ And his first time he touched it, he threw the ball to the fifth row behind the scorer’s table. He said, ‘He was good,’ considering he had that much poise and everything.”

One of the most impressive parts of Agbaji’s big night came long after the final horn had sounded. Sure, he was thrilled with how he played, even calling it “really good” during a postgame self-evaluation. And, yeah, he couldn’t wait to talk to his friends and family about his big night. But before all of that, Agbaji, on three separate occasions, made sure to point out that he could still get better.

It sounded a little like the words uttered by freshman point guard Devon Dotson throughout November and December and seemed sincere, not like he was searching for the right soundbite.

“It’s not easy to come into the Big 12 and play your first game (and) he was comfortable,” said Lawson, continuing to sing the praises of his young teammate. “He wasn’t rushed when he got the ball. He had poise. He knocked down shots. You have to tip your hat to a guy like that, who wasn’t highly recruited, with so much talent, to come in and produce for us. I’m glad he’s here.”

It is great that Ochai was able to come in and execute the way he did. Unfortunately, it's also out of necessity and points out what has been too big a whole so far this year - the bench. It is a definite headscratcher to me that Charlie's shot has been so absent, and KJ always seems to have a few too many caffeinated energy drinks in his system. Even Mitch as a Jr seems like maybe he's max'ed out his development potential and interest in being used much anymore. Great that Ochai has performed, but his even being in the conversation is less about Dok's injury and more about the others underperforming.

Thanks for finding that cloud in a silver lining. You must be great a parties and family gatherings.

I'm hoping he turns out to be another Steve Woodberry...only better! RCJH!!!