Marcus Garrett ruled out for Saturday's game vs. Oklahoma State 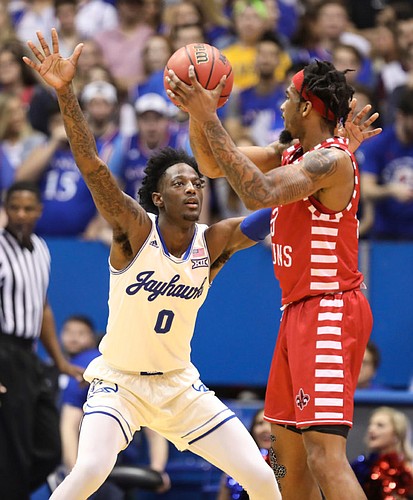 Kansas guard Marcus Garrett (0) defends against a pass from Louisiana forward JaKeenan Gant (23) during the first half, Friday, Nov. 16, 2018 at Allen Fieldhouse. by Nick Krug

Kansas sophomore Marcus Garrett will miss his third consecutive game because of the high ankle sprain he suffered in practice one week ago.

KU coach Bill Self confirmed Garrett’s status in a meeting with reporters before Friday’s practice.

“Marcus will be out tomorrow,” Self said. “So we’re going to be down, at least some men. But we’ve still got to go out and play and just step up and play better than what we played on Tuesday.”

The Jayhawks are 2-1 without Garrett in the lineup, with a win over Texas Tech and a loss to K-State this week. Garrett also missed KU’s win over Tennessee last November after suffering a concussion in the win over Marquette.

According to Self, the combo guard from Dallas who has emerged as KU’s best defender and one of the top defensive players in the Big 12 Conference returned to practice on Thursday but went about half speed and was not able to participate fully.

“We were pretty encouraged (Thursday) and then today, he didn’t take a step backwards but he was very sore,” Self said Friday. “... We’re hopeful that he can practice Sunday, maybe Monday. But the reality of it is we’re looking at next Saturday (as the) best-case scenario (for a return).”

Asked if Garrett was in good spirits despite sitting out to nurse the injury, Self scoffed.

“Yeah,” he said. “He’s tough. He’s the toughest kid we’ve got. And if he could play, he’d play. There’s just no chance of that right now.”

KU hosts Oklahoma State at 11 a.m. on Saturday and will travel to TCU for a Big Monday matchup at 8 p.m. Monday night.

The Jayhawks then will be off the rest of next week until hosting West Virginia on Feb. 16.

Guhhhhh -- does Brady Morningstar have any eligibility left?

I still think KU has a real shot at Big XII number XV, because of 9-0 in AFH. If that happens, I think everyone will vote HCBS as BXIICOY. The two teams ahead of us, we still play at home.

Dedric, Mitch, Dotson, Grimes and Agbaji with Mac, Moore and KJ on the bench is enough to beat the pokes.

Seriously Jay, "with Mac"?! You are seriously stupid......defending Mac couldn't play against K-State and now the Pokes! And now after losing to K-State you just name all the players "with Mac......on the bench" and you say it's "enough to beat the pokes." like it s a sure thing, you sound so stupid! No mention of HCBS changing his game plan or making lineup changes or trying something different. So with Mac, and KJ and Moore on the bench we are going to win!!!! I'm beginning to get it now.....you have absolutely no ideas, opinion or input on how we could possibly make improvements. All you can do is criticize others! What a freakin Dud!

Brian. If you'd post your Zip Code I'm sure someone can find you a mental health provider that accepts Medicaid.

Once again Jay no new ideas, just insults, and not even new ones at that. I have finally figured you out. Dud!

No Brian. I was hoping to help you. Nobody should be OK with the way you make a fool of yourself.

The Washington Redskins, a team of which I am also a fan, lost their their two top quarterbacks and their highly drafted running back all to injuries this season. Both quarterbacks, Alex Smith and Colt McCoy, suffered broken legs, for God's sake. I think I am a jinx. Throw me overboard. My apologies to my fellow Jayhawk fans.

Not sure we can miss Garrett`s 2-13 from the field during the past 2 games or his famous 3 point bricks and free throws. Also love his defense on the other teams 4's as they post up on him and back him under the basket for and easy dunk.

Your comments are all starting to sound the same, kind of like Jay's. No, Marcus isn't a 3-point threat or consistent scorer, but you can't just look at his last two games. The four games before that he's 23 out of 37 shooting with 55 points (which I know is above his average). And how many times has he been posted up and dunked on easily? Just seems strange to not want him back when we're already thin.

we got this game today, book it.