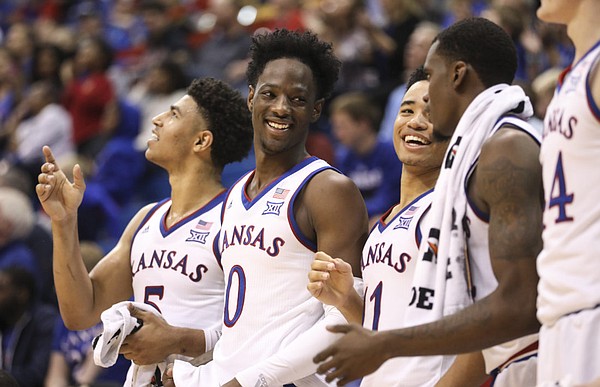 Kansas guard Marcus Garrett (0) and the KU bench get excited after a three by Kansas guard Ochai Agbaji (30) during the second half of an exhibition, Thursday, Oct. 25, 2018 at Allen Fieldhouse. by Nick Krug

Sidelined for KU’s past five games because of a high ankle sprain suffered in practice on Feb. 1, Kansas sophomore Marcus Garrett is expected to be in uniform for Saturday’s massive showdown with Texas Tech in Lubbock, Texas.

Garrett has practiced more this week than in the two previous weeks combined and Self said the sophomore’s progress has been good enough to give him hope for a return this weekend. There are still a couple of steps remaining before Self can deem Garrett game-ready and the KU coach explained what he would look for from Garrett during the next couple of days.

“Playing off one foot,” Self said. “(Some) guys play off two feet, some guys play off one. He’s a one-foot player. And it’s his left foot. So him being able to play off of that will be a determining sign and, as of (Tuesday), he could not. … Hopefully he can have a good day (Thursday) and trust it a little bit. Right now, I think it’s as much trust as anything. It’s hard for him to be able to explode off his left ankle.”

Still no news on Vick

Although the door still has not been officially closed for senior guard Lagerald Vick to return to the KU locker room at some point this season, there remains no news on his status, any progress or a return.

Self said Thursday that there was “no news to report on that front,” and the Memphis native, who has missed KU’s last three games after taking a leave of absence to tend to some personal matters back home, now is headed toward missing at least a fourth consecutive game as KU heads into the final two weeks of the regular season.

The Jayhawks are 3-0 in Vick’s absence and have averaged 81 points per game on offense while shooting .354 from 3-point range without their leading 3-point shooter.

No magic recovery for Azubuike

During last Saturday’s win over West Virginia at Allen Fieldhouse, injured center, Udoka Azubuike, appeared on the KU bench in a Kansas warm-up instead of street clothes, causing some KU fans to wonder if the wardrobe decision might be an indication that the 7-foot junior could still return to action at some point this season.

Self squashed that thought Thursday by having a little fun at Azubuike’s expense.

“I would say probably laundry,” said Self when asked why Azubuike wore the warm-up instead of jeans last weekend. “I mean, somebody asked me the other day, they said, ‘He’ll make a comeback, won’t he this year?’ No. No. He’s out until June. He is out.”

Self continued: “I guess maybe (wearing the warm-up was) laziness, coming over here and not getting his laundry done. But there’s nothing with that, concerning playing at all.”

Mitch Lightfoot says KU needs to take it one game at a time by KUsports.com

KU freshman Ochai Agbaji on having a week off by KUsports.com

Matt: Anything to report on KU's Silvio DeSousa eligibility appeal to the NCAA?

Does this (dis)organization handle ANY issue in a timely fashion?

Is Doke going through some physical therapy or rehab through the Athletics program or out in town? I know he's out, but want to hear a good prognosis on him for his future...I fully expect he also has played his last game in a KU uniform.

I am quite certain that Udoka would have a hard time even making the 2nd round of the draft. As for Vick the longer he is away and the team scoring victories harder for him to return. So far it is pretty mum reasons for the leave. Possible maybe his daughter and her placements. Just a guess.