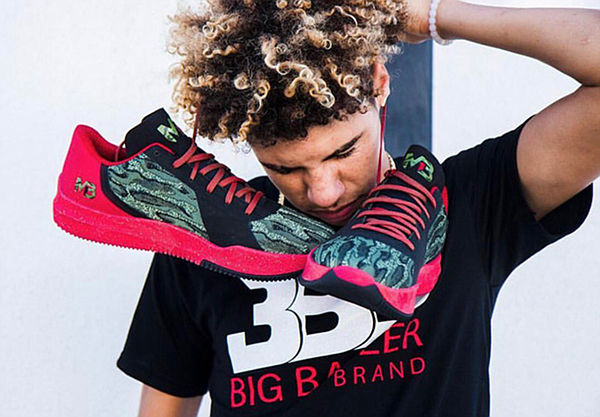 The past couple of days have created quite a frenzy for Kansas basketball fans who are not interested in seeing the youngest Ball brother, LaMelo, in crimson and blue.

Sources within the KU basketball program told me Wednesday night that the Jayhawks were not recruiting Lonzo Ball’s youngest brother nor had they ever had contact with LaMelo or his family about recruiting him to play at Kansas.

So no LaMelo. No LaVar. No circus.

The hysteria surfaced earlier this week because of a scene in the “Ball in the Family” reality series, where Lonzo and LaMelo were shown sitting around the kitchen table talking about LaMelo’s college plans.

The exchange was short and sweet.

Lonzo: Are you still trying to go to college?

LaMelo: Oh, I’m going for sure now. I actually talked to USC two days ago, talking to KU.”

USA Today college hoops blog “For The Win” reported that the conversation actually took place back in November, when the episode was being filmed.

But February, November, 2018, 2019; it doesn’t matter. Kansas has never contacted LaMelo ball about playing for the Jayhawks, and even if he does wind up going to college — a feat that would require some creative work-arounds in terms of his amateur status and NCAA eligibility — it will not be at KU.

For reasons beyond his popular family and loud-and-proud father, LaMelo is actually on the national recruiting radar, listed as a 5-star prospect, No. 13 overall, in the 2019 ESPN100 rankings.

The 6-foot-6, 180-pound guard, who once scored 92 points in a game back in 2017, currently attends the SPIRE Institute in Geneva, Ohio, where he landed after leaving Chino Hills (Calif.) High after his junior season.

There is reason to believe his college eligibility has been squandered because of his decision to sign with an agent before his brief, but highly publicized stint with a professional team in Lithuania.

He also has played games in the independent Junior Basketball Association, spearheaded by his father, has his own signature basketball shoe and has appeared as a spokesman for LaVar’s Big Baller Brand shoes and basketball apparel.

LaVar seems convinced that his son’s popularity and talent will inspire some college program to sign him. But don’t let the 2-second mention of KU on the Ball family’s reality show worry you into thinking that program will be Kansas.

That circus is the last thing KU needs!!

Good news. The only issue I have is that if KU is not recruiting him why does LaMelo say he has talked to KU. So who’s lying? It seems like in today’s society the word lying is taboo.

Did Lamelo actually say that he had talked with KU?

Maybe he did even talk to KU. That doesn't mean that KU is or was recruiting him.

Way too little information to suggest that one party or the other was lying.

I definitely see what you mean and get the semantics, but I can tell you that KU has never talked to the kid or the family about recruiting him to play at Kansas.

If LaMelo had plans or intended to talk to them, it never happened.

Doesn't mean anyone is lying. Just using your imagination for their benefit.

What a bum.... You know he only said those schools to try and stir up some bs for himself. Scum.

Didn't this POS already take $ playing overseas in that crap league with his brother? How is he eligible to play college ball? No thanks.

The Balls are bigger attention whores than the Kardashians! Don't bring that cancer to Kansas!

If they recruited him, I'd almost have to rethink my 60+ years of being a Jayhawk fan, since I'd have to puke every time their father opened his foul mouth.

KU might mean Kentucky University to the Ball Family!

And USC could be Southern Cal or South Carolina?

Good point. The La boys and dad are just stupid enough to call KY as KU. And criminal Cal would love to have a dirtball like this on his team.

I highly doubt that this kid will play college basketball. He quit high school to play in some third rate Euro league. I guess presumably they could have made some effort to maintain his amateurism... He still has to qualify academically, which I suppose he could do. But I honestly don't think that this kid has the drive.

He possibly had the potential to be as good or better than Lonzo, but Lonzo went out and did it at UCLA. He didn't have the world at his fingertips before he ever stepped on campus. He actually worked hard and accomplished his goals.

I think that Lonzo's success will be Lamelo's downfall. Everybody told Lamelo he was destined to be an NBA star, and yes I know that he's still young, but I've seen film of him and I don't think he likes discipline and hard work. If he does end up getting onto a college team it won't be a high major. Because he's not work the risk. It will be a minor program that is willing to accept the fact that he may be a disaster, because if it's not a disaster is will be a windfall for their program.

I hope that he does play in college and finds success, but I'm glad to hear that KU has no interest in him.

HELL NO. We do not need that circus at KU. I don't even care how good of a player the kid might be or how good of a person he could even potentially be. There is too much baggage that comes with him, the least of which is his amateur status.

After everything that this program and coaching staff has gone through in dealing with eligibility and recruiting of players recently, you'd have to be out of your damn mind to pursue a kid who we don't even know if he could play from day 1. That's another catastrophe waiting to happen.

Do not play with Fire again Coach Self. Please.

LaVar claims that LaMelo didn't get paid to play in Lithuania. I don't personally believe that (why would they go to Lithuania if they weren't getting paid?), but even if he's telling the truth about that, there's still the issue of whther him plaaying in his dad's league would screw up his eligibility.

What I've seen of LaMelo, he is a very selfish player who only cares about scoring a bunch of points himself. He doesn't even bother to run back on defense, let alone actually try to play at that end of the floor. Now, maybe he has changed his ways since he's gone back to high school, but in the past he wasn't the type of player who I'd want to have as a teammate.

To give him his due, he does have talent. I understand why he is ranked as a top recruit. He's not his middle brother, who was neverf considered a top-level recruit (although his dad is still trying to claim LeAngelo is an NBA-level player, haha). But between the eligibility issues and the family circus atmosphere, I'd just stay away if I were KU.

Isn't he a sophomore or a junior in HS? He's not even going to be in college until 2020-21 or 2021-22, is he? By then, maybe the NBA will have changed its rules about letting HS kids go straight to the pros.

"What I've seen of LaMelo, he is a very selfish player who only cares about scoring a bunch of points himself." Hmmmm.....Sounds like another La we know....

Many confuse Kentucky and Kansas, so maybe he meant Kentucky. I've heard people refer to Kentucky as KU who aren't as in the know. I could see Calipari recruiting him, his type of player.

LaMelo and Calipari sounds like a match made in heaven.