Relative struggles aside, Jayhawks still winning and capable of more; Will they deliver is the question 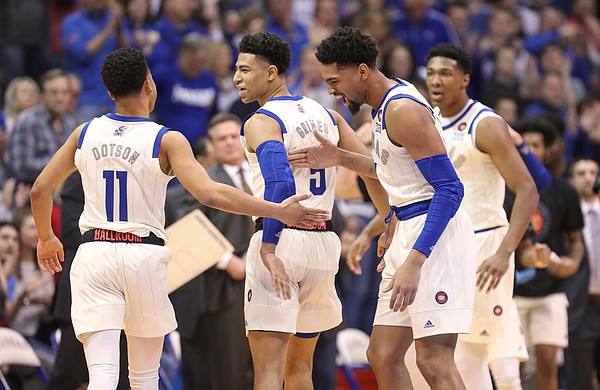 As positive as ever and happy to tell anyone who would listen that he was born without the part of the body that allows people to give up, Oklahoma State coach Mike Boynton was in no mood to hear about what a rough year it has been for the Jayhawks following last Saturday’s 84-72 Oklahoma State loss at Allen Fieldhouse.

“I know people around here have probably been freaking out because they’ve lost four games in the league,” Boynton said of Kansas and its fans during his postgame opening statement Saturday. “But they still have a Hall of Fame coach, still (have) got a really, really, good, probably first-team All-American-type player, and they still have one of the best home courts in all of America. Hats off to Kansas for finding their way after a tough loss on Tuesday.”

That coach, of course, was Bill Self. That player Boynton spoke of was junior forward Dedric Lawson. And that home-court advantage delivered by Allen Fieldhouse, where the Jayhawks are now 13-0 this season, has kept Kansas in the race despite those four Big 12 road losses.

So, too, can a season full of struggles.

Kansas encountered this, of course, through injuries to Udoka Azubuike and Marcus Garrett, the eligibility saga of Silvio De Sousa and, most recently, its lone senior, Lagerald Vick, taking a leave of absence for an undetermined length of time.

Vick missed Saturday. He won’t be in uniform tonight. And there’s no telling when, or whether, he’ll return before the end of the season, though several Jayhawks, including Self, have said they expect to get him back.

Even with all of those unusual occurrences, the Jayhawks’ plights look somewhat minor compared to what Boynton and the Cowboys have endured.

Whether you’re talking about OSU’s rough record, the Cowboys’ depleted and injury-ridden roster or the fact that midseason adversity also hit Oklahoma State hard, when Boynton dismissed three players reportedly because of their connection to a vandalism incident in Stillwater, Okla., Boynton’s club has had it just as bad as — if not worse than — the Jayhawks during the 2018-19 season.

Yet there the Cowboys sit at 9-14 overall and 2-8 in Big 12 play, with records that reflect their struggles, while Kansas, despite all of its issues — of which there are many — is rolling along at 18-6 overall, 7-4 in Big 12 play and still in pursuit of extending its Big 12 title streak to 15.

For a half, the two looked like equals and the scoreboard indicated that, with OSU and KU tied at 36 at the break on Saturday.

But in the second half, the Hall of Famer, the All-American candidate, the handful of former McDonald’s All-Americans and, of course, that home crowd made the difference.

The Jayhawks, even in their current state, have that in them. They’ve shown that in enough games, or at least halves, to move forward believing that, when things are clicking, they can still play and win at the level they’re used to.

Passion and pride seem to be the key to that, and these guys appear to be grasping that more and more each time out.

There’s no time like the present to find out.

Asked after the game what his team needed to do to bring the past two Allen Fieldhouse efforts on the road with them, KU junior Mitch Lightfoot spoke of consistency.

“Carry this feeling over,” Lightfoot said. “It feels good to get a win and to do it in a good team way and we’ve got to learn from this. If we can continue that energy we have, that we’re all feeling right now, I think we’ll play some good basketball.”

I know we've played well at home this year, but does anyone else think the AFH crowd has been entirely underwhelming this year? Particularly the student section. They'll get loud at certain times, but for the most part, the crowd has been a shell of its former self.

We are on the west coast so cannot observe it in person but we have noticed the same thing while watching the games on TV. Definitely different from prior seasons.

It seems like people say this every year. It could very well be. Smart phones probably play a role in that, but I'm sure that's not unique to AFH.

I think that most of it, at least for this year, is largely due to the fact that this team has not been particularly fun to watch.

Just wait until they play KSU later this month. It won't be quiet.

I think the students are about the same tbh. The alumni are probably frustrated with the season so far and the lack of consistency. That being said, they need to start standing and cheering more now than ever. When they get up and start cheering, the place becomes what we know it to be, an utter monster for an opposing team to deal with.

I haven't noticed a difference but IF, this is the season the streak ends I hope the AFH crowd sends the team off with a spectacular standing ovation at the end of the game on March 9. We don't storm the court but 14 in a row is worthy of one.