Jayhawks drop another spot to No. 14 in latest AP Poll 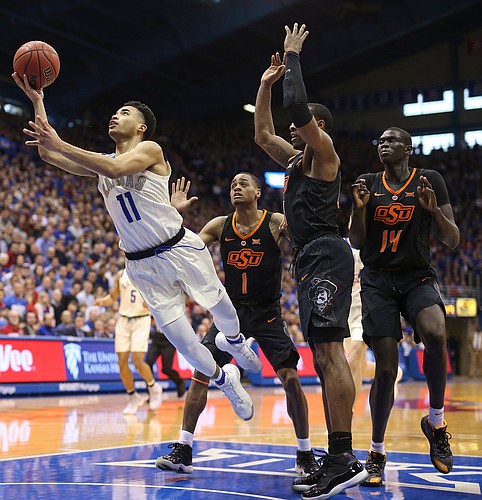 Kansas guard Devon Dotson (11) is tripped up on the shot during the second half, Saturday, Feb. 9, 2019 at Allen Fieldhouse. by Nick Krug

The Jayhawks, who sit a game-and-a-half behind first-place Kansas State in the conference race, remain the highest-ranked team in the Big 12 Conference, with Texas Tech (14), K-State (18) and Iowa State (23) not far behind.

Tennessee (22-1) held on to the top spot but gave up some ground in terms of first-place votes to No. 2 Duke (21-2), which picked 24 first-place votes this week — compared to 40 for the Volunteers — after an impressive road win over then-No. 3 Virginia last weekend.

Virginia (20-2) flipped spots with Gonzaga (23-2) and the Cavaliers’ only two losses this season have come to Duke.

Kentucky, Michigan, Nevada, North Carolina, Houston and Marquette round out this week’s Top 10.

Kansas, which is 1-6 in true road games this season, will face TCU at 8 p.m. tonight on ESPN's Big Monday at Schollmaier Arena in Fort Worth, Texas.

Check out our latest KU Sports Hour podcast for a deeper look at KU's road woes and whether the Jayhawks can find a path to success away from Allen Fieldhouse.

Duke looks pretty good. The best team I've seen this season but I've not seen enough of the competition to definitively say they are the best.