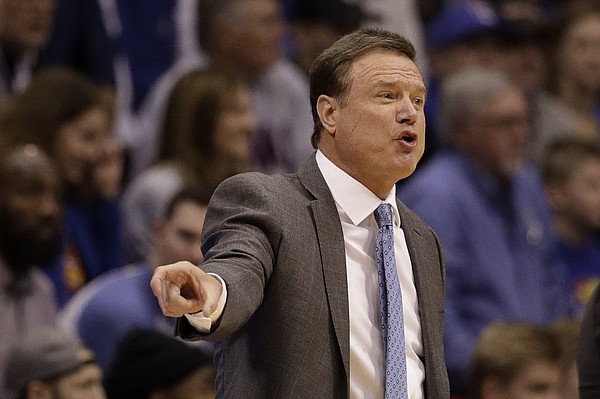 Kansas head coach Bill Self talks to his players during the first half of an NCAA college basketball game against Colorado, Saturday, Dec. 7, 2019, in Lawrence, Kan. (AP Photo/Charlie Riedel) by Associated Press

Mark down Monday, Dec. 9, 2019 as the most recent day when speculation surfaced about the future of Kansas basketball Bill Self being tied to the San Antonio Spurs.

For years, fans, media members and dreamers alike have linked Self and his coaching future to San Antonio because of his close relationship with Spurs general manager R.C. Buford. Self and Buford were tight in college at Oklahoma State and the two worked together at Kansas under Larry Brown.

The latest round seems to be more of the same.

In their latest NBA Coaching Carousel Preview, Sam Amick and John Hollinger, of The Athletic, wrote an entry about San Antonio that mentioned Self.

The Spurs, who are still coached by NBA legend Gregg Popovich and likely will be until Pop decides he’s done — not the other way around — are off to a 9-14 start to the 2019-20 season, following a 2018-19 season that saw the Spurs slip to the No. 7 seed and bow out of the playoffs in the first round.

While a 48-34 record and playoff appearance a year ago might not be reason to panic in most NBA circles, it’s certainly a departure from the norm for the Spurs, who have been perennial contenders and one of the toughest outs in the NBA throughout Popovich’s time there.

The entire premise of the Monday entry in The Athletic, which also includes coaching chatter out of New Orleans, New York, Chicago and Houston, is based around not how long the Spurs will let Popovich continue this trend, but rather how long he will want to.

The report wrote: “Whenever he steps away, whether it’s after he coaches Team USA in the Tokyo Olympics this summer or sometime thereafter, there’s one name that continues to come up from league sources as a possible replacement: Bill Self.”

Self has said repeatedly during recent years that he plans to be the coach at Kansas for a long time.

But, as The Athletic article points out, Self’s future is a little more in question these days with KU facing allegations and potentially severe penalties from the recent NCAA and FBI investigation into improper recruiting practices.

Because of that, Amick and Hollinger wrote, “It’s fair to wonder if now might be the perfect time for him to take on a new challenge. Again, of course, that’s all depending on Pop and what he wants to do.”

In addition to saying he plans to be at Kansas well into the future, Self has adamantly stated that he “won’t cut and run” from the NCAA sanctions facing the program.

What’s more, The Athletic’s report points out that the decision about who replaces Popovich, whenever that may be, will come down to a lot more than longtime friendships between noteworthy parties.

“A source with knowledge of the Spurs’ thinking is quick to make it clear that this monumental choice will be, first and foremost, about what’s best for the organization and not based solely on personal relationships,” the story reads. “Still, it’s worth monitoring and chronicling the deep ties here.”

The NBA is a tough gig. If he doesn't perform he is gone within 2 years.

The NBA is full of a bunch of spoiled babies. Who in their right mind would want to coach the un-coachable. NBA = Best athletes, worst basketball.

If RC and Bill want to remain friends, an offer of employment should not be made because there is a good chance he will have to fire him. The list of college coaches who have failed in the NBA is lengthy.

There have been a number of coaches who were able to crossover from college to the NBA and back. The good ones were probably better as NBA coaches than as college coaches. Bill Self is suited to coaching college kids and preparing them for a professional career. He may not be suited to deal with the egos of kids once they get to the Show. I’m thinking in particular of players Self coached at KU, such as the Morris twins, Kelly Oubre, and perhaps a few others.

Should we need to change basketball coaches is there anyone that feels we won't get a great coach.