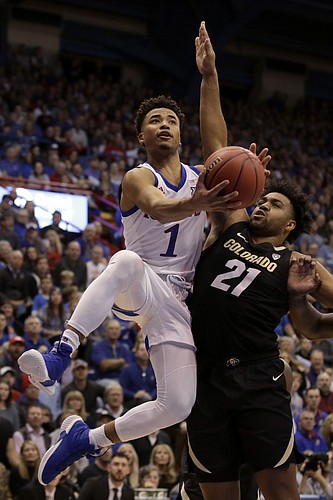 He finished 5-of-8 from the floor, scored 14 points and grabbed seven rebounds in 27 minutes during his team’s 72-58 loss to No. 2 Kansas on Saturday evening at Allen Fieldhouse.

By most accounts, Colorado forward Evan Battey was the Buffs’ best player against the Jayhawks.

But Battey’s numbers were purely secondary to the opportunity for the third-year sophomore to merely play in Allen Fieldhouse, let alone play basketball at all.

Two years ago, while playing pick-up ball with some friends, Battey suffered a stroke and a series of seizures that nearly took his life.

According to an account of Battey’s road to recovery by Pat Graham of The Denver Post, it took nearly a full year for Battey to entirely regain his feeling, movement and speech after the scary experience.

So, to him, every day since has been a gift.

“This is just the icing on the cake for me,” Battey said of the opportunity to play a game in historic Allen Fieldhouse. “I wake up every day thankful for life first and then basketball and school come second. To play in this place and in this atmosphere is just a blessing.”

Battey is far from the only one who feels that way.

There are a whole bunch of people back in California, along with friends and supporters around the country, who get extra emotional every time they see him take the court.

Former Kansas center Eric Chenowith is one of them. And Chenowith, who, like Battey, attended Villa Park (Calif.) High and played for the same high school coach, received a dozen or so text messages during Saturday’s game from the Villa Park family asking him if he was watching Battey play in his old college gym.

“My high school program’s really like a family,” Chenowith told the Journal-World via telephone on Sunday. “Old guys come back and work out young guys and we have barbecues together and really just all pull for each other at all times. I texted with Evan after the game and it was really cool, almost full-circle for me, to see him play at Allen Fieldhouse.”

The reason goes well beyond the health scare, though.

Chenowith, who temporarily coached at Villa Park about eight years ago, before Battey came through the program, recalled three different occasions when Battey was kept out of action.

The first time came during his senior season at Villa Park, when the California governing body for high school athletics ruled he had exhausted his eight semesters of eligibility. Despite not playing a single minute that year, Battey earned the Orange County Athletic Directors Association’s Athlete of Character Award for his support of his team and ability to smile through the situation.

Next, after signing with CU as the 122nd-ranked prospect in the country per Rivals.com, he was ruled academically ineligible for his freshman season in 2017-18. It was during that season when he suffered the stroke, and the recovery cost him a good chunk of the 2018-19 offseason and preseason.

He finally made his Colorado debut and return to basketball on Nov. 13, 2018, playing 20 minutes in a CU win over Drake.

Battey averaged 8.1 points and 4.4 rebounds in 21 minutes per game over 36 appearances and 11 starts last season. So far this season, Battey is averaging 9.4 points and 6.8 rebounds in eight starts for the 7-1, 20th-ranked Buffaloes.

And every one of them has made Chenowith and a whole bunch of Battey supporters smile from ear to ear.

“That was three major setbacks for someone who all he wanted to do was go out and play,” Chenowith said. “To see him persevere and pull through and finally be able to play and be successful is just incredible. Any time Evan’s on the court, it’s a good thing.”