Year In Review: The pessimist's take on the 2019 Kansas football season 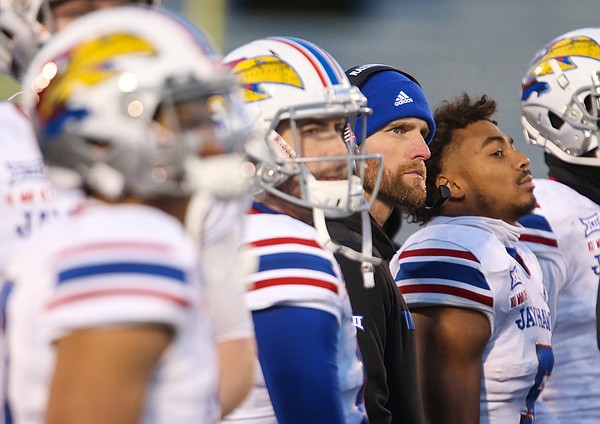 Kansas offensive coordinator Brent Dearmon watches a replay on the video board during the third quarter on Saturday, Nov. 30, 2019 at Memorial Stadium. by Nick Krug

Editor's Note: Before the 2019 Kansas football season began, I took a stab at a couple of different viewpoints on what was to come.

Now that the run is over and Miles and the Jayhawks have put the finishing touches on their 3-9 season, it’s time to do the same by looking back at the season that was and all that came with it.

After examining the optimist’s view first, we’re looking at the year in review from the eyes of the pessimist today.

If the ho-hum, same-old 3-9 record wasn’t enough to leave you pessimistic about the state of the Kansas football program, there were plenty of specific moments during the 2019 season that likely did the trick.

And, no, I’m not just talking about last Saturday’s 61-6 beatdown by Baylor in the season finale.

The 38-10 loss to Kansas State, the 31-13 loss at Oklahoma State and, yes, everyone’s favorite, that 12-7 home loss to Coastal Carolina in Week 2, all factored into how this season would be remembered.

But whether you focus on the win total, the moments of offensive ineptitude or the opportunities to win that just weren’t captured, the most difficult part about the latest Kansas football campaign in the eyes of the pessimists is that it left them with the same two-word question that they’ve had for the past decade — now what?

Was enough of a foundation put in place in Year 1 of the Les Miles era to make people think better days are ahead? Who will play quarterback for the Jayhawks next season? And can Kansas score enough points on a consistent basis to compete in the Big 12 Conference or win on the road?

All of those have been common questions during the past nine years and they all still exist today. Anyone who thought they wouldn’t was probably five slices deep into a little pie in the sky. But the fact that they remain heading into the 2020 season is not exactly encouraging.

There were plenty of reasons and plenty of players to get excited about during the past few months. But there never were quite enough.

What’s more, just about every time the Jayhawks did something to get the fan base fired up and ready to see what came next, they fell flat the following week and snatched away the enthusiasm as quickly as it arrived.

In short, no matter what they thought was going to happen, Kansas fans sat by scratching their heads while watching the opposite unfold — both good and bad.

No one saw the Boston College win coming after the Week 2 effort against Coastal Carolina. But after it did, everyone thought West Virginia was there for the taking one week later. The result? A Mountaineers team that finished 5-7 walked into Lawrence and won an uninspired game by both teams.

Later, after nearly upsetting Texas in Austin (again, no one saw that coming) and beating Texas Tech at home, Jayhawk fans were fired up to finally see a competitive Sunflower Showdown. So much so that they sold out KU’s home stadium for the first time in a decade. The result? Well, it looked an awful lot like so many other KU-KSU clashes in recent years, with the Wildcats winning easily in a game that was nowhere near as close as the 38-10 final score indicated.

It wasn’t all bad, of course. And there was a genuine sense around the program that it was worth tuning in each week because at least you were going to get a team that was capable of competing. They didn’t always do that. But this season’s struggles were as much about not finishing as anything else.

And if that type of inconsistent uncertainty doesn’t bring out a little pessimist in everyone, more power to those who can avoid it.

KU’s special teams were anything but special. The defense took a major step backwards, from being one of the top turnover-producing units a year ago to tied for last in that category this season and 122nd (of 130) in total defense. And the offense, as much as people wanted to believe it was, at times, as explosive as any in college football, still had too many quarters, halves and games of nothingness, which put the group 91st in the nation in total offense.

That’s not going to get it done. And while the possibility certainly exists for KU to improve and build from here, a quick look at the key players departing from this year’s roster illustrates that improvement of any kind in Year 2 might be tough to expect.

Now what, you ask? Brace yourselves for more of the same.

Yep. And what's even more disheartening is that for those of us who have been KU fans for decades, we've seen many more years like this than just in the last 10 years. There have been flashes of brilliance, even for a whole season or two, only to be let down time and time and time again.

Yet ... we've never quite had a coach like Miles. So I'll keep believing that Lucy actually WON'T pull the ball away this time and in two or three years we'll finally have some kind of real, lasting foundation. Hey, a guy can dream, can't he?

What you are hoping to see is the Year One to Year Two bump that good coaches traditionally create.

The first step was getting a big list of early commits. Since we haven’t heard of any recent decommits, it seems that most of that class will be on campus next year. This was a huge, huge step forward for the program - getting guys mentally onboard early. Of course, closing the deal is crucial.

Substantial progress next year would be 4 wins. Solid progress would be 3 wins with a significantly improved point differential, followed by another solid recruiting class. Without the four wins, though, recruiting will get tougher.

At least we have a coach, the support staff and the facilities (outside of the stadium) in place to actually compete now.

Let's see if he can get out of the gates from the very start because it took two weeks for this team to get going. That should not happen in year two.

I’m more optimistic after Miles first season than I was about his predecessors mostly because of his track record as a head coach. But it’s scary to think what will become of KU football if he is unable to turn this around. If an experienced head coach with his success is unable to get us back on track then who can.

It all starts and ends with the QB.

The conversion of Nolan Cromwell from defense to QB is just one.

Robert Griffin was electrifying, a discovery by a suffering Baylor program at the time (2-6 conference record his freshman yr. & Briles 1st: the previous year Baylor was 3-9 & 0-8).

It may end with the QB, but it doesn't start there. It starts with the offensive line.

We have to become competitive on the O & D lines! We are clearly the worst in the Big 12.

I'm with you Jeff Kallmeyer. Going into the season, there was a lot of talk about O-line being our strength. As we discovered in the very first game, that wasn't the case. Pooka can't get consistent gains if he's hit in the backfield every time. And no QB can hit open receivers when they're constantly running for their lives.

Three years ago, Baylor went 1-11 with a team that started 21, maybe even 22 freshmen. Guess who the one win was against. Anyway, now look at Baylor. If we have a stud class of freshmen coming in, I'm ok biting the bullet on a bad year for the promise of the 11-1 season Baylor has this year.

If anyone can make this turn-around happen, I'm betting on Les Miles and Jeff Long.

Last year we were 3 close losses away from being bowl eligible, which obviously was the coaches’ fault.

This year we were also 3 close losses away from bowl eligible. There were also 3 other first year coaches. We lost to 2 of the 3 and with a significant regression against one of them. We also lost once again to a non-power conference team.

I’ll remain optimistic for the future but have a hard time seeing this year as a success. Maybe treading water or a headbob.

It is good that we have an essentially full recruiting class though it is definitely lacking in Star power and big uglies. Not sure there is anyone that should be expected to contribute in year one, which puts us that much further away from relevance. We’ll see what happens with player development.

Of the four first-year coaches in the league, who inherited the worst program? In fact, who inherited the worst program in the country in FBS? Winning one of those three is actually a solid accomplishment. Beating a bowl team from the ACC on the road was a solid accomplishment. Miles won as many games in year one as Beaty did in year four - and he did it without knowing the players, having to assemble a staff on the run and recruit a class in a matter of weeks.

It’s clear that we are light years ahead in the coaching department - but it’s still going to be a grind.

I'd argue Rutgers was in a worse spot than us 12 months ago (and still is), although that isn't much to brag about. Ditto on every single one of your other points.

Next year, we will really see the test of Miles system. We take serious losses on paper, and we don't have hardly any offensive or defensive line recruits, so what you see, is what you get.

One facet of attack that I truly believe Miles would have done, if it had been possible, was a running game to use clock time, keep us in games, and give the defensive some rest.
Our line was just not good enough to do that. Pooka does a lot of it on his own, and that is a crying shame.

One thing that is going under the radar, is that Carter Stanley had a hell of a senior year. And the other thing is the mystery of why Beatty just wouldn't give a chance. His fellow players liked him, and they played hard for him.

Fact is if he would have played all of last year, he would have been even better this year, and he is now in the top 5 all time for KU touchdown in a season and career.

Look for some position changes with mixed results.