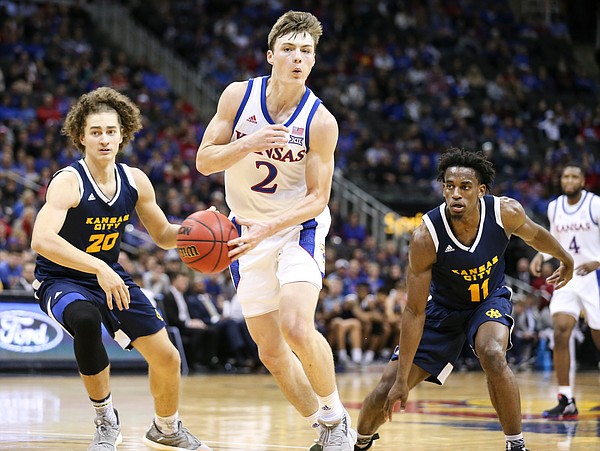 Kansas guard Christian Braun (2) whips a pass inside as he is trailed by UMKC forward Josiah Allick (20) and UMKC guard Franck Kamgain (11) during the second half, Saturday, Dec. 14, 2019 at Sprint Center in Kansas City, Mo. by Nick Krug

Pressed into extended action because of an ankle injury to junior guard Marcus Garrett on Saturday against Villanova, Kansas freshman Christian Braun bobbled the ball on one second-half possession and didn’t blink.

The moment was the perfect illustration of the type of poise and confidence Braun displayed in helping Kansas nearly claim a hard-fought road win against the 18th-ranked Wildcats in front of a rocking crowd of more than 20,000 mostly Villanova supporters at Wells Fargo Center.

Instead of letting the temporary juggling act derail the set, Braun calmly collected the ball and turned to make a play.

He did a lot of that in this one. Far more than his final numbers — 6 points on 3-of-5 shooting to go along with two big rebounds and a late block — suggest.

And it was Braun’s aggressive and unflappable performance, in a hostile environment against a Top 20 team, that had Kansas coach Bill Self encouraged about the outing even if he was disappointed by the outcome.

“I thought he was good,” Self said of Braun, who followed up a season-high 21 minutes against Kansas City the weekend before with his best overall game in 16 minutes against the Wildcats. “I thought Tristan (Enaruna) did some good things, too. They competed hard.”

That they did. And they had to, or else the Jayhawks (9-2) might have been cooked much sooner than at the final buzzer.

With Villanova leading by 8 early in the second half and the home crowd roaring with approval, Self subbed both Braun and Enaruna into the game.

At that point, things could have gone one of two ways. Either the freshmen could’ve wilted in the moment and the Wildcats could have run away with an easy and much more convincing win or KU's rookies could have locked in and proved they belonged.

Both players chose the latter, but Braun did his with more fireworks.

Three times in about a two-minute span after staring down that 8-point deficit, Braun drove the ball hard to the rim and either scored or created a scoring opportunity for a teammate.

Later, with Kansas trying to close — without Garrett, no less — Braun caught a pass on the wing opposite the KU bench, took a few dribbles to his left and finished in traffic for the and-one opportunity that put KU up 55-51 with 1:49 to play.

You might’ve seen that one. Or at least the aftermath. Braun emerged from the gathering of bodies like a wild man, screaming profanities that inspired his mother to remind him to “(watch) your language, son” on Twitter and firing up his teammates with every syllable.

The only thing that took away from the moment was the missed free throw that followed. As it turned out, it was a big one, as it would’ve given the Jayhawks 56 points in a game they lost 56-55.

But those things happen. And as much as the miss — among other things — took away the Jayhawks’ opportunity to win that particular game, they did nothing to take away from the massive moment of growth and confidence Braun gained from performing so well on such a big stage.

To see just how far Braun has come in the first two months of the season, all you have to do is go back to the other time the Jayhawks played a game like this — Nov. 5 in New York City, when the freshman played just four minutes in his KU debut and had a line of one missed shot and two fouls to show for it.

That’s a pretty big jump in just over seven weeks. And that’s exactly why Self left Philadelphia saying his team “got better” even in a losing effort.

“This is an important game,” Self noted. “But (Villanova coach) Jay (Wright is) very hopeful that he plays in a lot more bigger games than this, and I’m very hopeful of the same thing. This would be a great game to win, obviously, for seeding purposes for both teams. But in the big scheme of things, I think our team benefited from playing this game. … There were some things about the game that were positive for us growing up, even though the outcome wasn’t great.”

Even though he was referencing his own team’s gains from playing a program like Kansas, Wright, after the victory, shared a simple theory he has that applies to Braun’s most recent outing.

“You learn lessons from playing the best teams,” Wright said.

If that’s true, the lesson Braun learned by playing Villanova last Saturday was that he most definitely belongs on the court with anybody and the Jayhawks, with or without Garrett, are going to need more from him moving forward.

The poise is there now. The polish will come.

He comes up with the clutch block and the HUGE bucket pic.twitter.com/T51YNyC36T

None by FOX College Hoops

And if De Sousa is just more comfortable the team will be fine and deep. Not many days when Kansas will shoot so poorly. Or Villanova.