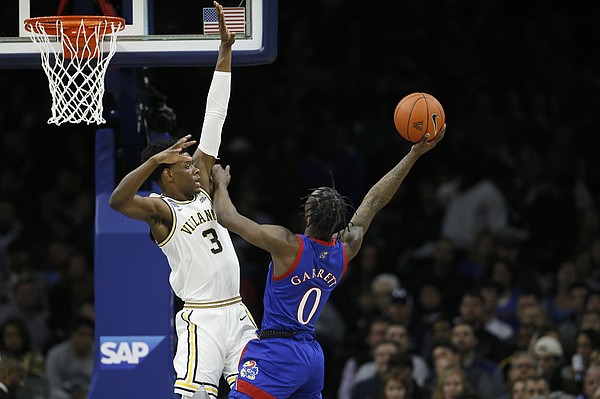 Kansas's Marcus Garrett (0) goes up for a shot against Villanova's Brandon Slater (3) during the first half of an NCAA college basketball game, Saturday, Dec. 21, 2019, in Philadelphia. (AP Photo/Matt Slocum) by Associated Press

No x-ray was taken on the injured right ankle of Kansas junior Marcus Garrett, according to KU coach Bill Self.

In a text message to the Journal-World on Sunday evening, Self also said that Garrett was “doing better.”

Injured late in the first half of Saturday’s 56-55 loss to No. 18 Villanova, Garrett left the floor with around four minutes remaining in the half and did not return to the game.

He was on the bench throughout the second half and, as KU’s most experienced player, did his best to help his young teammates from his seat next to the KU coaching staff.

Like many of his teammates, Garrett traveled home for the holidays from Philadelphia, landing in Dallas sometime Saturday night.

He’ll be there through Christmas and will report back to Lawrence with the rest of the team by Dec. 26 to begin preparations for Sunday’s road game at Stanford.

Garrett missed five full games with a high ankle sprain to his left ankle during Big 12 Conference play last season. Even after returning he never played at 100% the rest of the season.

There was enough optimism around the program Saturday night to suggest that his latest injury will not take Garrett down the same path this season.

Self said Saturday he did not believe the injury was “going to be something that drags out to conference play.”

Garrett is currently averaging 8.7 points, 3.8 rebounds and 4.2 assists in 28 minutes per game in 11 starts this season. He ranks second on the team with 19 steals and is shooting 48% from the floor and 37% from 3-point range.

The Jayhawks will travel to Stanford next weekend for a 2 p.m. clash with Jerod Haase’s club on Sunday at Maples Pavilion on the Stanford campus.

That game is slated to be televised by ABC.

Marcus, get well soon!!! We need you out there!! And I will make sure I meet you in person at the Haase Pavilion after your stellar play!!

We need Marcus if we are going to make a National run!!!!!

I really also hate the Pac 12. I went to see us play USC a few years ago and it gave me joy to see more KU fans than USC fans in a half full arena and us win by 30 points. Joy.

I want to see KU throw the Cardinal out of its own arena.

I wonder why no x-ray? does this mean he's fine and will be ready for our next game? not even a description of what it was...sprained?

No hurry. Give more minutes to Braun and Enaruna. Even if it costs us during the regular season it will be a price well paid to have him 100% when we need him most.

I covered my eyes when he went down. Even though we didn't win and lost the #1 ranking (I could care less about it), I'm happy the injury appears to be minor. Agree with Thomas. We need you Marcus. Heal fast.