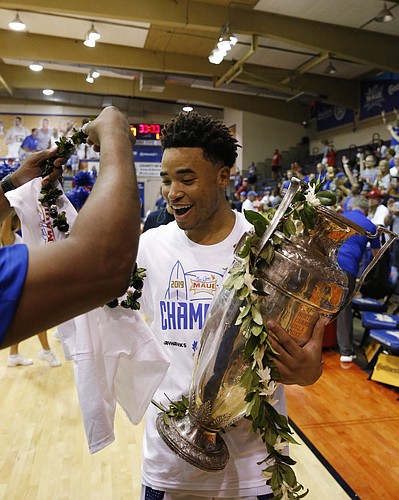 The Big 12 Conference on Monday broke the tie.

In KU’s three victories in Maui, Dotson averaged 21 points and 4.3 rebounds and also led the Jayhawks in assists (13) and steals (8).

Azubuike left Maui having averaged 18.3 points and 6.7 rebounds per game while shooting 83% from the floor to help KU bring home the title.

In KU’s championship game victory over Dayton, Dotson recorded career highs in points (31) and steals (5) while playing all 45 minutes of the overtime win.

Monday marked the second time in Dotson’s KU career that he had earned a conference player of the week honor.

Here’s what they need to do with that idiotic basketball dorm.... whichever team has the best season, gets the dorm for the next year. So women’s tennis and soccer get it for 2020. Men’s b-ball gets doubles in Oliver Hall with no meal plan. And they are required to go to class without tutors.

Merry Christmas to all, and to all a good night

Brett, When the Women's sports teams start contributing to the pot as does Men's Basketball, then maybe they will get their own dorms and meal plans. Sad, but it is a fact of life, that money rules the roost.

what the heck does Brett's post have to do with this article???

great job Devon. Wow was it major that we got him back this year or what? Having a solid experienced point guard is everything.

Sometimes we just want to say something but have no place to say it. We need a "Suggestion Box."