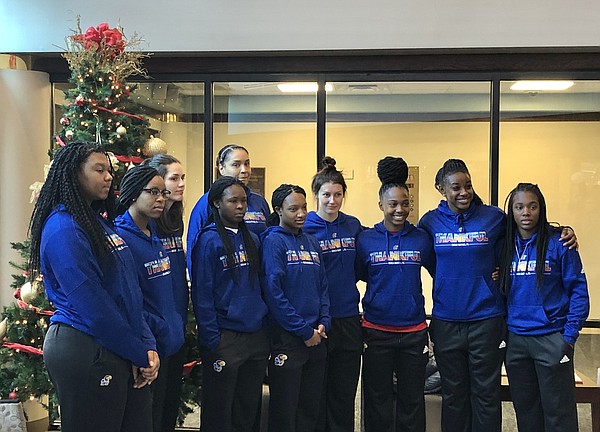 The KU women's basketball team huddles in the lobby of Lawrence Memorial Hospital for a holiday photo before bringing gear and cheer to LMH patients on Wednesday, Dec. 18, 2019. by Matt Tait

Their 9-0 start has brought plenty of joy to Kansas basketball fans at Allen Fieldhouse so far this season, but on Wednesday morning the KU women’s basketball team was handing out smiles in a new setting.

According to KU Assistant Athletic Director for Trademark Licensing, Paul Vander Tuig, who started the hospital visit tradition 27 years ago, roughly 85-90 companies donated items for the Jayhawks to give away to patients this year.

The Kansas players and coaching staff split into groups to tackle as many floors and wings as possible, giving away four full carts of KU clothing, posters, ornaments and other memorabilia to LMH patients.

“It’s the holidays and it’s just a really great time of the year,” freshman guard Chandler Prater said between visits on Wednesday. “I love kids so I was happy to stay in the baby station all day, but it’s just really awesome to see the mothers and their babies and put some smiles on peoples’ faces.”

KU coach Brandon Schneider, who has been a part of the tradition for the past five years, said Wednesday that his teams always have looked forward to these types of holiday outings.

“None of us like hospitals,” Schneider said. “But our players do a terrific job with this every year. To be able to bring some joy and light to those who are ill or injured I think helps our players understand the importance of servanthood and giving back and is really valuable.”

KU’s women’s team, which is off to a 9-0 start, received one vote in this week’s AP Top 25 poll, marking the first time this season that the Jayhawks had factored into the voting.

Schneider’s squad will travel to St. Louis for a 1 p.m. clash on Sunday before returning home to close out non-conference play on Dec. 30 against Wofford at Allen Fieldhouse.