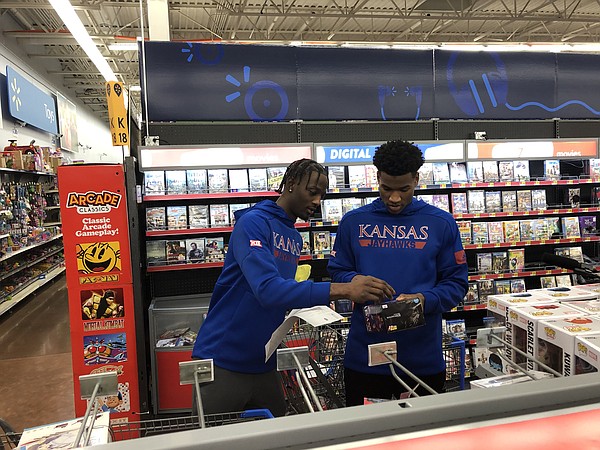 Before filling his cart with toys and holiday gifts for one of 15 local families on Tuesday night, Kansas forward Silvio De Sousa spent time studying his list with one of the KU basketball managers.

“Scouting report,” De Sousa joked before flashing a smile brighter than any Christmas tree in town.

For the 23rd consecutive year, the top-ranked Jayhawks broke into small groups at Walmart on South Iowa Street determined to fulfill the wishes of 15 local families by filling their shopping carts with toys, clothes and other items on their wish lists.

“It's really cool,” senior forward Mitch Lightfoot said before hitting the aisles. “It’s special for all of us to be able to give back to people who might not have as much as we do and aren’t as blessed as we are.”

From L.O.L. Suprise Dolls and science kits to Frozen II gear and toy monster trucks, the Jayhawks meticulously made their way through the store, spending most of their time in the toy aisles and electronics.

Asked if he had any strategies that he had picked up during his years with the program, Lightfoot said his game plan was simple.

“Don’t hold back,” he said. “Get a lot of little things. For adults, I usually go for one big thing or two big things and then the kids get a ton of stuff. If you think back to when you were a kid, you always liked to see a lot more stuff than just one thing so I’m just kind of being a kid.”

Using money raised by former KU basketball player Roger Morningstar and his wife, Linda, through a connection with the Salvation Army of Douglas County, each player was allowed to spend $100 per family member and each family included an average of four people.

Those were the only rules put on the annual shopping adventure. The rest was up to the players, who constantly checked in with one another to see who had the best looking cart.

Most were paired up, either with a teammate or a manager, but junior guard Marcus Garrett spent the bulk of his time roaming the aisles on his own.

“Seniority,” Garrett said with a smile as he searched for an item for the kitchen.

Kansas coach Bill Self, who was on the road recruiting for most of the day Tuesday, made it back to town just in time to catch the tail end of this year’s shopping fun. Self, who arrived at the store just before 10 p.m., checked in with his players on their way out the door to see how they did in the role of Santa Claus and to make sure they were performing well on their finals.

At least a couple of players arrived at Walmart fresh off of finishing a final.

“This is fun,” sophomore guard Ochai Agbaji said. “I think it shows a lot about us as a program and what we do for our community.”

Asked for his strategy, Agbaji outlined one similar to Lightfoot’s.

“Whatever is on the list, I’ll try to go over and beyond what they want,” he said.

The Jayhawks were off on Tuesday and are scheduled to practice in the late morning on Wednesday to begin getting acclimated for Saturday’s 11 a.m. tipoff against No. 18 Villanova in Philadelphia.