Dotson named Player of the Week, KU No. 2 in NET rankings and an apology about the latest ESPN+ broadcast 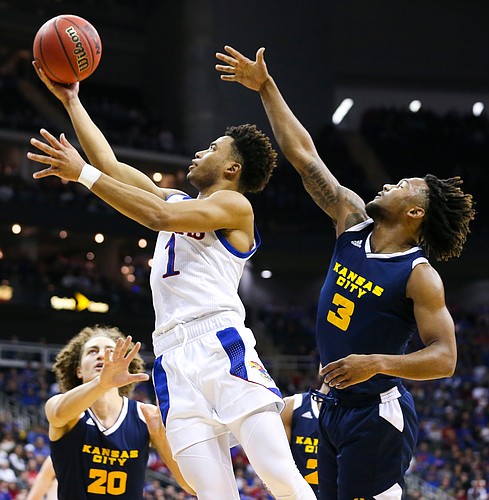 Kansas guard Devon Dotson (1) gets in for a bucket past UMKC guard Brandon McKissic (3) during the first half, Saturday, Dec. 14, 2019 at Sprint Center in Kansas City, Mo. Also pictured is UMKC forward Josiah Allick (20). by Nick Krug

The Big 12’s leading scorer once again has been named the conference player of the week.

Kansas sophomore Devon Dotson earned the honor for the second time this season after averaging 20 points, six assists and 2.5 steals in wins over Milwaukee and Kansas City last week.

Dotson is currently averaging 19.6 points per game for the season, and his big week included 22 points against Milwaukee and 18 in the runaway win over Kansas City at Sprint Center on Saturday. He also recorded a career-high nine assists against Milwaukee last Tuesday while dishing out three more against the Kangaroos, giving him a weekly assist-to-turnover ratio of 6-1.

Self last week called Dotson’s status as the Big 12’s leading scorer “a shocker to me,” which spoke to the rapid improvement the point guard has made from his freshman season to now.

“To be honest with you, I see him continuing to score at the same clip,” Self said. “He’s almost averaging 20 a game, and I think that even though that’ll probably drop — all stats drop when you get into conference play — I think that’s the thing that I would say he’s improved at the most is just some intangibles and then his confidence to try to score the ball.”

The 6-foot-2 sophomore from Charlotte, N.C., also earned Big 12 player of the week honors earlier this season after his stellar showing during the Jayhawks’ run to the Maui Invitational title in which he scored 31 points in the championship-game victory over Dayton.

Dotson now has received three Big 12 weekly honors during his KU career. He also was named Big 12 Newcomer of the Week on Dec. 31, 2018.

In addition to leading the conference in scoring, the KU point guard currently ranks among the Big 12 leaders in field goal percentage (fourth at 50.4%), assists (sixth at 4.8 per game), free throw percentage (fourth at 85.3%) and steals (third at 2.2 per game). Dotson has scored 10 or more points in 16 consecutive games dating back to last season and has scored 17 or more points in nine of 10 games so far this season.

Now in its second full season as a ranking tool, the first NET rankings of the 2019-20 season were released Monday, with Kansas sitting in the No. 2 spot behind Ohio State.

San Diego State, Butler and Baylor round out the Top 5 in this season's initial NET rankings.

Introduced in 2018 as the newest way to sort and evaluate college basketball teams, the NET (NCAA Tournament Evaluation Tool) incorporates many of the same measurements previously used by the RPI rankings but also adds some of the modern-era efficiency numbers to create a more complete ranking of the nation’s Division I basketball programs.

The most visible components of the NET rankings are game results, strength of schedule, game location, scoring margin, net offensive and defensive efficiency and the quality of wins and losses.

Based on those metrics, teams are divided into Quadrants and the teams with the most Quadrant 1 and 2 wins typically rise to the top of the rankings.

Kansas is currently 3-1 against Quadrant 1 and 2 opponents and has the potential to play more than a dozen more the rest of the way.

Last Saturday’s broadcast of the KU-Kansas City contest on Big 12 Now/ESPN+ featured several moments where the picture cut in and out or the images on the screen were hard to view.

KU and ESPN on Sunday each released statements explaining the glitch.

“Our production of the Kansas City vs. Kansas game on Saturday night from Sprint Center experienced isolated intermittent transmission issues that occasionally impacted the audio and video feed,” ESPN explained in its statement. “We apologize for the issues and their impact to fans.”

Kansas Athletics followed up with the a similar apology, pinpointing ESPN’s hiring of a “production truck” as part of the problem.

“We consulted with ESPN who confirmed the issues were isolated to this particular game production,” KU’s statement read. “We apologize for the inconvenience.”

My hat those were "isolated" and "occasional" issues that affected audio and video feeds They were FREQUENT video outages, block-filled video, audio outages, and stuttering audio. That was probably the worst video/audio stream I have ever witnessed during a game. And I'm paying for this!

My experience with ESPN+ has been pretty flawless up until now, but I know lots of people have griped about it for a while. So this was an isolated incident for me. If it continues, I'll be annoyed.

On another comment thread, I had said that I've never had any issues with the ESPN+ live stream, but it sounds like I would have endured these issues had I been able to watch this particular game.

I couldn't even access the game. It kept saying, "Video unavailable at this time, try again later." I called ESPN immediately, but that was like talking to the wind. I called again today. I'm not sensing that the higher ups are really all that concerned. This is the second time this has happened to me. It happened with the Monmouth game. Both times the excuse was given that their system was overloaded. Give me a break, that's their job to provide service. If they are getting overloaded, they need to cut back on what they're offering or whatever. Paying customers should get better service. If this isn't corrected, KU and the Big XII need to look elsewhere. The lady I spoke to asked me to access the site today and see if I could get the game. Of course I could, but I don't want to watch a game after the fact when I paid to see it live! I didn't have any trouble last year but this year is different.

I watched the game from South Carolina. The issue was annoying, but did not affect my enjoyment of the game. Normally, ESPN+ broadcasts are excellent.

Unlike some of you, I've had similar feed problems with every game on ESPN+ so far. This was the worst one by far bc it also included some bricking. Loss of sound, then the picture has been the rule with all games. The only resolution I've found was patience and to close out and get back into the app again.

I called ESPN+ Customer Support after the last game and was told to re-boot by unplugging the TV and the router for 2 minutes. Haven't done that yet, but know that is an option.

this is why I hate streaming services! go back to cable, I never had any issues at all with cable

I just hate the fact that so many games are on ESPN+ and not TV to begin with.

And I say this as someone who is an ESPN+ subscriber and enjoys it.

It seems the last several seasons we'd have a lot of games on ESPNU (or even ESPNews).

Now those games seem to have migrated to the internet.

Get rid of ESPN+ game coverages!

It should be noted that the ESPN+ broadcasting problems on Saturday weren't new. They had the same problems in a previous broadcast.

The question is: Why did KU pick ESPN+ to broadcast their games? First of all, fans have to pay a premium to get ESPN+, and secondly, you can't get it on your television, but rather only on your computer. And then, you have to put up with all their problems associated with their airing.

KU should reconsider to air their games on ESPN, CBS, NBC or some other reliable outlet.

Why did KU pick ESPN+ to broadcast their games? Because espn has deep pockets and likely offered a lot of $$$.

CBS and NBC are national networks, and do not produce local or regional sports. Espn only does on the + channel. The NBC regionals that were previously Comcast Sportsnets produce regional games (now known as "nbcsportsnet") in cities like Philadelphia and San Francisco. Spectrum is in LA. Fox is the regional network in the Kansas City area. I don't know if Fox tried to negotiate for the KU games, but certainly espn would win that bidding war. And the Fox regionals have restructured in the past year.

The networks are simply following the lead of those who are cutting the cord. They are investing in Facebook and Twitter shows with an eye toward the future. Some local production will remain, but there is a push to eliminate truck shows, and broadcast from remote studios. The Pac-12 networks does this.

Production trucks are generally not owned by the networks, but by private companies. They travel around the country, booked on different shows. Some technical issues are specific to a venue, and often local tech managers or engineers are better equipped than an out-of-town crew to deal with transmission or data issues. Plenty of sh!+ happens in live tv. Almost none of it is ever seen by the audience.

Statistics, sponsors, and social media now dominate - all with the goal of capturing increasingly short attention spans and rapidly changing viewing preferences. It's complicated. But, like Joe Black says, there is still cable. Life is a trade off. Rock Chalk!

Is there any way to DVR Espn+? My two biggest problems with ESPN+ is the poor video quality relative to cable, and second that I have not found a way DVR. That and the additional cost makes me wish KU had not gone to this outlet.