Jayhawks willing to embrace No. 1 ranking - if it comes 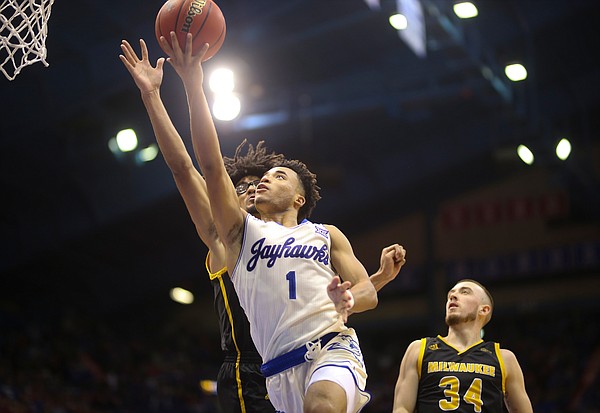 during the second half, Tuesday, Dec. 10, 2019 at Allen Fieldhouse. by Nick Krug

Not surprisingly, Kansas basketball coach Bill Self’s first thought after learning of Texas Tech’s upset of No. 1 Louisville on Tuesday night was about the Red Raiders and the Big 12.

From there, the topic quickly shifted to what Tech’s victory meant for Kansas, which entered the week at No. 2 in the polls and could be poised to move into the top spot with a win this weekend over Kansas City at Sprint Center.

“We’ve still got to take care of business Saturday,” Self noted of the 4 p.m. matchup with the lowest-ranked Division I team on KU’s schedule this season per KenPom.com. “But we’ll be in the discussion if we take care of business. But I think this early season it really doesn’t matter much.”

That’s certainly the party line and the safe and smart thing to say. KU sophomore Ochai Agbaji noted the same though in his postgame comments Tuesday night and history is full of soundbites from Kansas players saying the rankings at this time of the year simply do not matter.

But while most coaches have shown a tendency to shy away from taking about being No. 1, Self had no problem embracing the idea.

“I would certainly welcome it with our program,” he said. “I think any time you can do that (it’s a good thing). Of course, later in the season is far better than now. You know, if you do it in January or February it’s far better than now, or even March would be the ideal time to do it.”

But if the voters put the Jayhawks at the top of the polls in December, Self will take it. And, more to the point, he’ll likely use it to his advantage.

A master motivator in just about every way, the shiny No. 1 ranking, if it comes, merely would give Self another tool to use to keep his players locked in on what they’re supposed to be doing.

Picture this: Monday afternoon, after KU ascends to the top spot in the polls, the Jayhawks are at practice beginning preparations for their Dec. 21 game at Villanova. Midway through the session, things get sloppy and a drill features more mistakes than moments of flawless execution.

Minor stuff, to be sure. But for a Hall of Fame coach who has made a living out of getting the most out of his players by pushing the right buttons at the right times, Self has proven that he can and will use everything at his disposal to keep his club sharp.

Before anyone gets too far ahead of themselves, though, it’s important to remember that two things still have to happen for Kansas to be ranked No. 1 for the first time since late December of last season, when the Jayhawks ran out to a 10-0 start before losing to Arizona State on the road.

First, KU has to beat Kansas City on Saturday. After that, the Jayhawks actually have to be ranked No. 1 by the AP voters.

“I’m not sure we would be because, obviously, (No. 3) Ohio State’s got an impressive resume and they’re undefeated,” Self noted. “But I don’t think being No. 1 is exactly where anybody really wants to be, because they haven’t stayed there very long.”

Four teams ranked No. 1 in the AP Top 25 already have fallen this season, with preseason No. 1 Michigan State losing its season opener to Kentucky, the Wildcats falling to Evansville at home shortly thereafter, Duke losing to Stephen F. Austin at home a couple of weeks after that and Louisville losing to Texas Tech on Tuesday night.

For what it’s worth, Kansas edged Ohio State for the No. 2 spot in this week’s poll by just 22 points, 1,486-1,464. Beyond that, it was the Buckeyes, with five, who actually received more first-place votes than Kansas, which earned four in this week’s AP poll.

So simply sliding into the top spot is not automatic, particularly if Ohio State (9-0) wins at Minnesota on Sunday.

The Buckeyes are currently ranked in the No. 1 spot in the KenPom.com rankings, four spots ahead of the Jayhawks.

No. 1 or not, this Kansas team continues to put it’s focus on getting better, becoming a team and setting the stage to accomplish big things down the road.

“We see it as No. 1, but the bigger picture is we have other goals this season,” Agbaji said Tuesday. “And early on the rankings don’t matter. Our goal right now is to win conference and start dominating that again. So, I’m ready for that and I don’t think rankings really matter.”

After Saturday’s game with Kansas City, the Jayhawks have just two more non-conference games remaining — at Villanova on Dec. 21 and at Stanford on Dec. 29 — before the start of Big 12 play, which opens Jan. 4 at Allen Fieldhouse against West Virginia.

1] I'd rather be number 1 than not, but at this stage in the season, at least it can serve as a bell weather of where the team is.

3] After Kansas City [it will always be UMKC for me], it is quite possible with games at Villanova and Stanford, Kansas will be the fifth number one to fall this season.

4] The specter of the NCAA ruining this season is always in the background but let's enjoy the ride while we can, then, if the hammer falls, sue the crap out of them!!

It doesn't really matter this early.. Ohio State has a shot at being#1 really couldn't argue against them taking that spot.

Oh I'm sure OSU will take the #1 spot. The votes already show this much.