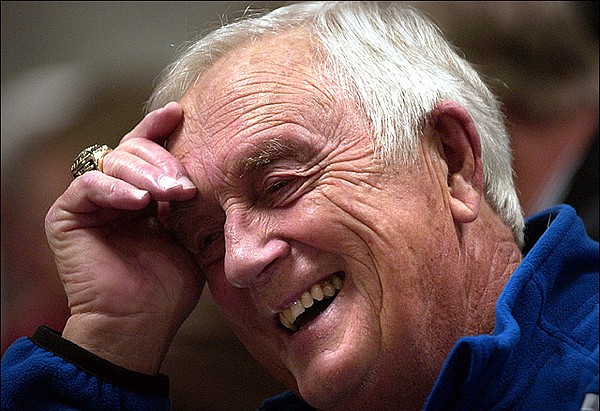 Longtime Kansas University basketball radio broadcaster Max Falkenstein enjoys a laugh in the media room prior to the start of a 2006 home game against Yale at Allen Fieldhouse. by Nick Krug

When former radio broadcaster Max Falkenstien died in late July at the age of 95, Jayhawks everywhere jumped at the chance to share their best stories of the man who called KU games for 60 years.

On Saturday, the party will continue at the Lied Center on KU’s campus.

In conjunction with Kansas Athletics, Falkenstien’s family is hosting a celebration of life for the late KU broadcaster at 2 p.m. The event will feature several notable speakers and will be emceed by Falkenstien’s longtime friend and broadcast partner, Bob Davis, who no doubt will share a few of his own best Max stories with the crowd.

The event is open to the public and free of charge and is not expected to last more than an hour.

It is hard to predict just how many former and current KU players, coaches and administrators are expected to attend, but the celebration figures to attract Jayhawks from several decades and across multiple generations.

Added former KU men’s basketball coach Larry Brown: “When you talk about those great (KU) people, and everyone connected with all that tradition, Max is one of the first people you think about.”

Because he was around him just a short time, current KU Athletic Director Jeff Long is eager to hear as many Falkenstien tales as time allows.

“I, of course, knew of Max for many years as the iconic Voice of the Jayhawks,” Long said. “I am so happy that I had the opportunity to meet and talk with him this year. He was everything everyone had told me about him – engaging, funny – and he made me feel right at home.”

Wish I could be there. And even more so, I wish I had met him.