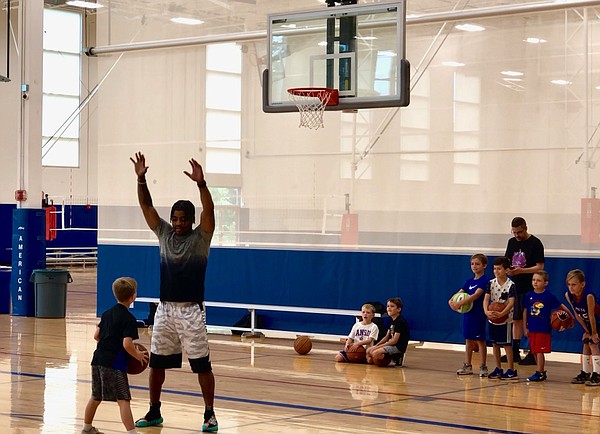 Former Kansas point guard Frank Mason III was back in Lawrence on Friday, conducting the third and final day of the Kansas tour of his annual summer camp.

With the help of former K-State guard Will Spradling, Mason ran through drills, showed off his skills and interacted with the 30 or so campers who showed up at Rock Chalk Park to see the former Jayhawk.

“This is always fun,” Mason said Friday. “I love being around the kids. I love giving back and just love helping them, helping them become better young men and better basketball players.”

The Lawrence camp — which followed similar sessions in Wichita and Olathe on Wednesday and Thursday — was supposed to be the start of an all-Mason type of weekend. His annual charity softball game was scheduled for this weekend in Kansas City, Kan.

But Mason’s professional obligations, which now include adjusting to a new team and new surroundings, proved to be too much for the softball game to carry on. Mason said he planned to bring the game back in the future, but wanted to spend the rest of the summer getting settled in with the Milwaukee Bucks, who recently signed him to a two-way deal, which will allow him to split time between the Bucks in the NBA and the Wisconsin Herd in the G League.

It also will allow Mason to play with reigning NBA MVP Giannis Antetokounmpo, with whom Mason actually has a brief history.

“I got a chance to work out with him and play one-on-one with him in Las Vegas during Summer League,” Mason said of the man they call The Greek Freak. “It was pretty big time. We did a lot of one-on-one, a lot of skill work, and also worked out with (fellow Bucks) Khris Middleton and Pat Connaughton and it was a good time. We all got better and just watching him live and watching his work ethic was unbelievable. I’m just excited to be a part of the team and to get to play with a guy like that.”

Asked what he liked about Antetokounmpo’s game, Mason did not hesitate to answer.

“Everything, man,” he said. “He’s a 7-foot bully on the court. He’s unstoppable in transition, he’s almost automatic around the rim, he super coachable and he’s humble. I’m excited to play with him and he should make my job a lot easier.”

As for Mason’s new NBA home, his representation, newly certified NBPA agent Isaiah Garrett, said the Bucks represented a fresh start for the former NCAA national player of the year.

“It’s just a great organization, obviously, with Giannis and them making it to the playoffs the last couple of yeas and they have a great chance of winning a championship,” Garrett said. “They were only missing a few pieces, some backup pieces, and I think they feel like Frank could fit in with what they need.”

One other aspect of the move that has Mason and Garrett excited is the looming KU connection, with former Kansas walk-on Chase Buford recently being named the head coach of the Herd.

“That’s a great connection,” Garrett said. “I know Frank has a really good relationship with Chase and is really looking forward to working with him... Frank noticed that when he first heard that the Bucks were interested.

“Frank’s always been hungry," Garrett said. "I don’t think he ever lost that. Sacramento just wasn’t the right fit. The opportunities weren’t there for him. We have a great relationship with Sacramento. They have a great organization and it was a blessing for them to go ahead and waive Frank as early as they did so he could find a new home. He’ll continue to work hard and make the best of his situation with Milwaukee.”

Frank Mason III was back in #KUbball country today for his third annual youth camp. Caught up with him about his new gig with the Bucks. More on that soon... Now, a glimpse at Campers v. Frank. pic.twitter.com/ZYLsHx81jF

Mason looked so much better than the boys he was facing. You'd think he would be playing against higher level competition to get better. I guess he loves sandbagging. I never knew that about him.

I wouldn't be at all surprised if Frank is part of the Bucks' regular rotation by the time the playoffs start. He'll always have a special place in my heart, and it's such a shame that he never got to play in a Final Four.